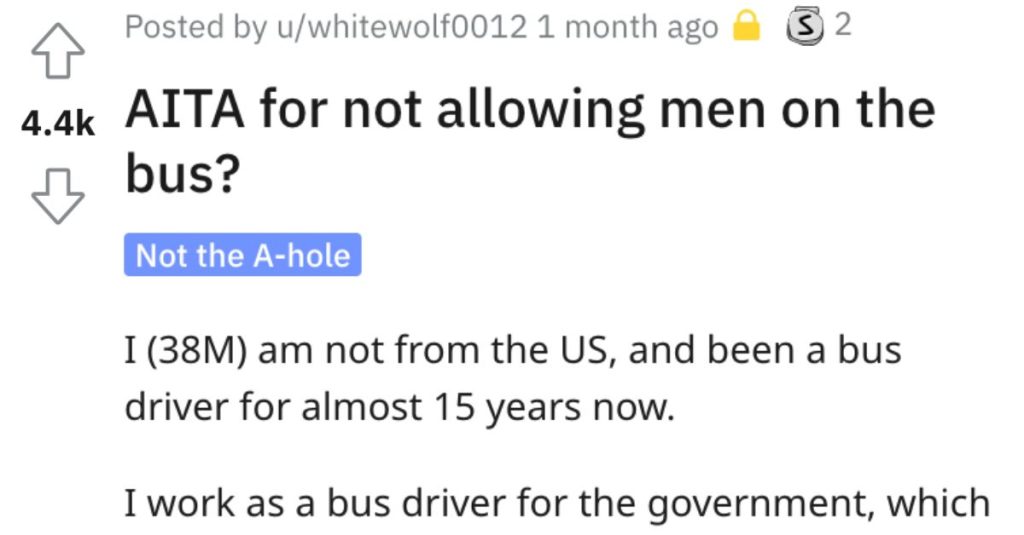 This Bus Driver Refuses to Let Men Ride His Bus. Is He Wrong?

No men on the bus!

Hmmmm, that’s not something you hear every day…

AITA for not allowing men on the bus?

I work as a bus driver for the government, which has some special busses for certain universities but most importantly for the majority of the all-girls dorms since the dorms are pretty far from the colleges the girls attend and most of them dont have a car.

In both my training and early work days, other coworkers always told me about how while it’s not technically allowed, it’s cool to let other people ride the college special bus because public transport is a disaster. By people I mean people who are not college students.

I was wary of this because yeah it’s nice to help someone out from time to time but I probably won’t ever see that person again and they might do something to the students. Cuz we are talking about a bus full of 19-23 yo college girls with the exceptions of the 5 or 6 dudes that i know attend the same colleges.

Well up until now, theft and s**ual harassment on public transit exponentially risen in this country. I always thought your local off duty cop or soldier/normal middle aged man or woman that want to get on the bus with the students is gonna be harmless right? Wrong.

The past few weeks, it started with theft of phones, purses, jewelry from backpacks, computers and about 2 days ago someone actually masturbated and came on an asleep girl. The other girls wouldn’t let him get out the bus and i drove them straight to the police station so that he can get arrested. The girl is okay now.

Yesterday while I was waiting for the girls to get in, 90% of them walked up to me and talked to me about how much s**ual harassment, stalking and theft they’ve dealt with this year because of the strangers that get on the bus with MY permission. They gave stories with witnesses and proof. I was horrified.

So what I did was I started asking all students for their college IDs and upright refusing letting men on the bus. It sounds cliché and kinda s**ist but I do let the male college students and your usual old grandma in. No grown a** men whatsoever because it made the daily passengers a lot more comfortable.

Apparently someone who I had to PHYSICALLY push away from getting on the bus reported me to HR for s**ism and segregation based on the s**. HR told him to f**k off basically but my colleagues are calling me a white knight and are making jokes about how Im trying to impress the girls in order to date one of them (gross) but I can’t help but feeling a lil guilty for those who cant go home because of some weirdos.”

Check out what Reddit users said about what happened.

This reader said he’s NTA and that he’s just following the rules. 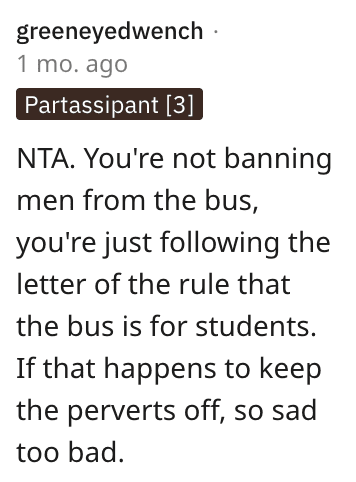 Another individual also said he’s NTA and that this guy gets to choose who he gives rides to. 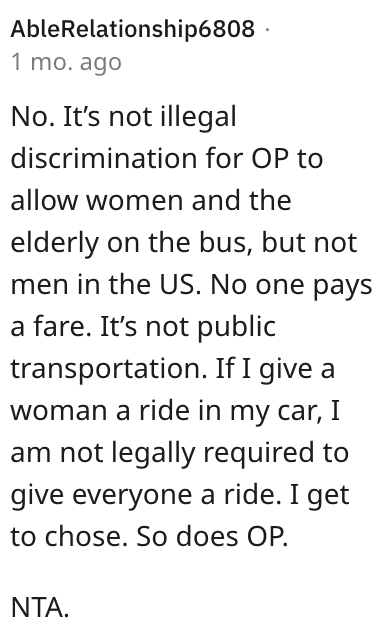 Another Reddit user also said he’s NTA and that this guy is keeping these girls safe on his bus. 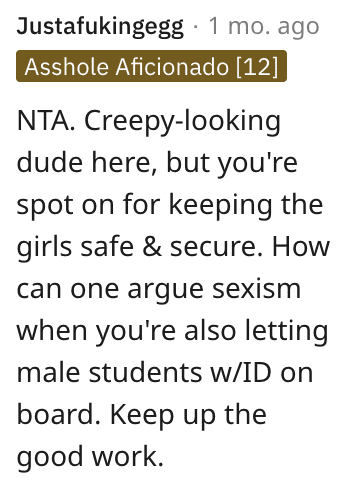