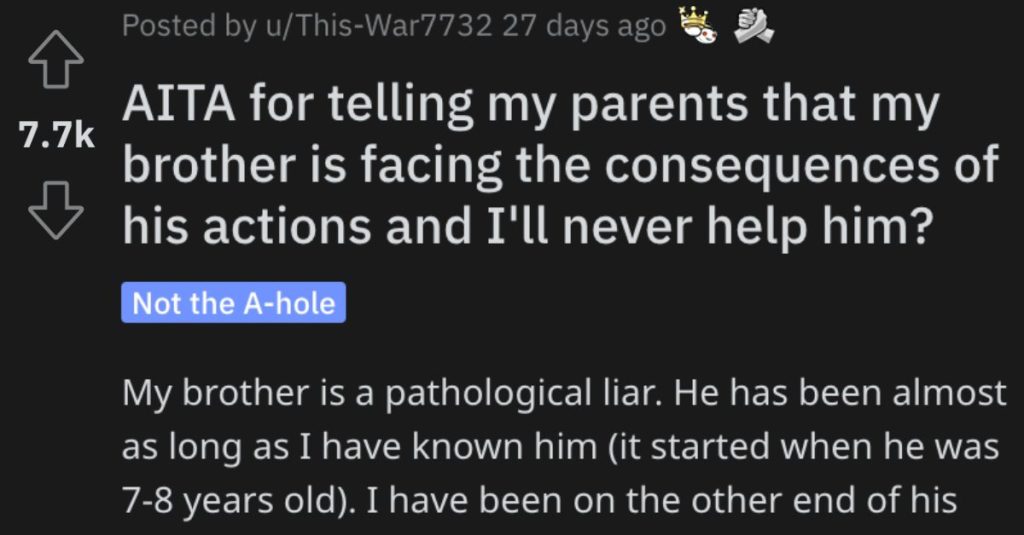 He Told His Parents He Won’t Help Out His Brother. Is He Wrong?

Is it wrong to cut off a family member and not help them out when they need it?

Well, every family dynamic is different, so you know…it’s complicated…

But is this guy wrong for telling his parents he won’t help out his brother?

Check out his story and see what you think.

AITA for telling my parents that my brother is facing the consequences of his actions and I’ll never help him?

“My brother is a pathological liar.

He has been almost as long as I have known him (it started when he was 7-8 years old). I have been on the other end of his lies more than once. I was two years older so was always supposed to forgive once I’d get an apology from him, which was always forced by our parents.

Some of the lies in childhood I was subjected to: that I cheated on one long term girlfriend and slept with her best friend, that I had stolen my best friend’s dad’s family ring (it was stolen for real but not by me), that I had given him permission to use my locker in school (which our high school did not allow), that I went out with friends when I was home, in my room.

The lie that made me cut him out of my life happened when we were 20 and 22. I had just moved in with my then long term girlfriend. She and I had been together for almost 3 years at that point.

My brother then told her that I had fathered a child with one of my ex-girlfriend’s and that I had abandoned my child so I could get girls easier. She believed him enough that even when she realized she was wrong, the relationship was broken beyond repair.

I told my brother after this that I never wanted to see him again, that he was dead to me and I hoped one day his life would fall apart because of all his sick lies. His response was we were family and I couldn’t disown him forever. I told him family are the people you love and how could I love someone like him.

It’s been 15 years since that went down. I got married to my wonderful wife, we have four amazing children together and I have not seen my brother since. I also have a strained relationship with my parents because I do blame them for not taking care of the problem a lot sooner.

So this is what I know. But I don’t really care so some details could be wrong. My brother was married. He lied a lot to his wife and her parents. His wife was sort of aware of what he was like, her parents were not.

He and his wife had children together and they lived in a house owned by the wife’s parents. His wife died suddenly and some of my brother’s lies were exposed. His wife’s parents did not want him in their house and kicked him out. They also kept all of his wife’s stuff and denied him everything but the clothes he and the kids owned and the kids toys.

They offered to raise his children but he refused. Then he lost his job because of lies. My parents took him and the kids in. Now they want us to make up and they want me to help him out.

I told him he got what he deserves and now he is facing the consequences of his actions and that I’ll never ever help him. I told them he is not my family, his kids are not my family and I am nothing to do with this. They asked how I could turn my back on innocent children.

One reader said he’s NTA and that his parents are to blame for all of this.

Another Reddit user agreed and said his brother hasn’t changed at all.

And this individual said this guy needs to stay away from all of this.