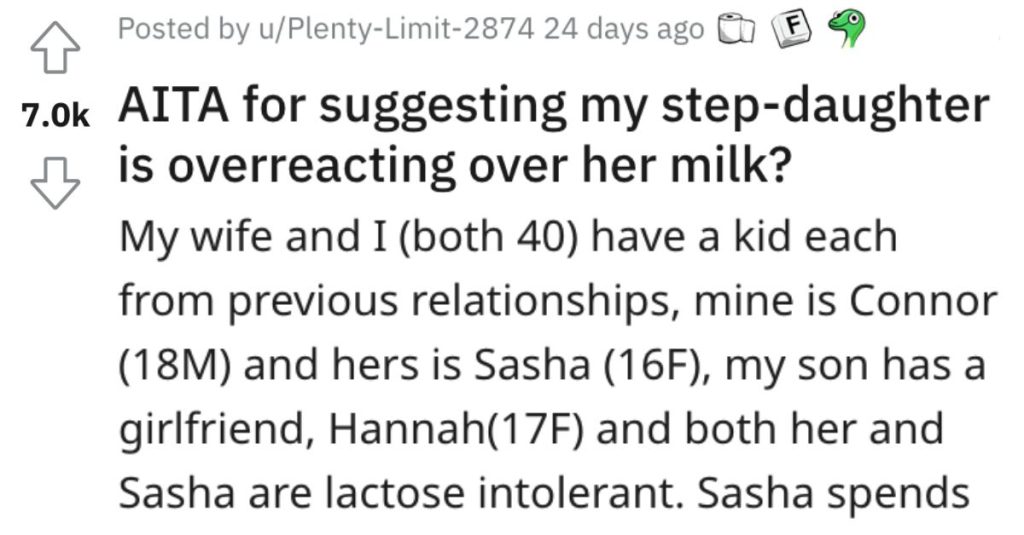 He Told His Stepdaughter She’s Overreacting About Being Lactose Intolerant. Was He Wrong?

Uh oh…it’s another one of those stories from Reddit’s “Am I the A**hole?” page where someone gets really worked up about a food allergy…or someone else’s food allergy…

But let’s get all the details before we make up our minds, okay?

AITA for suggesting my step-daughter is overreacting over her milk?

“My wife and I (both 40) have a kid each from previous relationships, mine is Connor (18M) and hers is Sasha (16F), my son has a girlfriend, Hannah(17F) and both her and Sasha are lactose intolerant.

Sasha spends half the month with us, so we always have normal and lactose-free milk, I’ll admit, Sasha’s milk is quite expensive because she only likes certain kind that she can also drinks alone and not with just coffees or smoothies.

Now the issue is, Hannah spends almost 3 to 4 days here and my wife and I don’t mind at all, but Sasha has complaint several times that Hannah drinks her milk as fuel during those days and barely leaves anything for her (we go to the supermarket every 2 weeks, Sasha can go to any nearby store and get more, tho, not the one she likes) and has asked us to either buy gallon for her only and one for Hannah or tell her to go buy her own milk.

My wife decided to just buy Sasha a small fridge to keep in her room so she can store her milk and other things there which I find very disrespectful, I mean it’s just milk, we can always buy more.

This has caused Hannah to ask if she can borrow a bit of milk every time she wants to drink a coffee with us, and Sasha says yes, most times, but when she decides Hannah has had ”enough” milk, she says she’s almost running out (which is a lie).

A few days ago, before Sasha was about to come back from her father, my wife and I bought the groceries and I put the milk on the fridge, then Sasha came and attempted to take it to her room and I said that she wasn’t allowed to do it because it was for the whole house, so she had to leave it there.

She didn’t say anything and just went to her room, and about 5 to 6 hours after that, Sasha’s dad pulled over and bought her a gallon and told us that we didn’t had to buy any more lactose-free milk for Sasha since he’ll be taking care of it from now on, but that my son’s girlfriends wasn’t allowed to have any, so we had to provide for her if we wanted to.

My wife is mad. She said we should’ve let Sasha have her own milk and bought another for when Hannah is here, even if it’s not as expensive, but I think Sasha is being a brat.

One reader said he’s an a**hole and that this situation could be fixed easily.

Another individual also said he’s an a**hole and asked why Hannah gets special treatment. 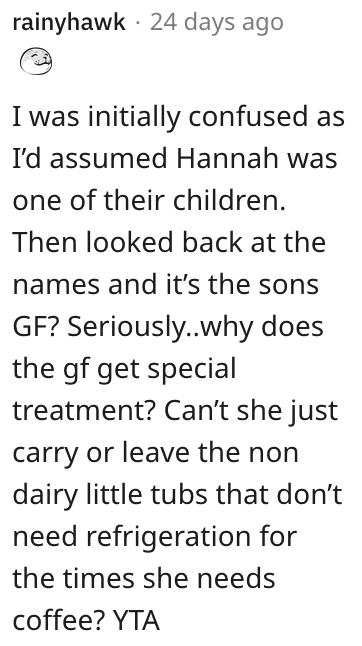 And this reader said it sounds like this guy doesn’t care about anyone but himself. 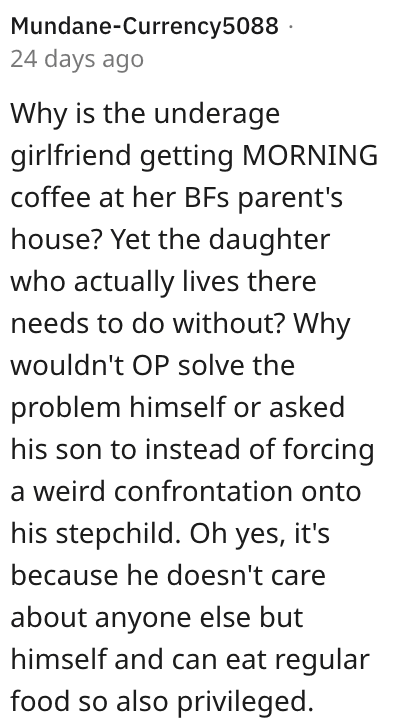