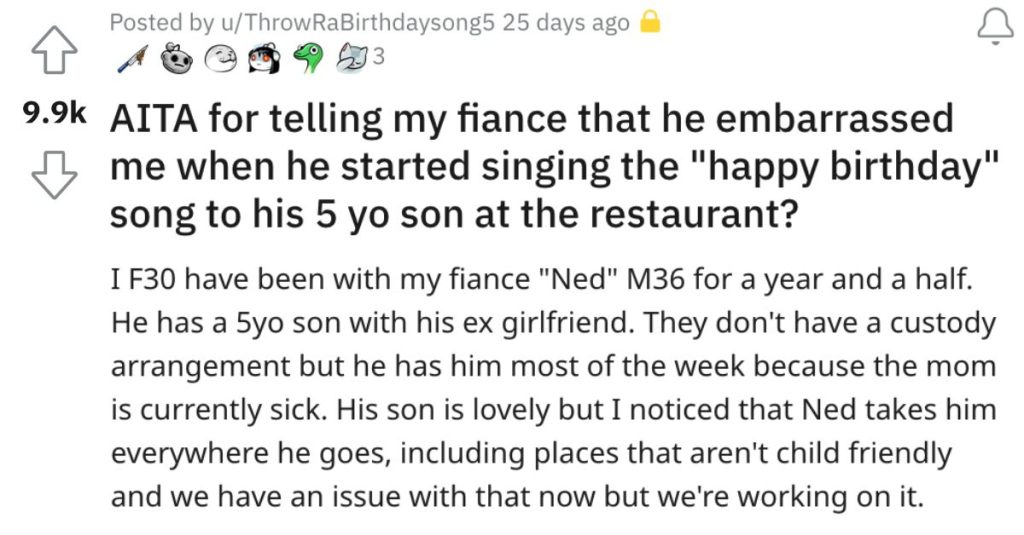 Are you one of those people who gets really embarrassed when someone sings “Happy Birthday” to you?

How about when they sing the song to someone else?

Yeah, I guess it can be pretty embarrassing either way, huh?

But it is a big enough deal that you actually call someone out for it?

Check out this story from Reddit’s “Am I the A**hole?” page and let us know what you think.

AITA for telling my fiancee that he embarrassed me when he started singing the “happy birthday” song to his 5 yo son at the restaurant?

They don’t have a custody arrangement but he has him most of the week because the mom is currently sick. His son is lovely but I noticed that Ned takes him everywhere he goes, including places that aren’t child friendly and we have an issue with that now but we’re working on it.

His son’s 5th birthday was days ago, Ned took us out to a restaurant to celebrate. The place was nice and looked a bit unfitting for the occasion because it was a somewhat expensive place.

Anyways, We ordered food then got the birthday cake which was a surprise to me because I thought we were going to celebrate at home…so we could be free to sing and play however we wanted. I still had no issue with that til Ned started singing the “happy birthday song” to his son. I was stunned I almost drop my plate.

He was singing it at the top of his lungs not even looking around or paying attention to how many people staring at us awkwardly. I felt so embarrassed I kept whispering for him to stop but he ignored me. Of course my future stepson was hyped and a little too active which isn’t good when we’re at a public place.

I expected the staff, the manager, anyone to get involved and stop him but no one did. In fact some woman came up to us and offered that she “help him take a video recording”. I wasn’t in it at all. I froze in my seat looking stunned and a little angry.

He looked at me later asking what was wrong. I didn’t say anything except “thanks for finally noticing!” he didn’t understand what I meant and I didn’t explain til we were in the car. I flatout told him that he embarrassed me the second he started singing in the restaurant.

He looked shocked saying he didn’t get why I would be embarrassed by him celebrating his son’s birthday and cheering him up. I told him we could’ve done this at home when we’d be more comfortable and free. He took it as in I was ashamed of him and his son but I denied it and said that it just felt awkward and embarrassing to maybe because I’ve never been in this situation and also judging from the restaurant we were at.

He said that his son’s mom is sick and he’s trying to do all he can to cheer him up and that all families do that and no one had an issue with that except me then when I tried to explain, he got mad and said he no longer felt like talking.

We haven’t been speaking since then. It appears he’s still salty about me saying what I said and insisting that I see him and his son as an embarrassment.

AITA? I think he’s being too harsh with the whole ignoring me thing instead of talking it out.”

One person said she’s an a**hole and that it doesn’t seem like she’s a good match for people who have kids. 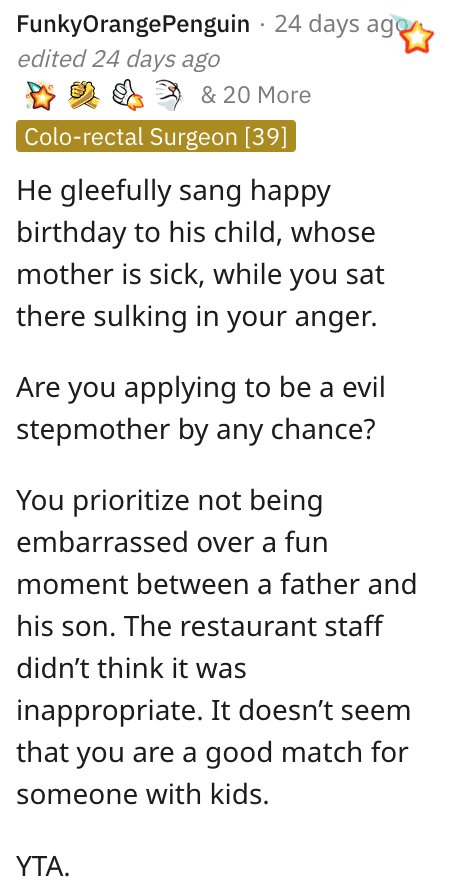 And this reader said they hope this guy leaves her for his kids’ sake. 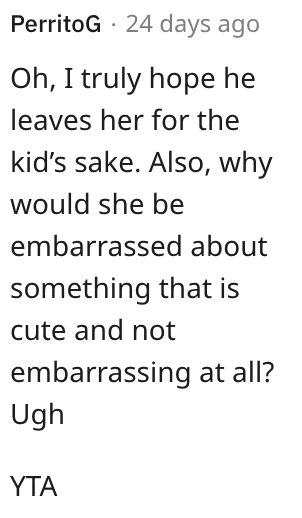