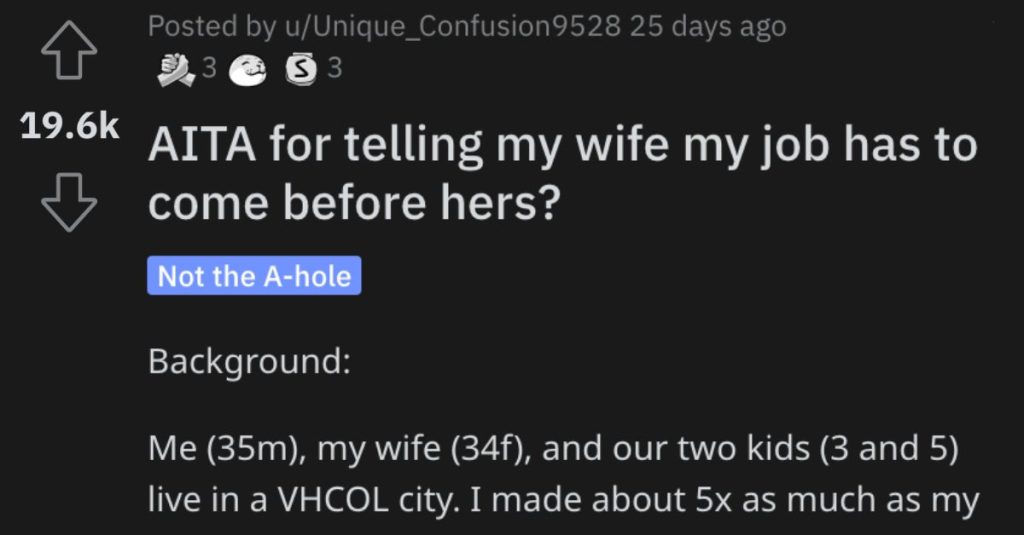 He Told His Wife His Job Has to Come Before Hers. Is He Wrong?

Some people don’t like to admit it, but usually, one person in a relationship makes more than the other and that means their job is more important…at least in monetary and lifestyle terms.

So is it wrong for a person to say their job has to come before their spouse’s?

Read on to see what happened in this story from Reddit’s “Am I the A**hole?” page.

AITA for telling my wife my job has to come before hers?

My job is pretty low stress, about 35ish hours a week with the only requirement that I be “on call” for 1 week out each month. Normally nothing ever happens, so I do my usual routine with the understanding with my wife that if I am needed I will drop whatever we are doing and work until the work issue is resolved. This only ever happens once every quarter and only lasts a few hours.

My wife on the other hand has a much more stressful job, her boss is incredibly demanding, and often demands random and inane things just as a power play with her subordinates. She usually works about 45-50 hours a week. As a result, I take care of most home stuff, drop off / pick up kids from daycare, cook meals, and generally keep the house clean.

It was an on-call week after work hours when my wife got a text from her boss about fulfilling an emergency ‘request’ for a client. My wife complained to me that this request really could wait until tomorrow but she would rather get it done so she doesn’t have to listen to her boss b**ch at her in the morning if its not done.

I had no problem with it, but I reminded her that I am on-call so I might need to switch with her if something came up, she made a grunt of acknowledgement but nothing beyond that.

About 2 hours later I get an all-hands call to immediately come into the office. Normally I can resolve issues remotely, but we had an issue that prevented us from remoting in. I rush upstairs and told me wife I had to leave only for her to turn around and say, “Sorry but my issue came up first, you are going to have to tell your work you can’t.”

I was taken aback and told her that no, this issue isn’t something I can skip for anything short of ‘I am physically in the hospital and can’t come in’. She got increasingly angry and started ranting at me, but I told her that I didn’t have time for this, and that I am leaving, when I get back we can discuss this.

She started crying, but I had no more time, so I left for the office. On the way she called me to continue the argument and in the heat of the moment, I said, “Look, I respect that you put a lot of time and energy into your work, but we cannot afford our house or lifestyle without my job, so when push comes to shove, my job has to come first otherwise we are going to be on the streets.” She hung up on my after that.

When I got home about 3 hours later (around 11 pm) the kids were crashed out on the living room couch with several bowls of cereal spilled around them. I went upstairs and my wife was locked in the bedroom and refused to talk.

In the morning I found out from the kids that she spent the night crying in her room and didn’t feed them dinner or tuck them in so they made cereal and had a sleepover in the living room.”

Now take a look at what Reddit users had to say.

This reader said they would be LIVID if they came home to something like this. 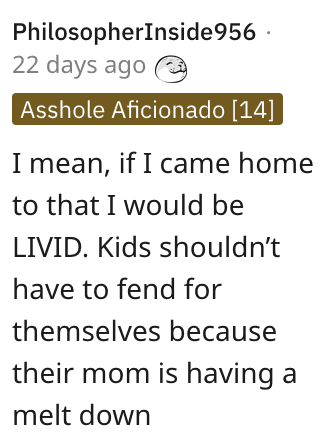 And this Reddit user agreed and said this was very irresponsible of the mother. 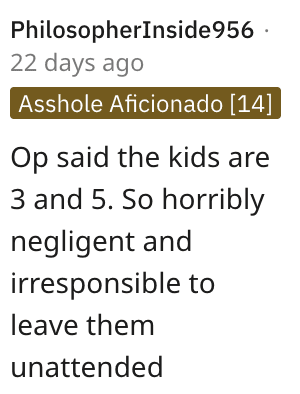 Another individual said this guy is NTA and put things into perspective. 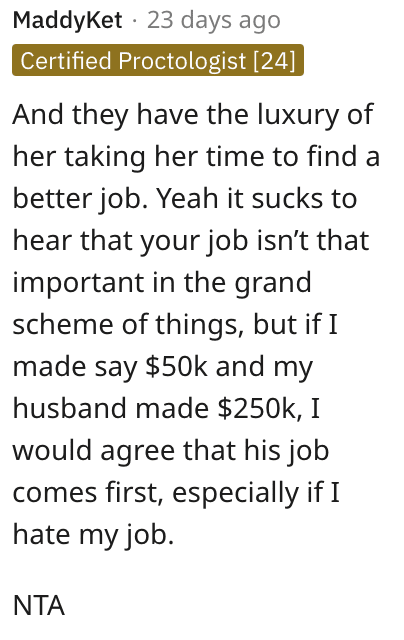