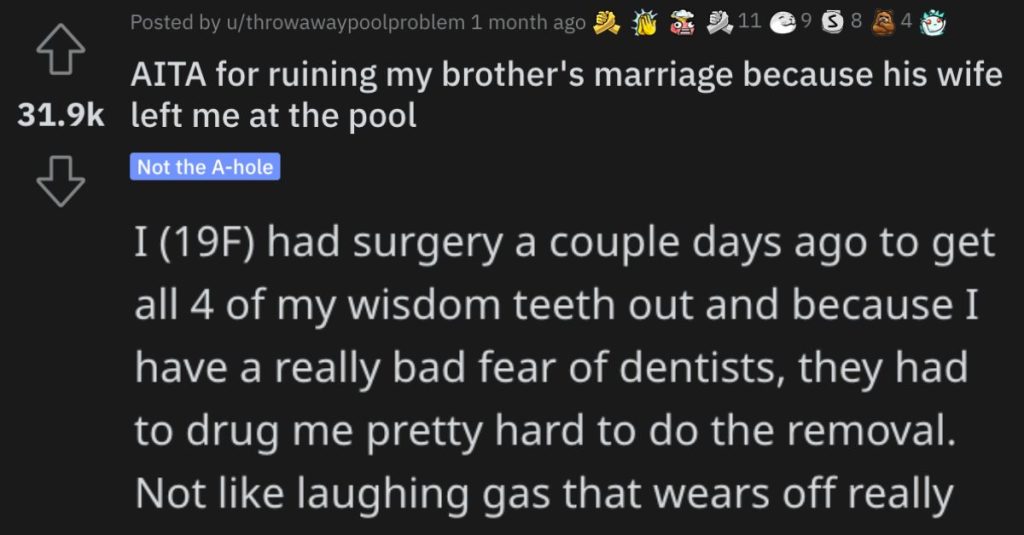 She Says She Ruined Her Brother’s Marriage. Was She Wrong?

No one likes to be accused of breaking up a marriage…especially if it’s not their own!

And in this story from Reddit’s “Am I the A**hole?” page, this young woman wants to know if she’s at fault for what she’s being accused of.

Let’s take a look at what went down.

AITA for ruining my brother’s marriage because his wife left me at the pool?

“This whole situation is so bizarre that I still can’t really process it. It still doesn’t feel real but I feel scared and guilty

I (19F) had surgery a couple days ago to get all 4 of my wisdom teeth out and because I have a really bad fear of dentists, they had to drug me pretty hard to do the removal. Not like laughing gas that wears off really fast, but actual IV medicine so I was pretty much unconscious during the whole thing.

They told me to have a “responsible adult” drive me to the appointment and back because the meds they gave me would make it dangerous to drive. My mom was on a work trip and couldn’t take me, so I asked my sister in law Bri (24, not her real name) if she could do it as the whole thing would only take an hour or two.

I even offered gas money because the dental office is about 45 minutes away. I would have asked my brother but he works during the day while bri is a stay at home mom to their 2yo daughter who I think was at bri’s mom’s house that day.

Bri agreed to take me to my appointment and the surgery went fine, bri waited in the lobby for me to be done. When I came out of anesthesia I was very disoriented and nauseous, which I guess is normal. I had gauze shoved in my mouth to stop any bleeding and bri took me to her car after I was let go.

I don’t really remember much of the drive but it felt like not enough time passed before bri got out of the car and told me to come with her. I was really out of it and just followed her because the alternative was staying in the hot car.

long story short, we were at a pool?? I was really confused but once we were through the gate bri basically parked me at one of those little table-benches said she’d be back in a while. I was still trying not to puke and was really dizzy from the heat (90+ degrees) and the drugs, so I asked her to take me home but she wouldn’t.

I guess since it was her day off and she didn’t have my niece she was meeting friends at the pool. I was starting to feel really sick and on the verge of passing out or having a panic attack, so I called my brother.

I don’t think he could understand me between the meds and the stuff in my mouth because he hung up and I guess called bri because she came stomping back over, cussing and yelling at me, and took me back to the car. I passed out on the drive home, but when we arrived my brother had left work and met us in the driveway.

He was screaming at bri and she was crying. I was still pretty disoriented but my brother took me back home and stayed with me until the meds wore off. That’s when he told me he’s divorcing bri because of what she did plus some other things he didn’t go into detail about.

It’s been a few days since then and bri has been blowing up my phone telling me what a b**ch I am and how me tattling destroyed her family. Part of me feels bad because of my niece and I wonder if I should’ve jjst dealt with it and waited for her to be done at the pool instead of calling my bro and causing problems.

One reader said that this woman is NTA and that they think this would definitely be a reason for a divorce. 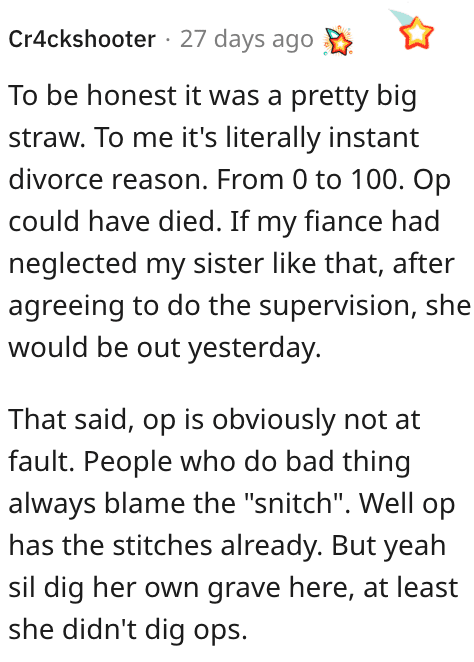 And this person agreed and said this could have ended very badly. 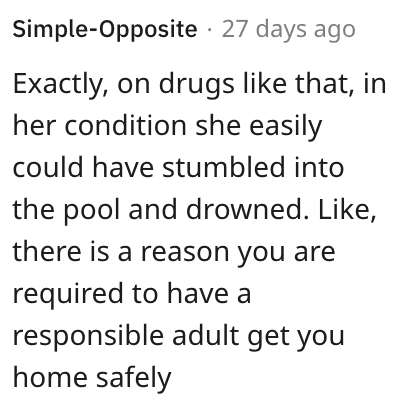 Another individual said she’s NTA and that Bri is the one at fault here. 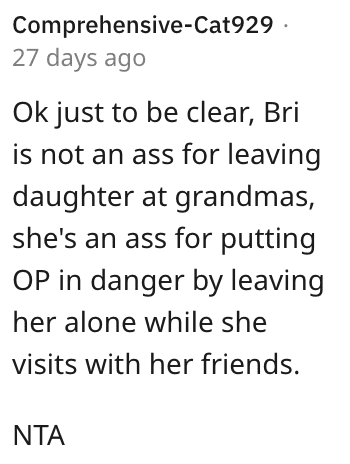