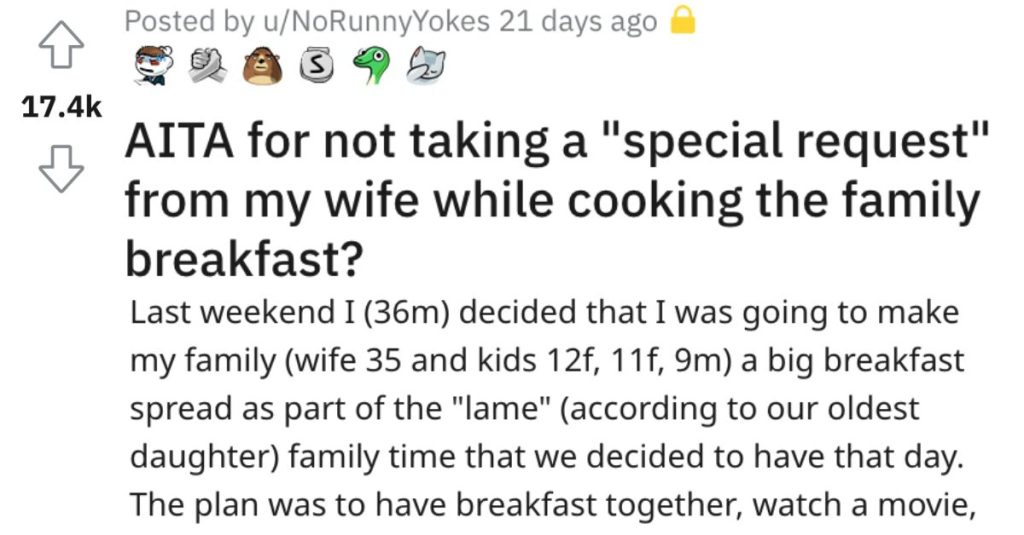 He Wouldn’t Take a Special Request From His Wife While Cooking Family Breakfast. Was He Wrong?

Honey, you forgot the Hollandaise sauce…

Do you ever lob special requests at your partner when they’re making you breakfast?

Do you ever turn them down?

But this guy did and now he wants to know if he’s a jerk.

AITA for not taking a “special request” from my wife while cooking the family breakfast?

“Last weekend I (36m) decided that I was going to make my family (wife 35 and kids 12f, 11f, 9m) a big breakfast spread as part of the “lame” (according to our oldest daughter) family time that we decided to have that day.

The plan was to have breakfast together, watch a movie, have lunch, and play some games as a family before we released the kids from the clutches of the, again, “lame” family time.

So anyway I got up early, heated up the waffle iron and the huge stovetop skillet, and went to work making waffles, scrambled eggs, bacon, sausage, and hashbrowns. As I was finishing and the kids had plated up my wife asked me to throw a couple of eggs overeasy on for her.

She’s the only one in our family who can stand runny yolks; neither I nor the kids will touch them, but she she really likes them. I just told her “Nah; I’m finishing up already. If you really want a couple of eggs your way and want to make them yourself go for it but I’m done.”

She responded “You’re already cooking. I’m in the mood for a couple of overeasy eggs. Why can’t you just throw them on for me?” I refused and it turned into way more a quiet, bickering argument than it should have.

It’s been on my mind since and on the one hand I feel bad my wife just asked me for a small favor that wouldn’t have been a big deal at all to fulfill. But on the other hand I had made plenty of food already. My wife likes scrambled eggs too just fine and there was plenty of food for her to eat. Why did she need to go insisting on her special request?

It was honestly a silly, petty fight but nonetheless I’m curious who people think was in the right.”

One reader said he knows his wife likes her eggs a certain way but he chooses not to…and they said they feel for his wife.

Another Reddit user said he’s an a**hole and that she does this for her husband all the time.

And this individual made a good point. Check out the question they asked this guy. 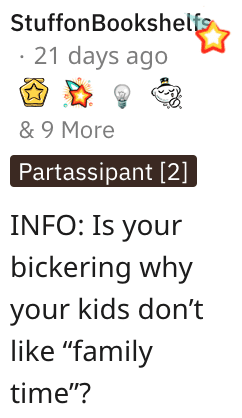