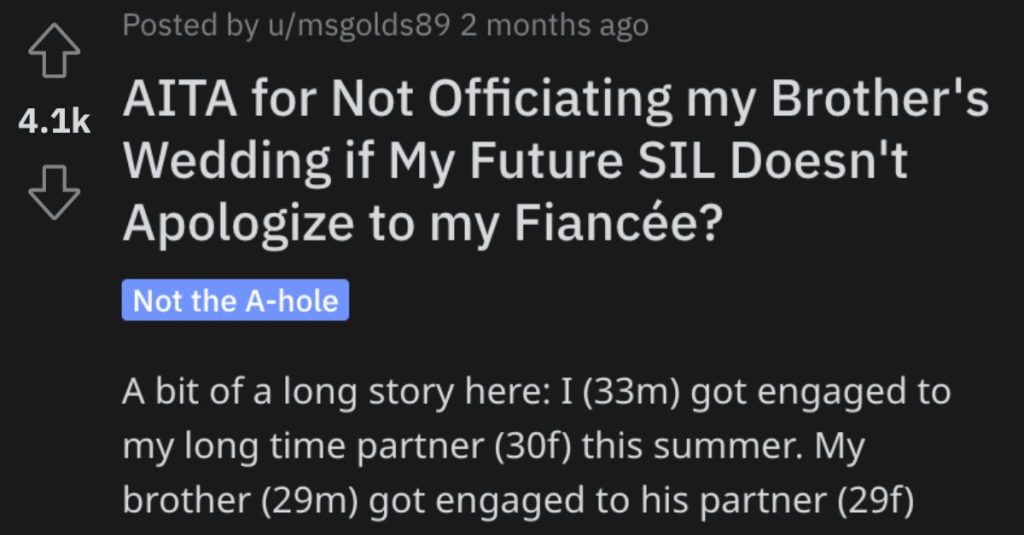 Is This Guy a Jerk for Not Officiating His Brother’s Wedding? People Responded.

Hmmmm, this sounds like a pretty complicated family situation, I’m not gonna lie…

And I’m glad I’m not in the middle of it!

But these folks are, so let’s see what the heck is going on here.

Check out this story from Reddit’s “Am I the A**hole?” page.

AITA for Not Officiating my Brother’s Wedding if My Future SIL Doesn’t Apologize to my Fiancée?

We have never been fans of my brother’s choice in partner. She is very self-absorbed and emotionally manipulative, and has driven wedges between my brother and multiple family members. The family generally sees her as a bit of a gold digger… she even planned her own Disney proposal and guilted my brother into dropping 13k on a ring for her. She also tried to get my brother to cut ties with our youngest brother at one point, as she and him never saw eye to eye.

She doesn’t have a great relationship with her own mom and has generally latched on to our mom as her de factor mother figure. She will constantly call and text her throughout the day. She also has a habit of inviting herself along when my mom is going out to dinner with other people/relatives. It annoys my mom to no end but she’s too polite to say anything about it. She even went wedding dress shopping with her a few weeks ago. Anytime somebody says something to my brother he gets very defensive and says not to involve him.

With that said, after they got engaged we tried to make nice. I had even agreed to officiate their wedding, as I have done that for friends in the past.

My fiancée went shopping for her wedding dress this weekend. She invited my mom, and her own mom and stepmom flew in from out of town. While they were getting brunch beforehand, my brother’s fiancée kept calling and texting my mom asking to be invited out.

My mom told her to ask my fiancée (something she never did). My fiancée only wanted the moms and didn’t even invite her bridesmaids. After she get persisting I texted my brother and asked him to tell her to stop, which she did.

I thought that was the end of it, but apparently my future SIL threw a giant tantrum afterwards. My mom tried to call my brother, and she picked up his phone to tell my mom she isn’t speaking to her.

My point of view is that she owes both my fiancée and my mother apologies. She tried to invite herself to an event that had nothing to do with her but which was a very important life event for my fiancée.

She then proceeded to make it about herself when she set some very reasonable boundaries. She never once asked my fiancée’s permission. With that said, her narrative of events is that we meanly went out of our way to tell her she wasn’t welcome.

AITA for refusing to officiate or even attending my brother’s wedding if they don’t have the courtesy to even apologize to my fiancée?”

Check out what AskReddit users said about what happened.

This person said he’s NTA and that the future sister-in-law is full of red flags and she’s co-dependent.

And this Reddit user said that his brother probably already knows how terrible his fiancée is but he doesn’t have the guts to get rid of her. 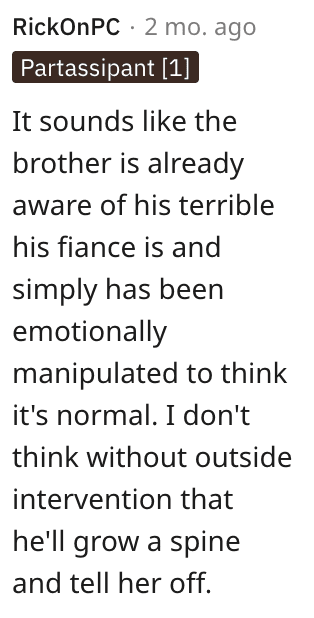 Another person said her behavior is a**sive and his brother needs to call this wedding off.