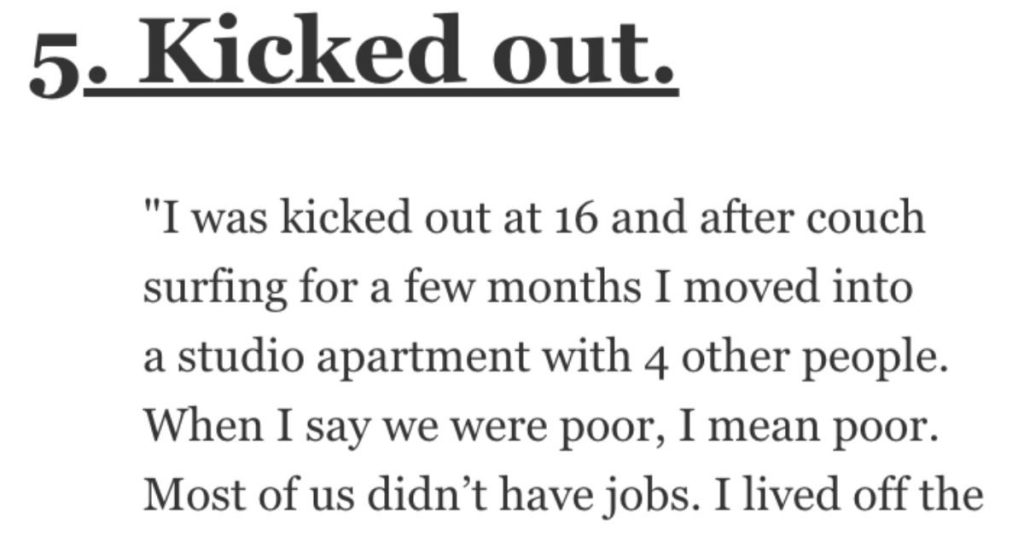 How Did You Move Out of Your Parents’ House Before You Turned 30? People Shared Their Stories.

There’s no doubt about it, things are tough out there right now.

And more and more people are living with their parents longer than they normally would OR they’re moving back in with them.

So let’s hear from folks on AskReddit about how they managed to move out of their parents’ house before they turned 30.

We used to get 1 free meal a day so I would split it out and have a sandwich for breakfast and fries for lunch, then all I had to buy was dinner. Veggies from the farmers market are cheap.

My roommate worked at the movie theater and would bring home garbage bags of leftover popcorn and we ate that stuff until out mouths burned from the salt. I miss having the metabolism of a teenager!”

“I left for college at 17 with a massive scholarship and worked my a** off throughout and after college to avoid returning to my hometown and memories of abuse there.

It seems like a lot of people here moved out in a sink or swim scenario. If you’re able to take your time, it may be a luxury.”

“Hold on while I reminisce about $500 one bedroom apartments, $1.50 gas and being on my moms health insurance…”

4. Live within your means.

“This was early 2010s. Job. Accepted that the life I WANTED to have vs. what I could afford were two very different things.

Example: Knowing that 2.5k downtown loft apartment was probably not the best decision when I could find a run down, but entirely livable 1br for 900.

Going out each weekend is fun, but 99 cent rental from Redbox was fun enough and cheap. Lots of living within my means.”

“I was kicked out at 16 and after couch surfing for a few months I moved into a studio apartment with 4 other people.

When I say we were poor, I mean poor. Most of us didn’t have jobs. I lived off the worst of the worst food. Knockoff ramen. Dollar store canned veg. Rice and terrible year old pasta.

It was a wild few years.”

“I graduated in 2008, in the midst of a global recession, and still managed to move out from my parents’ house by 2009.

A LOT of work and overtime and a LOT of cutting spending wherever I could, and two roommates to split an actually pretty nice 3br house just outside the city so we didn’t have to live in a shithole shoebox.

Commuting sucks but you get used to it. Not being able to spend the money you have on “fun” s**t sucks too, but when you put it in perspective for the rest of your life it’s definitely pretty worth it and all my savings and budgeting allowed me to buy one of my dream cars in my early 20s.

If you prioritize the things you really want long term instead of immediate satisfaction every time you get a paycheck, it just works out way better in the long run.

That said, I have NO IDEA how anyone who is graduating or entering the workforce right now can even manage. Even basic things like pasta or ramen noodles are rapidly becoming not cheap.

I’m doing okay for myself and even I get fucking demoralized going to the grocery store these days, and count myself lucky that my rent hasn’t really gone up yet. Really gotta suck for young people these days, I can’t even imagine.”

“I moved out at 23 to a pretty rundown building with my girlfriend at the time (now wife). We had a dog and a cat but didn’t spend much money otherwise.

Saved up for a few years and bought a starter home (small town house). After 10 years in the townhome we moved to a bigger house with the space we wanted and live pretty much the life I’ve always wanted.

It’s very nice nice but it takes time. It’s also very dependent on your career progression. Hopefully you’ll be making more in 5 years than you are now and if you buy a place your mortgage isn’t really increasing like your rent would be so you maintain the living expense but your income goes up and you get way more breathing room.”

graduated at 24, got job, continued to live independently.”

“My roommate owns his house, but it was his grandfather’s and he grew up here.

Neither one of us is an adult, we just have low standards.

I eat Walmart canned vegetables for lunch and don’t go anywhere or do anything, just work and tread water and watch pirated anime.”

“Moved out right after high school.

99% scholarships and grants. Got me through 5 years of engineering school.

Then continued busting my ass to this day. 33 now.”

Came back for the summer in 2007, but thereafter I got an internship so I just stayed in the city. Got a job at the same place after I graduated.

It was never some big moment for me (my parents are fine, just annoying), just a natural progression for me.”

How did you pull this off?