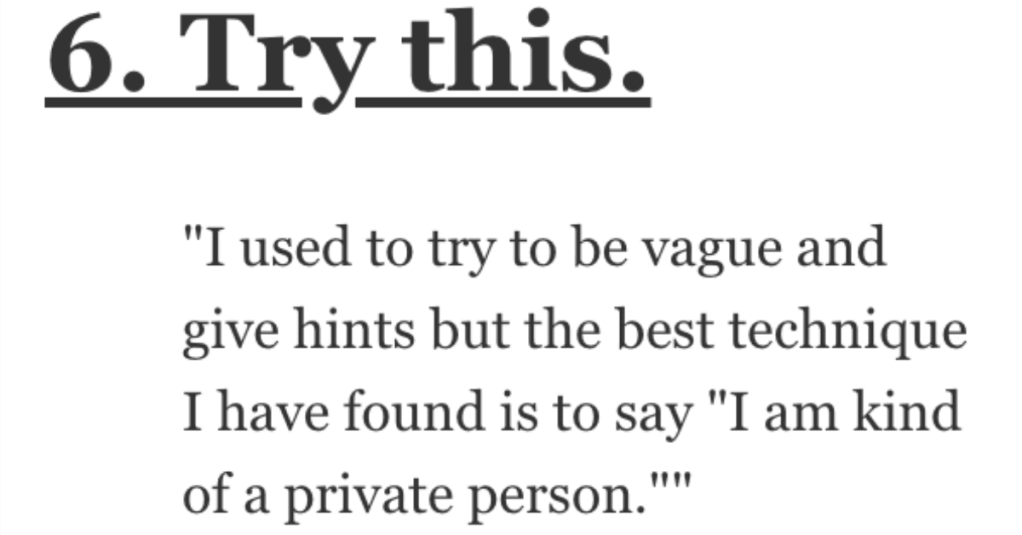 How Do You Deal With Annoying Neighbors Who Won’t Leave You Alone? People Shared Their Thoughts.

I used to have a neighbor who was impossible to escape from.

He was a really nice guy, but every time I happened to run into him outside, there would be at least a 15-minute, one-sided conversation while I slowly backed away.

I’m kind of glad I don’t live next door to him anymore!

Because those 15-minutes increments start to add up…

Folks took to AskReddit to share how they deal with their overly friendly neighbors.

“If you’re not very open to chat, just keep things polite yet quick. It’s nice to have a good relationship with your neighbors.

If they do delve into personal questions, just say “that’s a bit personal, I’d rather not talk about that.” Most important thing is to be polite.

Don’t be an a**hole, or act standoffish when it’s not necessary.”

“Try having a neighbor who tracks when you leave and arrive back home. Talks to your boss about your work schedule and when you’re actually supposed to be at home.

Asking my boss if I had Covid when she noticed I hadn’t left the house in a couple days. The list goes on and on. I f**king h**e nosy neighbors, is your life really that miserable you have to worry about STRANGERS?!

I told her off and we are currently looking to move. Some people are just bad neighbors.”

“I ‘made friends’ with my neighbor at the beginning if lockdown.

Now whenever I go out front of my house, he comes out. Every single time. Even when we just open our front door, he comes out and just sits.

One time, amazon dropped a package off when I was working on the side of the house. He opened his window, proceeded to YELL to me that amazon had delivered a package.

I don’t go out of the front door anymore, unless going to my car. I just hang out around back and even take my dogs on walks leaving through and arriving through the back yard.”

“My partner and I just moved in to a house and got cornered by a neighbor for 30 minutes. My Midwest sense of guilt needs to clarify a few things.

We were on our way to do stuff, this neighbor started talking and didn’t stop for 30 minutes. I’m not exaggerating. Half an hour. Non stop talking AT us, not with us. We tried every little polite out we could take.

Plenty of “welllp”s and “D**n, that’s crazy”s and even a few god d**n “well we should really get going”s. I even started leading the conversation into the middle of the street hoping a passing car would separate us. None if it worked. We only finally made it out of there because it got dark.

I’ve decided the next time this happens I’m just going to tell her politely, but firmly, that I need to take a dump and then just walk away.”

“I live in an extremely religious community ( Mormons) so this happens all the time. I used to try to be vague and give hints but the best technique I have found is this one.

“I am kind of a private person.”

And then I compliment them on something I have noticed. “Nice grass” or “Hey thanks for checking on me, I know it comes from a good place.””

“Be as polite as possible.

Seriously, its better than having a bad one who you are constantly at odds with.”

“I am generally a magnet for weirdos, so I have oodles of experience with this. The simplest way to deal with the nosey person is turn a lot of the questions back at them.

“Oh, thanks for asking, but I really need to know where you bought that fern. It’s so neat looking”.

“Oh, my job is boring. Tell me what you do for a living”.

Most of these busy bodies are looking for info to tell others. They’re so bored in their lives they have to know everyone else’s business. Either turn the question back at them or practice giving vague answers that say nothing.

If you can’t or don’t want to talk to them, make sure you have very visible headphones on (even if your not actually listening to anything). Don’t remove them when they speak to you. Either just lift one each time they speak or leave them on and yell really uncomfortably loud when responding.

Occasionally misunderstand what they said because you couldn’t hear them. If they push it, say you’re listening to classes to learn a foreign language for work. The boss put you on a deadline to learn it. (Pick an obscure language)

If all that doesn’t work (those extra special nosey people), start feeding them really strange information that they’ll sound weird repeating to the neighbors.

Of course, the best remedy is to just talk to them for a minute, then excuse yourself and tell them you really have to get back to whatever you’re doing. Then step away. But it’s sometimes fun to mess with the annoying ones.”

“I don’t mind overly friendly neighbors as much. Giving a short vague answer to certain questions you’re not comfortable with is probably best.

The problem I have currently with a [new] neighbor is that they are not respectful of others space or property. They have over 7 adults and 5 minors living in the house. Cars parked in front of my home, rv’s, old scrap car in their driveway (city violation).

They let their kids run all around my driveway, play with my doorbell, throw rotten fruit in my backyard. One of the adult men likes to leave his trash in front of my driveway, constantly yells at night. Power washes all of his cars and rv’s close to my driveway (all day). Several neighbors I have spoken to have had nothing but negative things to say about them, but no one does anything about it.

I try to actively ignore people like this, as they are renting the home and I have no idea how long for. But my patience is running thin.”

“Honestly I have very poor social awareness and no filter at all so they would probably hear about how my chronic illnesses have resulted in constipation so bad that I have to be on laxatives for 6 months to restart my bowels and the consequences that all of this has on my s** life.

I fully accept that I am the reason that I have very few friends.”

“I’ve learned this lesson a very hard way I’ve know my neighbor (56m) for around 15 years and considered him a family friend. He watched me grow up and our families have even takin a vacation together.

He was always nosey and asked personal questions but I shrugged it off as that’s just how he is. That was until my girlfriend (20f) moved in with us. He slowly became more and more friendly with her. Asking her where she works. About her family. And slowly changing his personality to hers. I suspected something was going on. Keep in mind he is married with a daughter still in high school.

One day I came home from work and my girlfriend was sharing a beer and talk with him in his garage nothing out of the normal he frequently invited us over for beers and what not so I thought nothing of it. A few days later my girlfriend comes to me in tears. And not of sadness but of frightened tears. After what seemed like forever she told me. That the night she had a beer with him he told her horrible things. That he wanted to f**k her brains out and steal her and tie her up.

He’s thought about breaking into our home and taking advantage of her. He as well broke into her car and was leaving her love notes. My once friendly neighbor went crazy. I confronted him about the situation and he admitted to it and told me I was no good and did not deserve her. And keep in mind he told me this in his backyard with his wife and daughter home. Fast forward a month later. (In this time he hasn’t showed his face since).

My girlfriend gets off work early and as she is walking into our house he was hiding in the bushes asking if she was afraid of him. She ran inside and we had to call the police. And for the next Two months he sat on his property line next to ours with a small foldable chair and just watched our house.

So the best way to deal with a overly nosey neighbor is to cut the convo short and walk away.”

How do you deal with annoying neighbors?