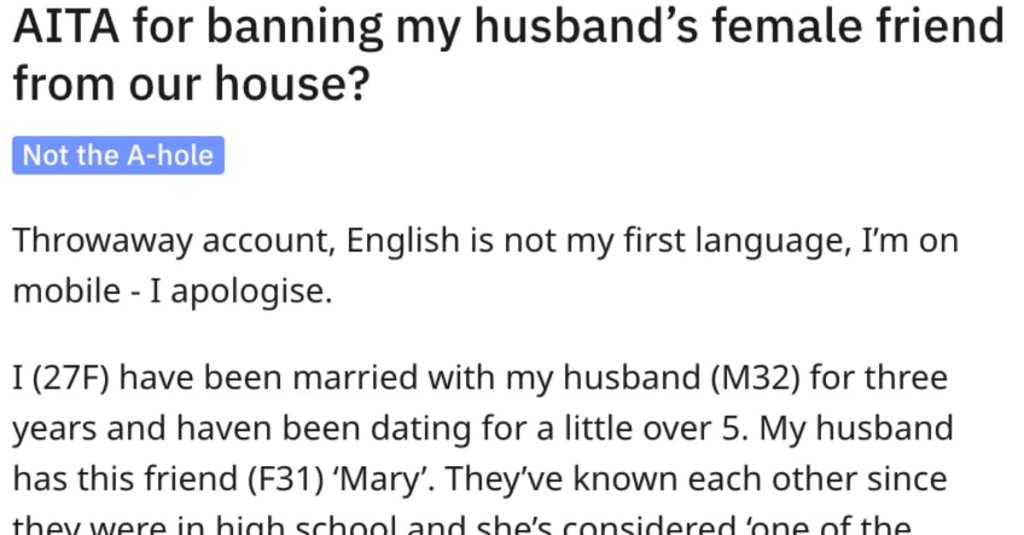 I Banned My Husband’s Female Friend From Our House. Am I a Jerk?

Hell hath no fury like a woman scorned…or a woman who is really annoyed by a husband’s female friend.

Well, we’re about to dig into a story about this phenomenon that I think all of you will find very interesting.

This woman took to Reddit’s “Am I The *sshole” page to ask for advice from the readers there about a sticky situation with her husband and one of his female friends.

AITA for banning my husband’s female friend from our house?

They’ve known each other since they were in high school and she’s considered ‘one of the boys’, if you may. That basically means she’s always invited to all the fishing trips and stuff, which I don’t mind at all, I trust my husband.

Well, my problems with Mary started when she first found out I’m half Romanian. It started kinda innocently, with her asking me to say certain words, teach her some insults etc which didn’t necessarily bother me, but it usually put me on the spot whenever we were out with my husband’s group of friends.

It only escalated to her googling stuff about Romania and asking me ‘are you a vampire? do you bite your husband by the neck?’ to ‘are you a gypsy? I bet you’ve got some of that gypsy blood in you’ (which is just blatantly racist)

Last week, me and my husband organized a mini BBQ with our friends and Mary was invited by my husband despite me telling him she makes me uncomfortable. He said he had talked to her about her remarks and she’s been understanding so it’s unlikely she’ll say something this time.

It was midnight and there were about 4 of us left and I accidentally spilled some red wine on Mary’s jeans when I tripped over a carpet. All hell broke loose. Mary started saying that I’m a witch and I’m trying to ruin her life and this whole thing is part of my ritual and I’m just a ‘immigrant gypsy trying to ruin my husband’s life’ and I’ve poisoned my husband against her.

I started crying and profusely apologizing. When she wouldn’t drop it, I kicked her out and banned her from ever coming to my house again.

AITA for doing this? My husband insists that Mary was just drunk and talking nonsense and he would talk to her. He also told me I’m way too sensitive about my heritage and I’m an a-hole for banning her. Mary has since given me a half hearted apology but I’m still not ok with her.

So, was this woman wrong, or is it all Mary’s fault?

Here’s what people had to say.

This person was very clear with their opinion: Mary was very disrespectful. And the woman’s husband needs to get his act together.

This Reddit user also thought that the woman’s husband needs a huge check about his priorities.

This individual brought up a painful memory about something that an ex did to them that reminded her of the situation the writer is going through.

Another user argued that Mary is being racist and that the writer’s husband should make her the priority.

And finally, this reader laid it all out there: this woman’s problem is her husband, not Mary. 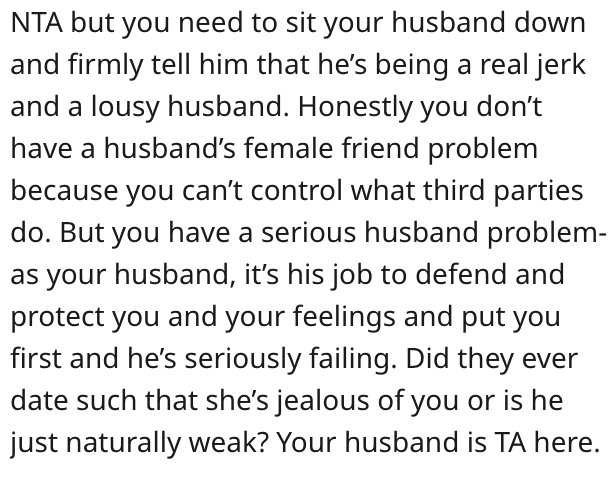 Do you think what this woman did was okay?

Or did she overreact in a major way?

Talk to us in the comments and let us know your thoughts. Thanks!