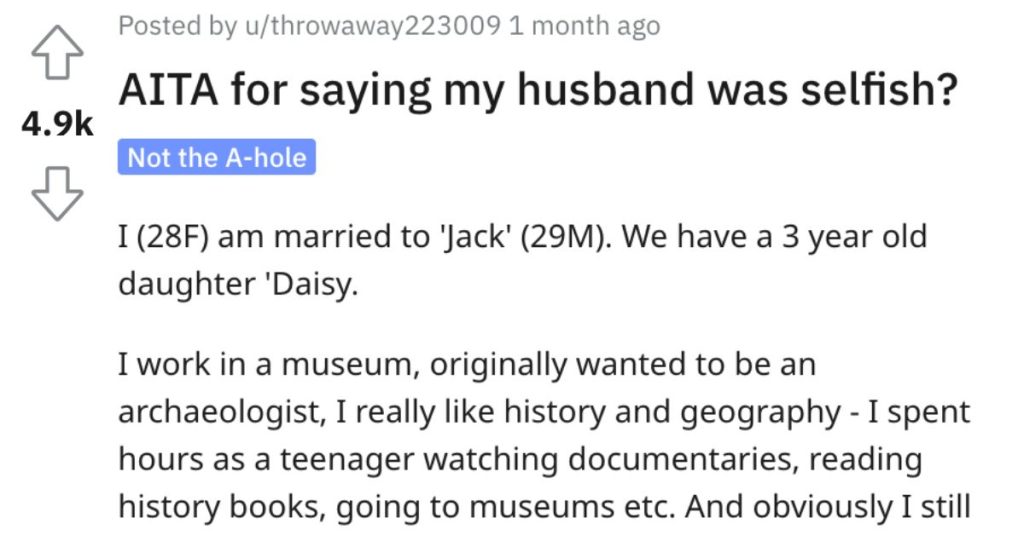 Is She Wrong for Calling Her Husband Selfish? People Responded.

Those are fightin’ words!

If you tell someone they’re selfish, you can just go ahead and assume that things are gonna get ugly…especially if that person is your spouse.

Check out this story and see if you think this woman was out of line for what she said.

AITA for saying my husband was selfish?

I work in a museum, originally wanted to be an archaeologist, I really like history and geography – I spent hours as a teenager watching documentaries, reading history books, going to museums etc. And obviously I still do, because of my job. Whenever we get the opportunity so go on tours or trips, I get super excited to hear the history of different buildings.

Recently we booked a tour guide boat, which I was really looking forward to. It was the three of us that went, and for the first half I was really enjoying myself, but it was also super hot, and Daisy ended up wanting to go downstairs where there is AC. I asked Jack to take her, since he isn’t as interested in history, and he wasn’t that excited for the trip.

I wanted to stay upstairs because that was where the tour guide was, and where you get the best views. Jack refused to go downstairs, saying that he was taking pictures and I should just go. I told him that he wasn’t even listening, and I could take pictures for him, but he told me to “get over myself and take our daughter downstairs”

I went down, but honestly didn’t enjoy myself at all, the only view was the water, and you could barely hear the guide at all. It really ruined my mood because of how excited I previously was, and when we got off the boat I told Jack that I thought he was selfish, since this wasn’t something he was even interested in.

He got really upset, saying that I was being childish and should get over it since its just a boat and our daughter came first – and that I had probably heard all of the tour stuff before anyway (which, no, I hadn’t, I knew about some of it but that’s all)

We’ve been tense since, I’ve tried to get over it, but I feel like he really disregarded my feelings, and he’s still saying that I’m being childish for being annoyed. I don’t know, AITA for calling him selfish?”

One reader said she’s NTA and that facts are facts. 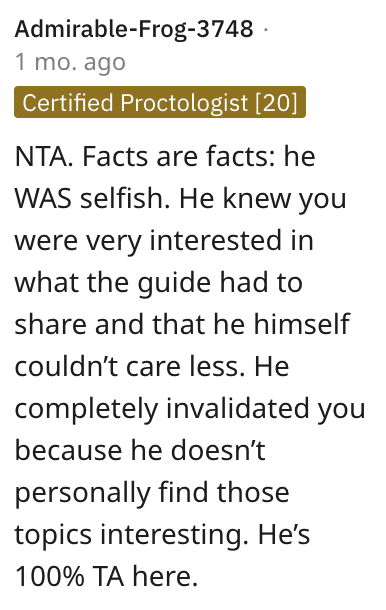 Another Reddit user said it sounds like her husband is only there for the parts of parenthood that he likes.

And this individual said she’s NTA and that everyone deserves free time.