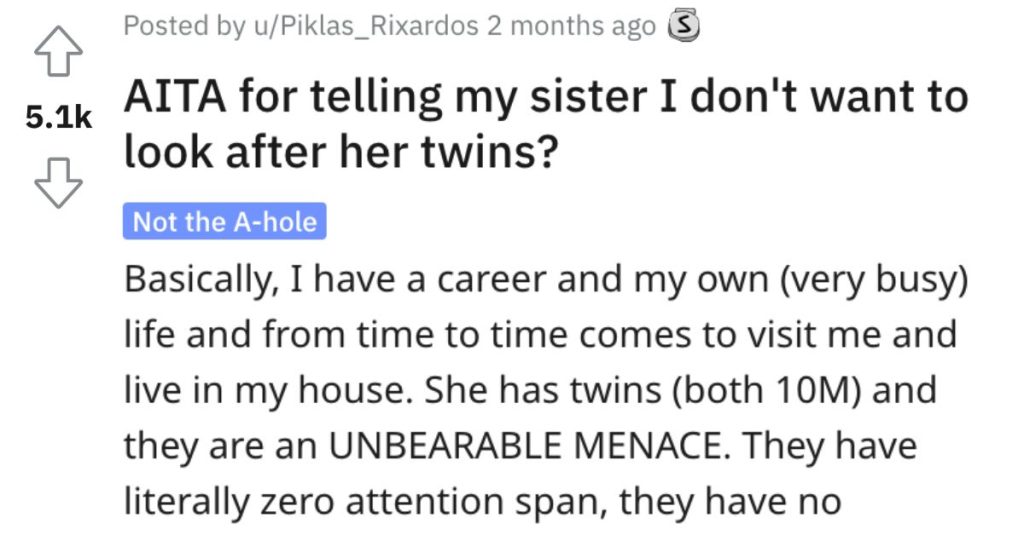 In the story you’re about to read below, the man who wrote it says his sister’s twin boys are an UNBEARABLE MENACE.

So you can’t really blame him for not wanting to watch them, right?

AITA for telling my sister I don’t want to look after her twins?

“Basically, I have a career and my own (very busy) life and from time to time comes to visit me and live in my house.

She has twins (both 10M) and they are an UNBEARABLE MENACE. They have literally zero attention span, they have no interests, I have tried everything, from trying to find something that interests them (e.g. programming in Scratch, watching movies, playing video games etc.), I’ve tried to get them to exercise but in a fun playful way, nothing, all they do for hours is jump around and endlessly watch Tik Tok videos and Youtube shorts.

My sister obviously does not help at all. She hasn’t taken her children to visit the specialist. Whenever she visits me she always dumps her children on me and then goes out for hours partying (she has broken up with her ex [34M] because he was abusive, and I was there for her and commended her for standing up to him).

Yesterday I couldn’t take it anymore and when she came to dump her children again, I told her that I’m simply too tired to watch after the children. She looked very angrily at me and said “You’re single and basically have no responsibilities other than your job, you CAN’T be as tired as I am so obviously you have to watch after your nephews”.

This angered me and I basically told her to shut the f**k up (I regret it now) and that she can’t dictate whether I’m not tired or not, and that I have a full time job only to come home most of the time when she’s around and watch after her children while she is out partying.

She left after that and hasn’t spoken to me since yesterday. I’ve spoken with my mother (59F) and she thinks that AITA and that I should apologize to my sister. While I want to apologize for my choice of words, I don’t think that I should be saddled every day with my sister’s children.

Check out what Reddit users had to say about this story.

One person said he’s NTA and it sounds like Grandma should take care of watching the kids.

Another individual also said he’s NTA and that he shouldn’t let his sister guilt trip him about this. 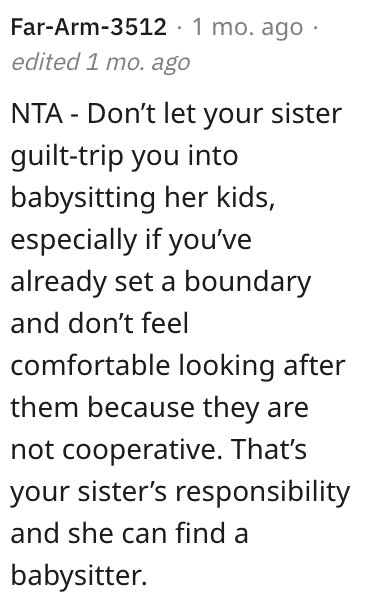