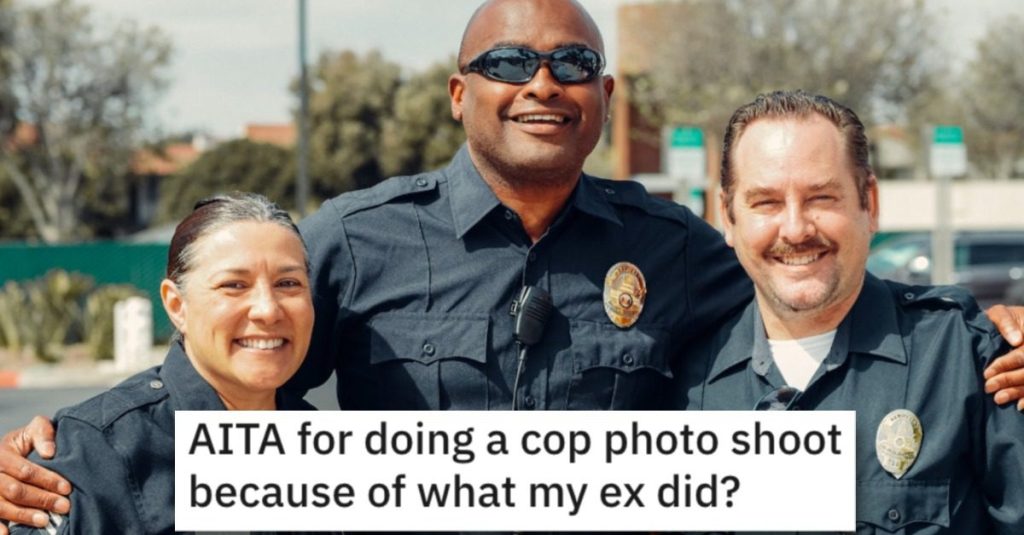 Is She Wrong for Doing a Cop Photo Shoot Because of What Her Ex Did? People Responded.

Who knew that someone would get so worked up about a cop photo shoot…?

But you never know what you’re gonna get when you read stories from Reddit’s “Am I the A**hole?” page!

So check this one out and let us know what you think about it in the comments!

AITA for doing a cop photo shoot because of what my ex did?

We were so in love that I changed my college plans to go to the same school as him (at his request). We’ve been living together in the same apartment for most of our time at school and planned on staying in it until we graduate next spring.

About three weeks ago he decided he was done and it broke my heart. I was, and am, devastated and my whole world feels like it’s upside down. Even though it hurt, the break up conversation was amicable. I cried and asked why.

He said he didn’t love me anymore and that he was going to move out when he could get some friends to help him. Then he went and slept on the couch for the rest of the week. At first I thought he was being classy about things.

Until it was time for him to move out. He said he’d be moving his things out during the day on Friday while I was in class, but when I got home everything was still here.

He showed up at about 7pm (right as all our neighbors were getting ready to go out for the evening), with his buddies and two cop cars that sat in the parking lot right outside our apartment with their lights on the whole time he gathered his stuff. I was mortified. Our relationship was not violent or dramatic or anything and he’s got 50lbs and 5 inches on me…

I still don’t know why he wanted police there while he took his stuff out of the apartment, but I spent the week after having to answer questions about it from everyone we know (word traveled fast). The next weekend, my best friend showed up unannounced with a bottle of wine and two Party City cop costumes to try and cheer me up.

We took all sorts of goofy pictures of her handcuffing me and both of us trying to look stern. It was the first time I smiled since the breakup and I decided to post some of the funnier ones. I didn’t expect him to see it since he blocked and unfollowed all my socials after the breakup.

I woke up the next morning to texts from him and a bunch of his buddies saying how terrible I am and that I should be ashamed for making fun of him. I’m honestly just trying to move on with my life and heal with humor, but maybe I was petty for posting the pics.”

One reader argued that she’s NTA and that he doesn’t get to comment on her posts anymore now that they’re done. 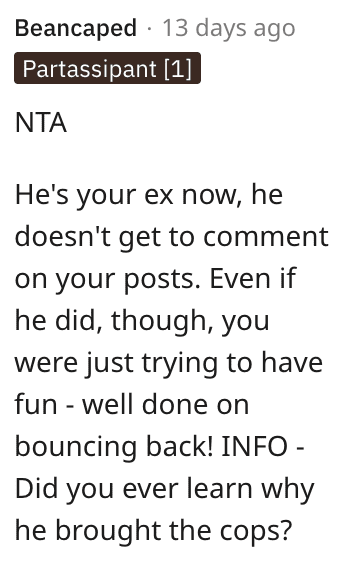 Another Reddit user had a good idea of what she should needs to tell people about what happened.

And this individual made a good point: this guy is probably making stuff up to his friends so he doesn’t look bad. 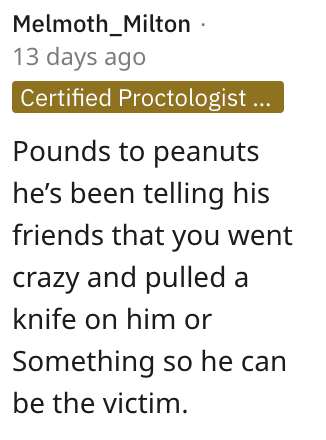