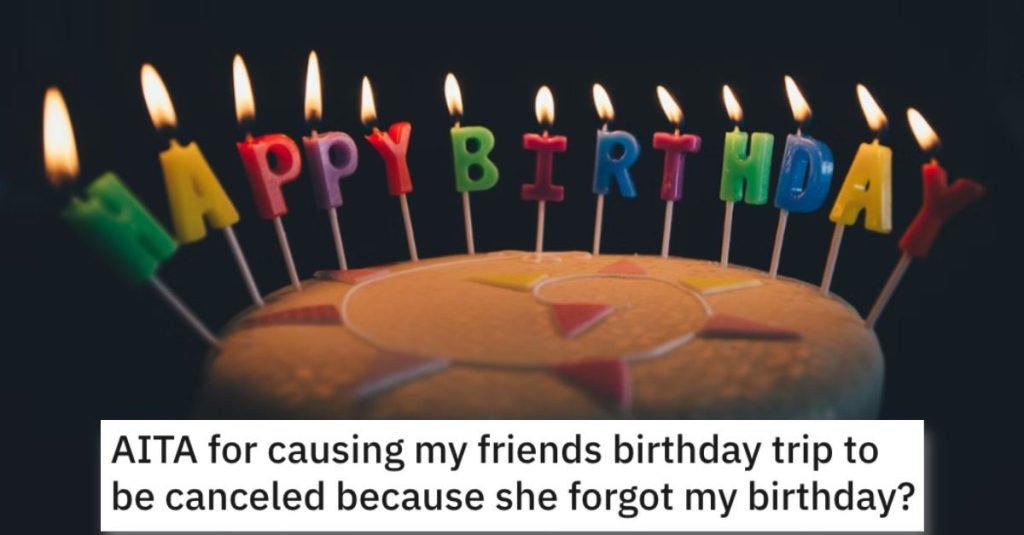 She Caused Her Friend’s Trip to Be Canceled She Forgot Her Birthday. Is She a Jerk?

Do people still care about birthdays after they turn 21?

I guess the answer is a resounding YES after reading this story from Reddit’s “Am I the A**hole?” page.

Read on and see if you think this woman was out of line or justified for her actions.

AITA for causing my friend’s birthday trip to be canceled because she forgot my birthday?

“I 22f have been friends with “Mary” 22f since we were 8 years old. Neighbors to best friends and we still remain friends to this day.

As adults we drifted away some, but as of the last two years, I have been apart of her now friend group. It’s one of those situations where I only come if Mary comes, and I am actually ok with that since they are mainly her friends. Despite busy schedules and some of us still in college, I only see everyone once a week or every other now.

I will say this, birthday’s are a big deal with us. Especially with Mary. One time when we were teens I forgot a certain date (not a birthday, an anniversary) and she would not speak to me for awhile she was so upset. Remember this for later.

Parties are always thrown and in the past, they even went to Vegas to celebrate. Next year we are going to Vegas to celebrate Marys birthday and that was planned 8 months ahead. We are supposed to be buying out tickets in October. Birthday parties are really not optional either, everyones gotta go! We also do gifts and the usual stuff.

Usually everyones birthday is discussed in advance and we do plan something, but my birthday has never been discussed while I was around. I’m not the kind of person to plan my own party either. I knew I was going to be alone for my birthday because my boyfriend would be on a trip out of town that was unavoidable and we had known for a while. My friends were also aware.

I texted Mary and asked her what we should do that weekend (not mentioning my birthday) and she told me she will “most likely be with her new boyfriend (of two weeks) but she wasnt really sure yet”. She said “yeah I’ll probably be with him on Sunday” (my birthday). I said “oh ok.”

I was hoping maybe they would remember and even my boyfriend said “hey maybe they are throwing you a surpirse party” to get my hopes up.

I told Mary I will not be going to Vegas either with them for her birthday. That will make everything more expensive for eveyone and they will now have to cancel the trip overall since another person backed out before me. Its just too expensive with less ppl. Now her birthday trip is ruined. If I go, the trip is back on but I’ve decided against it.

My friends are very upset that im being this sensitive about my birthday enough to ruin a whole planned trip, relying on me as a participant. Now I feel bad because not only was my day ruined, now hers is too, as well as everyone looking forward to the trip. It is all my fault that the trip is canceled now. Everyone is so busy with school/jobs/life everyone just forgot.

This reader said she’s NTA and that her friends should have remembered her birthday. 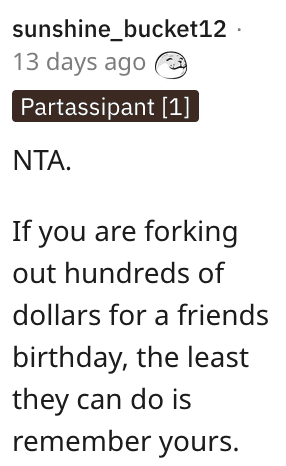 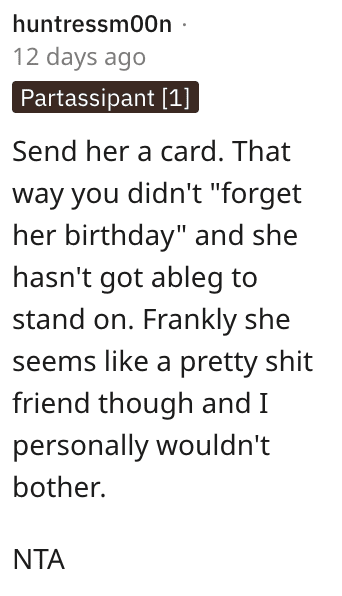 And another person also said she’s NTA and she shouldn’t feel bad about backing out of the trip. 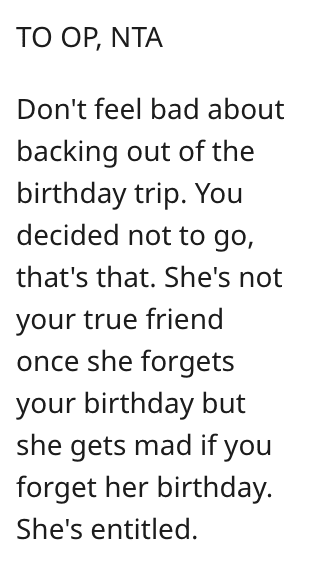