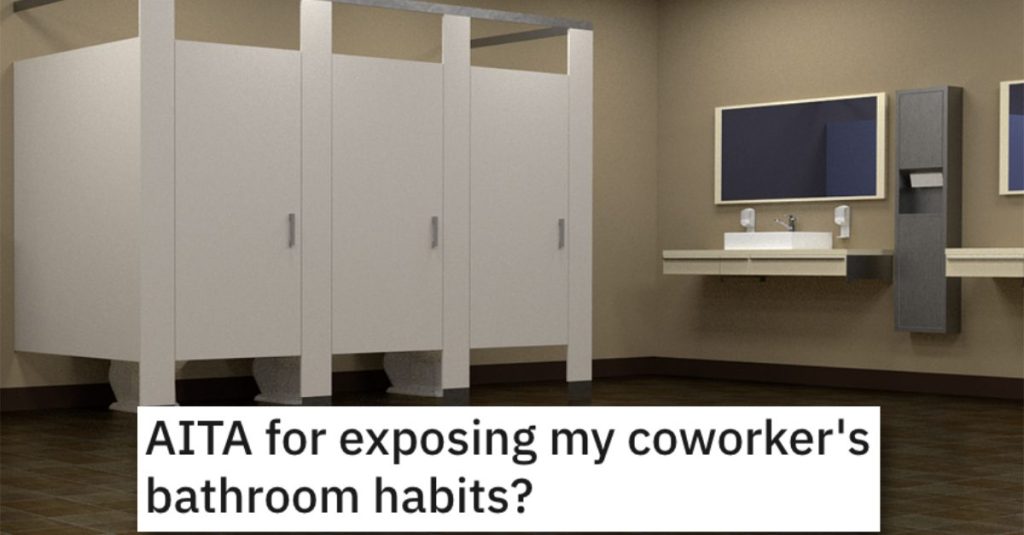 Is She Wrong for Exposing Her Co-Worker’s Bathroom Habits? People Shared Their Thoughts.

Right off the top, this DOES NOT sound like a good work situation.

And the woman who wrote this story wants to know if she’s acting like an a**hole because she exposed her co-worker’s bathroom habits.

Let’s see what she had to say.

“I (25F) work at a smaller company of about 15 people. I get along with pretty much everyone with the exception of someone we’ll call Alexis (40F). Alexis is very socially conservative and I am not. I do my best to not talk about things I know will cause an argument, but they sometimes happen anyway.

One time I used the bathroom right after the cleaning crew finished cleaning it and didn’t bother putting the toilet seat down because I was just going to squat to pee. I washed my hands and when I exited, I bumped straight into Alexis. I apologized and went on with my day.

For the next two weeks, I thought Alexis was being particularly sanctimonious, but I didn’t say anything as it wasn’t too out of character. The subject of women’s sports came up during lunch and she made a snide comment along the lines of, “People like OP ruin them for everyone else.”

I’m immediately confused. I’ve never been athletically inclined at any age, so ask, “Do you mean tall people?”

“No, ‘women’ that are still biologically men,” she says with a glare.

At the time, this came out of left field. I am a cisgender woman. While I am still a tomboy in my interests, I am very physically feminine presenting. I said, “Okay, one: There is nothing wrong with being transgender. Two: I am not transgender. Why would you even say that?”

“You can’t fool me. I saw you come out of the bathroom and the toilet seat was UP.” I stared in disbelief as she seemed convinced this was the biggest “gotcha” moment. She couldn’t even hide her smug smile.

“I squatted, Alexis.” The energy of the room was getting very awkward, so I decided to make a joke. “Are you telling me that you park your bare a** on the toilet seat in public restrooms?”

She turned bright red. Apparently she did, because she started muttering something about “not being weird” before bursting into tears and leaving the room.

My coworkers think it was rude of me to “expose” her like that, but I don’t think I did anything wrong for trying to defuse a situation she put herself in.

One person said this woman is NTA at all. 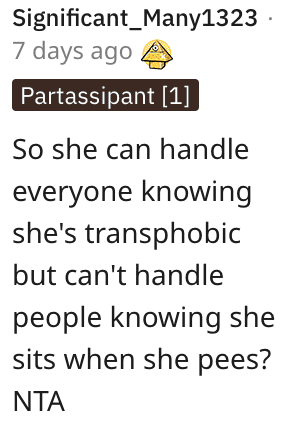 And this reader said she’s NTA and this woman got what she deserved.

Another Reddit user said this woman got offended and tried to turn things around. 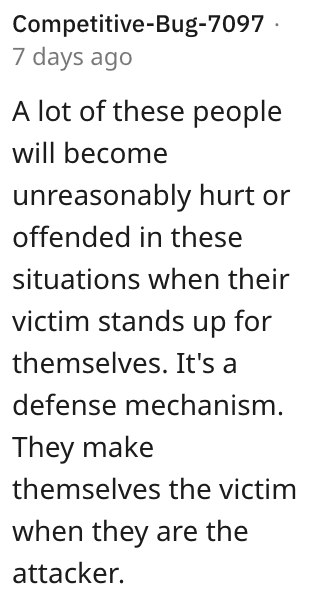