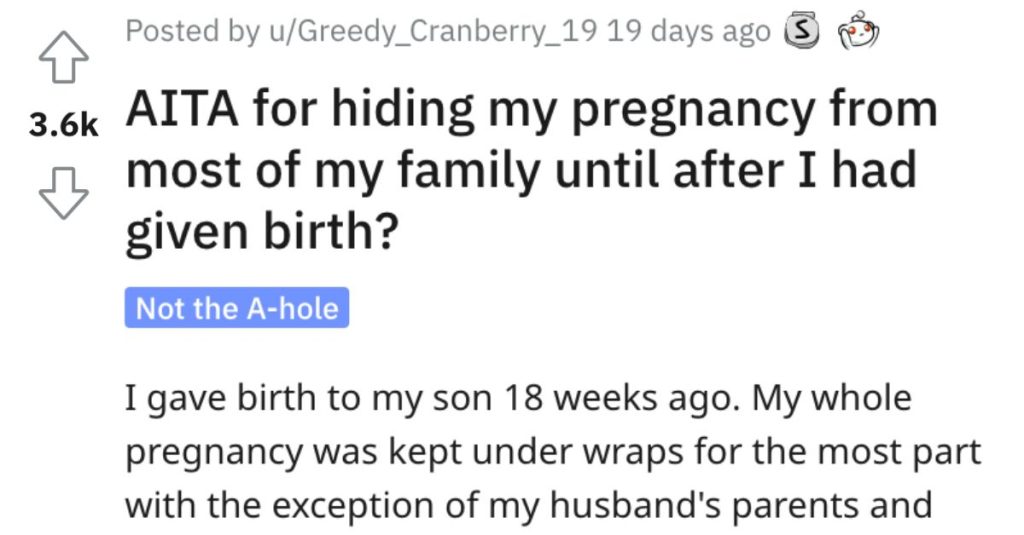 Is She Wrong for Hiding Her Pregnancy From Her Family? People Responded.

I guess if a woman wants to hide her pregnancy from certain people, even her family members, that’s her right and her choice.

But still, you have to wonder what led to a decision like that and if someone who does that is going a little bit too far…

Let’s take a look at this story from Reddit’s “Am I the A**hole?” page and see if this woman was out of line for hiding her pregnancy from her family.

AITA for hiding my pregnancy from most of my family until after I had given birth?

My whole pregnancy was kept under wraps for the most part with the exception of my husband’s parents and my sister. Husband’s parents because our son is likely to be their first and only grandchild. My sister because she has always been my support person. The news of me having a baby did not go over well with my dad, his wife or my half sister.

So for people wondering why I kept it from them. There are two reasons. A few years ago I thought I was pregnant and had miscarried but the truth was more complicated. I had not been pregnant but had some undiagnosed issues that had made my periods always irregular.

I had two positive tests at home test and an inconclusive test at the dr, which they figured could be me having a misca**iage, but an ultrasound had revealed nothing but did show up some other stuff and more tests were done and diagnosis followed. I had been open about the positive test and when the truth came out my dad’s wife was smothering.

She told me that was when a girl needed her mom the most and she would not let me push her away like I always had. She married my dad when my sister and I were young and our mom had passed, so she saw herself as filling that mom role, but she was too pushy about it. Even after all I had been through she would not give me space when I asked for it and my husband had to make her leave our home.

The other reason is my sister has two kids. Through both pregnancies our dad’s wife tormented her with talk of how she’d need her, as her mom, she needed to be there for her baby as she was experiencing pregnancy and talked about how becoming a mom would bond her to her and make her appreciate her in a way she never had before.

My sister actually grew to despise her because of it. Neither of us were ever big fans of hers but it really made her despite her because she was so sure she would fully replace our mom by being here for my sisters pregnancy. Even told our sister she was being dramatic when she said she missed mom and hadn’t got the patience for her trying to force her way in. She said pregnancy makes women irrational and there’s no reason to miss a ghost.

My sister has not allowed our dad’s wife to be known as grandma to her kids ever since. She had considered allowing it before the pregnancy stuff but after the chance was gone and my sister would not hear arguments for it.

All this led me to keep quiet when I did successfully get pregnant. I actually don’t live super close to my dad anymore so I just stayed away. I also knew it would hurt their feelings but I honestly didn’t have it in me to care.

My dad was furious and his wife and my half sister still send me messages about how cruel and unfair I am and how I robbed them of the excitement and tainted the whole experience. They both said how dad’s wife becoming a grandma for the third time was important, especially give her other grandkids will never call her grandma, and I was selfish to take joy from her.

This person said she’s NTA and that she was doing the best thing for her and her child. 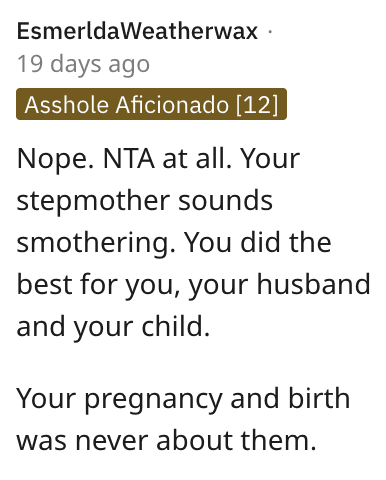 Another individual agreed and said she needs to keep her distance from these folks. 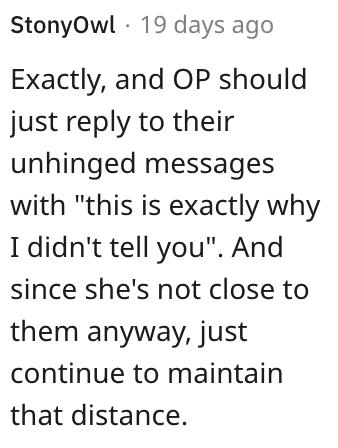 Another Reddit user also said she’s NTA and that you can’t force these kinds of relationships.