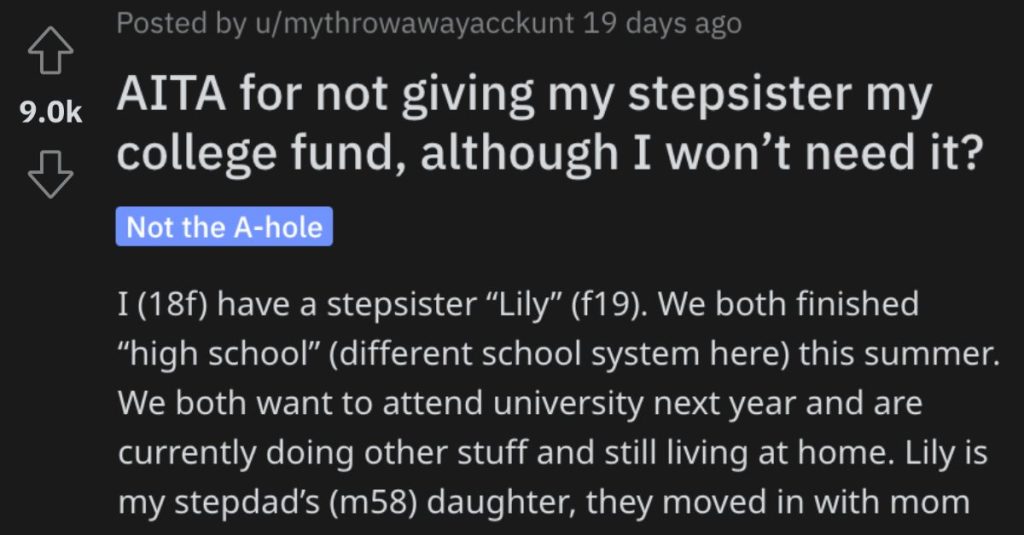 Is She Wrong for Not Giving Her Stepsister Her College Fund? People Responded.

What are you supposed to do if you have a college fund that you’re not going to use…but someone in your family wants to use it?

Hmmm, that’s a tricky one…

Check out this story and see if you think this young woman is acting like an a**hole toward her stepsister.

AITA for not giving my stepsister my college fund, although I won’t need it?

We both finished “high school” (different school system here) this summer. We both want to attend university next year and are currently doing other stuff and still living at home. Lily is my stepdad’s (m58) daughter, they moved in with mom (f52) and me 2 years ago. My (Ex-)boyfriend “Daniel” (m19) of three years and I planned on applying to the same (pretty prestigious and expensive) uni “A” and want to study the same subject.

So we still would’ve been able to be close to each other and continue our relationship. Daniel, Lilly and I all attended the same school and at our prom night I caught them making out in the back. I was, of course, devastated. Daniel tried to apologise to me and to “work things out”, but I don’t think, he can make up for this betrayal and I ended things. Since then him and Lily are together, I sometimes cheat them fcking at our place. None of my business anymore. We luckily don’t share a room.

Daniel however still plans to apply to uni A, while I don’t, because of him being there. I found another great uni, that will accept me (I know, because it only depends on the GPA) and isn’t as expensive. Therefore I will only need a small part of my college fund. My mom set this fund up with my dad and because they both earn pretty good money, it has enough money for multiple years at whatever uni I’d like. Meanwhile Lily has almost no money saved up for college, cause her parents didn’t set up a fund in time.

Now the issue: Lilly now wants to attend uni A to keep the relationship with Daniel, but doesn’t have enough money (without taking a LARGE loan). Therefore she asked me for almost my whole fund, since I “won’t need it anymore”. I don’t want to, because I have other purposes for me money.

But she and stepdad are calling me a selfish brat, that isn’t capable of sharing. My mom says, it’s my money and I get to decide what to do with it. Daniel recently also started texting me and pressuring me into giving Lily my money, so they can stay together.

AITA for not giving Lily the money, even though I didn’t necessarily need it, but she does?”

One person said she’s NTA and they gave her some advice about what to say to Lily. 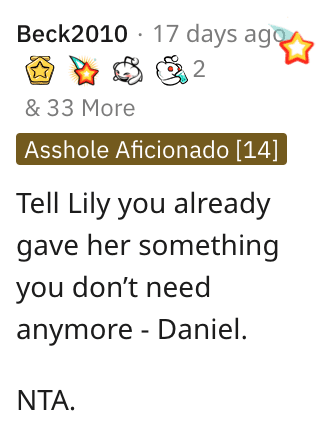 Another Reddit user said her stepdad, Lily, and Daniel are all the a**holes here.

And this person said the entitlement here is pretty HUGE. 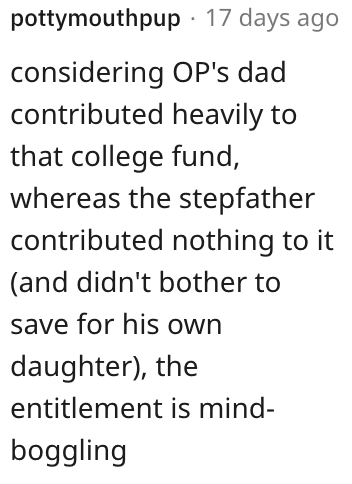