She’s Having a Dry Wedding and She Told Someone They Have a Drinking Problem. Did She Go Too Far?

This is just my opinion, but if a person is getting married, it’s up to them to decide if they want to have booze at their wedding or not.

Is this woman wrong for having a dry wedding and telling someone that they have a drinking problem?

Read on and see what you think.

AITA for a dry wedding and telling someone he has an al**hol problem?

My fiancé(25 M) and I decided on a dry wedding since we do not drink and see no point in spending money for al**hol. We were debating about getting a cash bar but then decided to no al**hol at all. (There will be a wide range of other drinks, not just juice and soda, provided).

We informed our guests via invitations with something along the lines of “You don’t have to be worried about choosing a driver or paying a taxi, since everybody will be able to drive”

So a friend (26M) called me and asked if I was joking about the dry wedding. I denied it. He asked two times more and I still denied joking. Then he asked what was wrong with me and how is supposed to have fun without al**hol and how he should function that night. And that it was not alright to chose a dry wedding.

This is where I might have been the AH:

I told him that I was not obligated to provide al**hol to him just because he is not able to have fun without it. And that, if he needs al**hol so badly and cannot function without it for even one night with people he knew, that he might be having an al**hol problem and should consider a therapy to treat it.

He flipped out on me and I took his invitation back until he apologises because he used many slurs on me.

Our friends are divided about me being the a**hole. Some say I was right, other says I was not right.

One person said she’s NTA and that she can do what she wants at her own wedding. 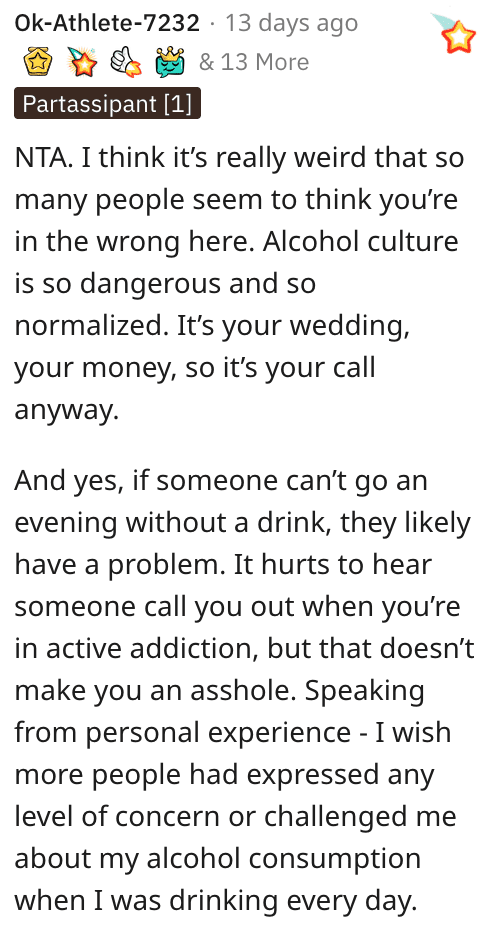 And this reader had a lot of thoughts about the dangers of al**hol. 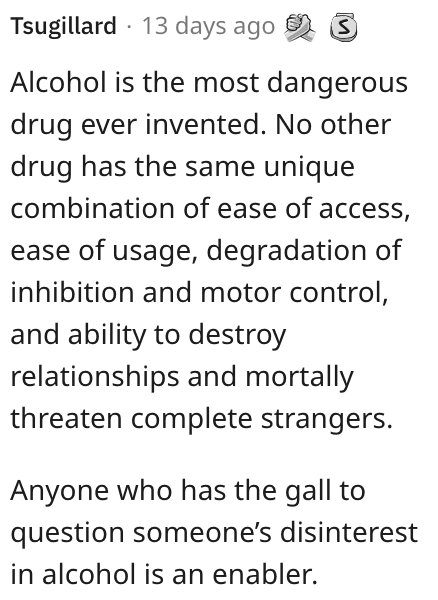 Another Reddit user said they’ve been weddings with no al**hol that were a lot of fun, so what’s the big deal? 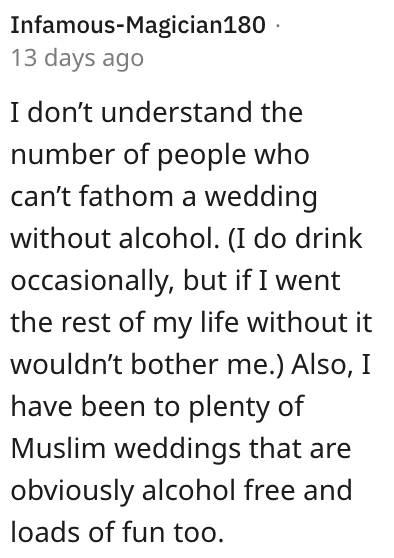