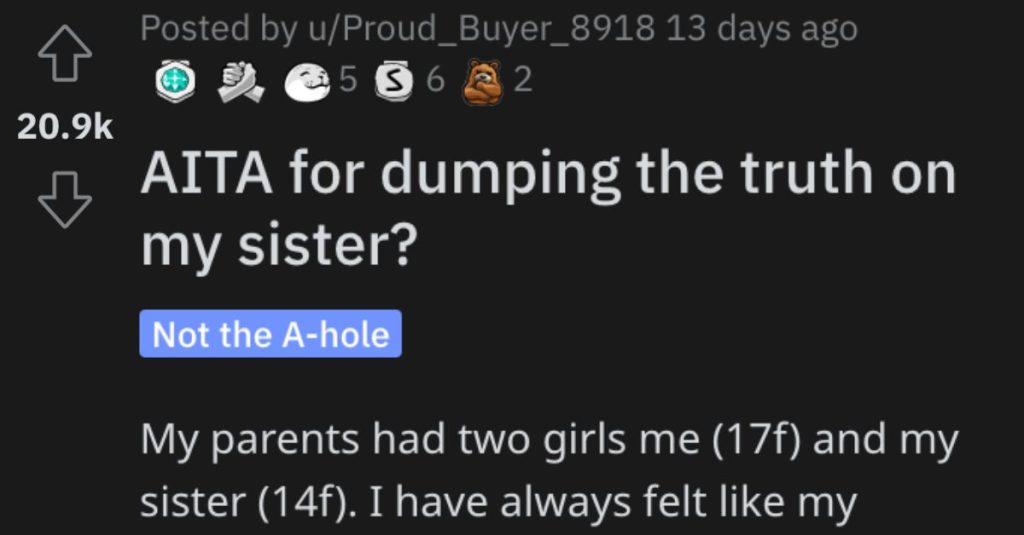 Is She Wrong for Speaking the Truth to Her Sister? People Shared Their Thoughts.

Speaking the truth is good, right?

But what if it leads to some seriously hurt feelings?

Yeah…that’s a tough one…

Check out this story from Reddit’s “Am I the A**hole?” and see if you think this teenage girl was out of line for giving her sister a dose of the truth.

AITA for dumping the truth on my sister?

I have always felt like my parents saw me as a babysitter, as a third adult in the house, and have expected me to be a 40 year old kid/teenager. Whereas my sister was their baby. They spoil her rotten. They adore her. She has never wanted for anything and they do everything to make her happy.

I was expected to help take care of my sister for as long as I can remember. She’s not special needs, was never sick, wasn’t even a preemie either. But that was the dynamic that was set up. I remember I would come home from school and mom would have me help feed my sister.

She would have me watch her then while she was in and out of the house. I would be told I needed to play with her if my sister was upset. She’d miss me a lot and my parents would insist I dedicate my time to her once I was home. We’d go out as a family and she’d want something and they’d get it for her. But I would be told to act my age if I wanted something.

She would get to hang out with friends whenever she wanted, would have really amazing birthday parties and sleepovers that I was never allowed to have. I also never got to attend sleepovers at other friends houses. There were times my parents would take her to do really amazing stuff and I was left behind.

Over time my sister started to get annoyed by my pulling back when I was around 15. I kept to myself, I’m moody around them, I don’t engage in the “family”, I take the punishments rather than do chores since she has none assigned to her. My parents h**e that I won’t be the little house keeper they wanted. My sister has told me I’m a brat and ungrateful for not helping our parents who are amazing. Over time it has gotten worse.

Then she heard me making plans to leave with my friends in a couple of months. She was so p**sed that I was going to leave the family behind and that I hadn’t told the family anything. She talked about how mom and dad have saved for us to go to college and I just wanna run away. Something broke inside me when she said that. I told her SHE has a college fund waiting for her, but I don’t.

I asked her how she’d feel if she was supposed to juggle a younger sibling, taking care of the bulk of household chores, schoolwork and not getting time with friends. That the only reason you have s**t is because you work, but it leaves you exhausted because you already have so much on. I told her that is my life and she doesn’t make me want to stay any more than our parents do.

To cut this short she’s upset and I was called an a**hole for being so mean to her. My sister said I was an a**hole for dumping all that on her shoulders.

Check out what people on Reddit had to say about this.

One person made it simple: she’s NTA but her parents definitely are. 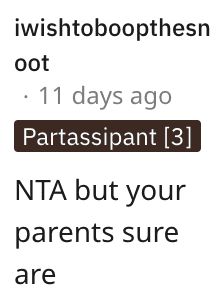 And this individual said her parents treat her like a maid and it sounds like her childhood was taken from her. 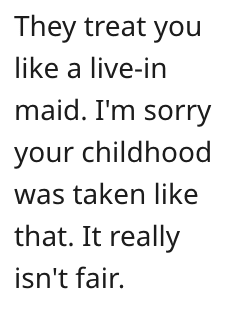 And this reader said she needs to get some therapy to work through this trauma. 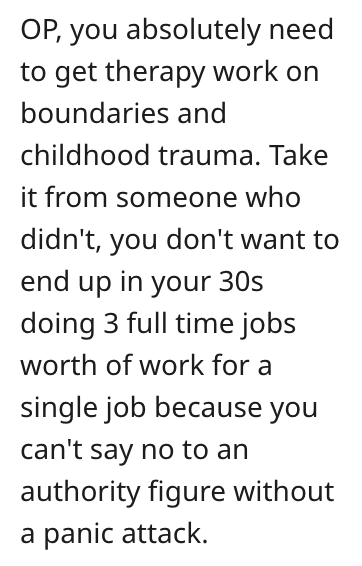