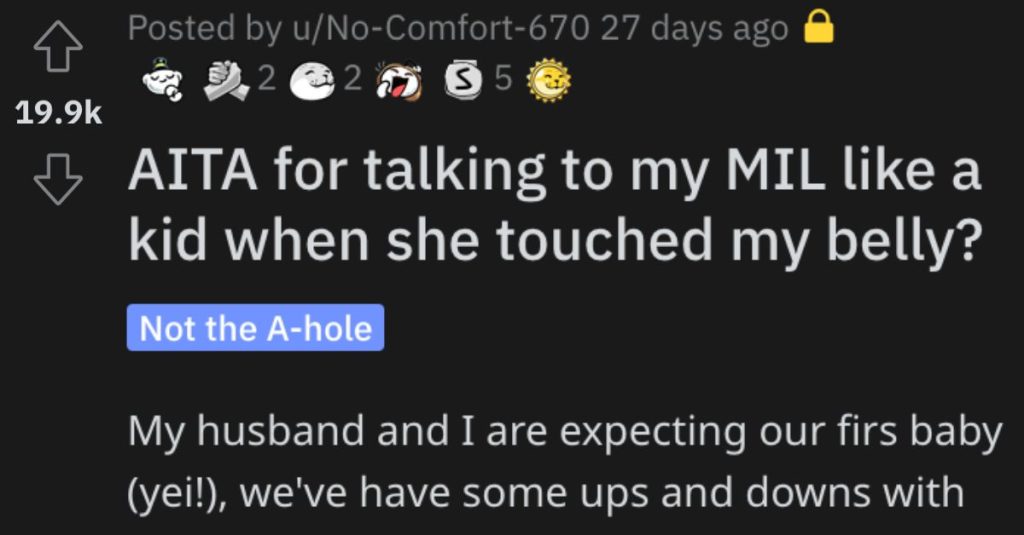 She Talked To Her Mother-In-Law Like a Kid After She Touched Her Belly. Was She Wrong?

Well, this is kind of a weird one, huh…?

But that’s the way it goes with a lot of stories on Reddit’s “Am I the A**hole?” page.

So let’s dig into this one and see what the heck is going on here.

AITA for talking to my MIL like a kid when she touched my belly?

“My husband and I are expecting our firs baby (yei!), we’ve have some ups and downs with his parents because they don’t understand boundaries, but overall it’s been really good.

For some context, I (24F) come from an a**sive home and I can’t stand being touched, before getting pregnant this wasn’t a problem with my in-laws, but now that I’m carrying a baby, it’s been awful with my MIL and my SIL because they think they can touch my belly whenever they want to.

Both my husband and I have talked to them, and said that while I would rather they don’t touch me at all, I can understand this is a big thing as a family, so I would simply like being asked instead of just feeling a hand at random times, but they rarely do it, so I just move when they touch me.

Now, onto the subject, a week ago my best friend threw me a baby shower and I invited my in-laws and since I don’t have any blood family left, we let them invite 10 more people which included aunts-cousins and my husband’s grandparents.

It was an overall lovely moment, but at one time, I was sitting eating cake while my MIL talked with my FIL’s sister, and while telling her something about the baby, she put her hand in my belly and idk, I just didn’t like it.

So I took her hand, removed it and said ”No, no, you know I’ve told you not to touch without asking first. You know how to ask first, do you? It’s easy!” with the most condescending voice I had. Both my MIL and my FIL’s sister looked at me shocked, and then my FIL’s sister laughed but my MIL got red in the face.

When it was done, my MIL approached me and said that what I did wasn’t nice and she just ”slipped” so I didn’t had to treat her like a kid. I just smiled and said that she touching me after being asked a million times not to was a kid behavior and I just called her out on that.

She left, very sad, and when we got home, my FIL called my husband and said he would love for both of us to apologize to each other, but I said no. So he called me an AH.”

Take a look at what people on Reddit had to say.

This reader said she’s NTA and that she needs to enforce her boundaries. 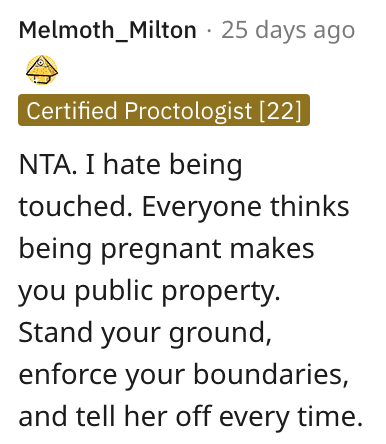 Another individual offered up some advice from their neighbor about these kinds of situations. 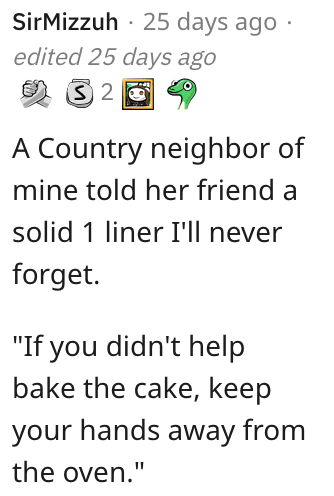 And another reader said that her husband and MIL don’t really have her best interests in mind. 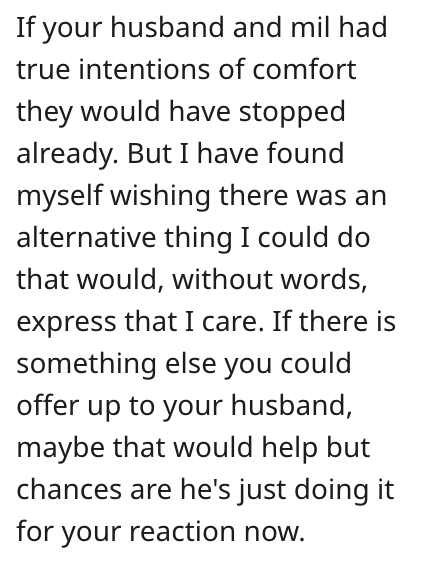