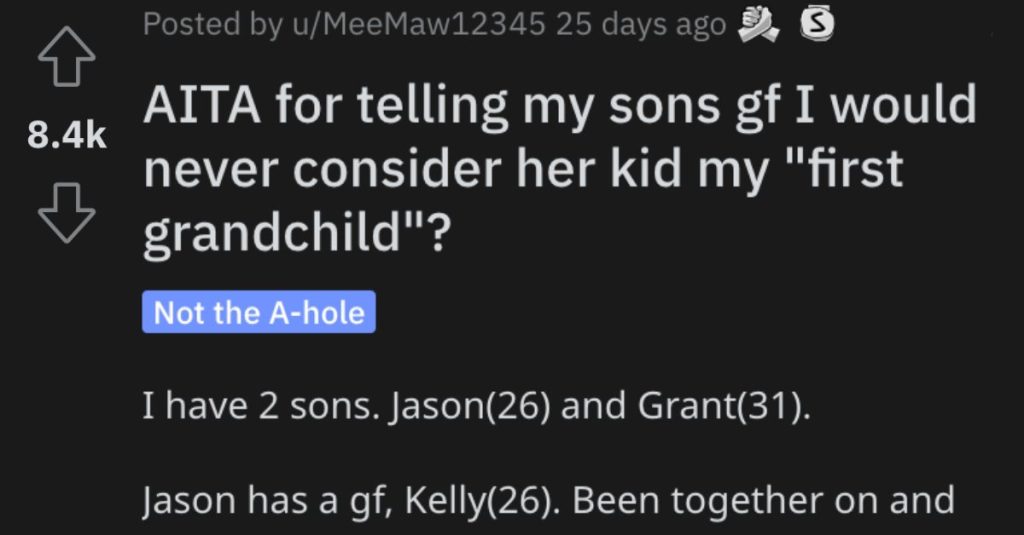 She Told Her Son’s GF She’d Never Consider Her Kid a Grandchild. Did She Go Too Far?

People sure do get pushy when it comes to who’s gonna be called a grandchild and who isn’t…especially when folks aren’t even related!

And that’s what’s going on here in this story from Reddit’s “Am I the A**hole?” page!

Read on to see if you think this woman was out of line for what she said to her son’s girlfriend.

AITA for telling my son’s GF I would never consider her kid my “first grandchild”?

Jason has a gf, Kelly(26). Been together on and off for a couple years. Jason tends to change gfs like he changes underwear, and this one has been quite the ride, full of tons of drama.

She also can not stand to not be the center of attention. I will add that both have had multiple other relationships through this with other people.

I am not for the relationship, especially since Kelly has a 10 year old son that is being dragged through this, but, my son is an adult, and he can make his own choices.

Grant also has a (now) fiance, Tory(28), she had not become fiance at this time.

They have known each other for over a decade, were usually casually dating, or “just friends” and have also had an off/on type thing over the years, but it was more of a “the timing was always wrong” thing.

For example, she left to go to school in another state, then she came home, then she left for a job. When they were younger she wasn’t ready for anything serious and was too busy with school or work.

I know they both kind of dated other people but they always stayed close.

Recently, he went to visit her and… few weeks later I found out I was going to be a grandma.

I adore Tory, and her and Grant are great together. I am SO excited. Especially when I found out that Tory had decided to move back and that she was moving in with him so that they could be a family.

Come Thanksgiving dinner she was at about 5 months pregnant.

Jason brought Kelly along, they got back together a few months ago… again.

Tory, had just officially moved back 2 weeks prior, so a lot of the family was excited to catch up with her, as she has come to a ton of family functions through the year and knew everyone.

We started talking baby showers and things like that, and I made a comment about wanting to go all out for her, because this was my first grandchild (this is also something I want to do because Tory’s mom d**d when she was 14 and after that she bounced around the foster system, and doesn’t have any real family support, so i wanted to make her feel loved and supported).

She threw a fit, said that my son chose a woman with kids, and they should be accepted by the family, and then said Tory basically baby trapped Grant.

I told her to get back to me after they got married, or at least managed to stay together more than 6 months.

Dinner was completely awkward for the rest of the night.”

This person said she’s NTA but could have said it a little more nicely. 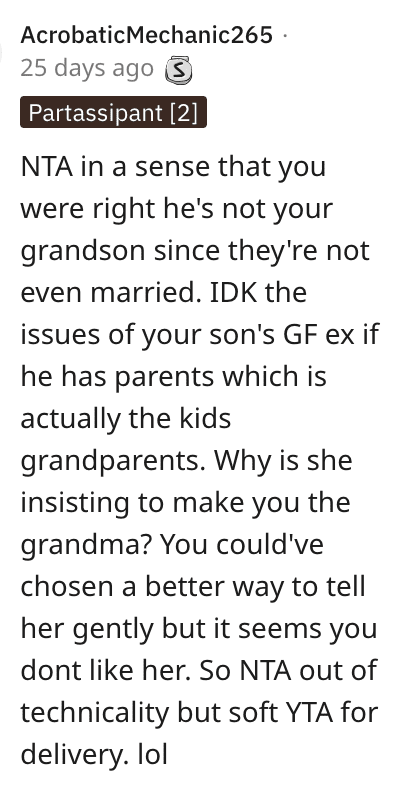 And this Reddit user said this woman is right for what she said.

Another individual said she’s NTA and that her son’s GF is doing a disservice to her son.