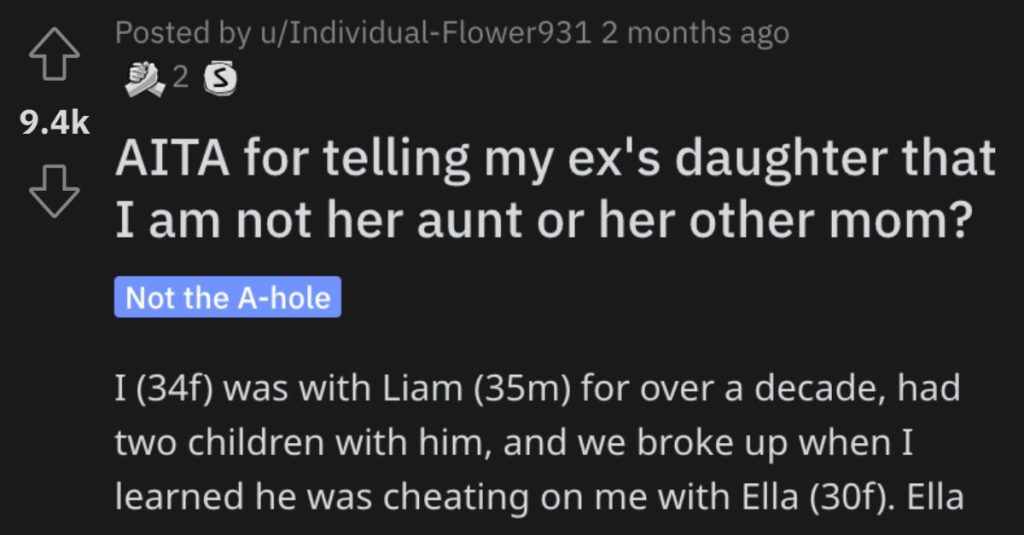 Is She Wrong for Telling Her Ex’s Kid That She’s Not Her Aunt or Her Other Mom? People Responded.

I’m not your mother!

Ouch…you know things aren’t good if someone had to tell a child that…but that’s what’s going on in this story that a woman shared on the “Am I the A**hole?” page on Reddit.

AITA for telling my ex’s daughter that I am not her aunt or her other mom?

Ella was pregnant when I learned about their affair and the two of them were very smug about the fact they were going to start a family with my kids who were young enough at the time to potentially see Ella as a second mom in their lives. Ella was downright nasty saying she could provide them so much better because her parents were wealthy and she’d be number 1 mom in no time.

We ended up getting shared custody of our children and the schedule was week on/week off. Ex and I had to meet at a neutral location per our custody order to reduce conflict and any problems with the exchange of our children. The judge also ruled that Ella could not be present for exchanges given her alienating language toward me that was not totally hidden from mine and Liam’s children.

My ex and Ella got a big shock when her family did not support them following the realization that she helped him cheat and had gotten pregnant with someone who had a family. So they ended up struggling. While I was doing better than ever after making a career shift I had wanted to do for a bit before that. They of course realized over time.

This was I think just after they had their daughter and around the time they got married. Then the name I had heard for their daughter was suddenly changed… to my name, and they started being super kiss a** with me and saying how my kids deserved one family unit and how their daughter was named after me, was my kids little sister, how she needed someone to help support her and give her the life her siblings have, etc. I told them they were bats**t crazy and I was not their daughters anything.

They had two more girls since then. And apparently they are telling those girls that I’m their aunt and/or their other mom, hence the older of the three being named after me. The oldest is always trying to seek me out.

My ex brings her during exchanges of our kids and she rushes out of the car with my kids. They have told me how uncomfortable it makes them because they aren’t allowed to correct it. I told my ex he needs to say something. I said the same thing to Ella but they didn’t.

A few days ago their oldest sought me out again and asked if she could stay when my kids stay with me and how she’s so glad I’m her aunt and her other mom. I told her I wasn’t. I said so kindly. But I was also firm that I was not her aunt or her mom in any way. She got upset and ran back to her parents and then I got dumped on by Ella for breaking her daughters heart. She said they had only tried to be nice and make the best of the family situation for the kids and I was TA.

I feel kind of bad because the little girl was devastated. At the same time, I don’t have any interest in being part of those three girls lives in any kind of way, except for when I see them for my kids. 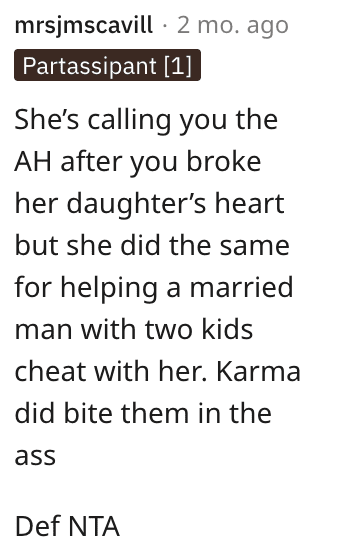 And another individual said Ella is the a**hole in this story. 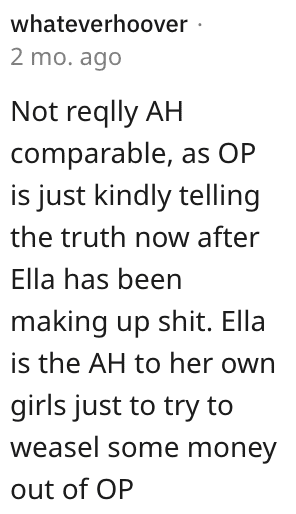 And this Reddit user said they feel bad for the kids stuck in this bad situation. 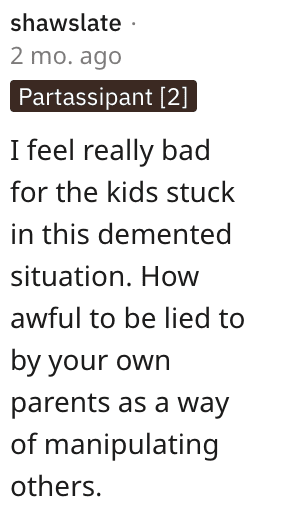