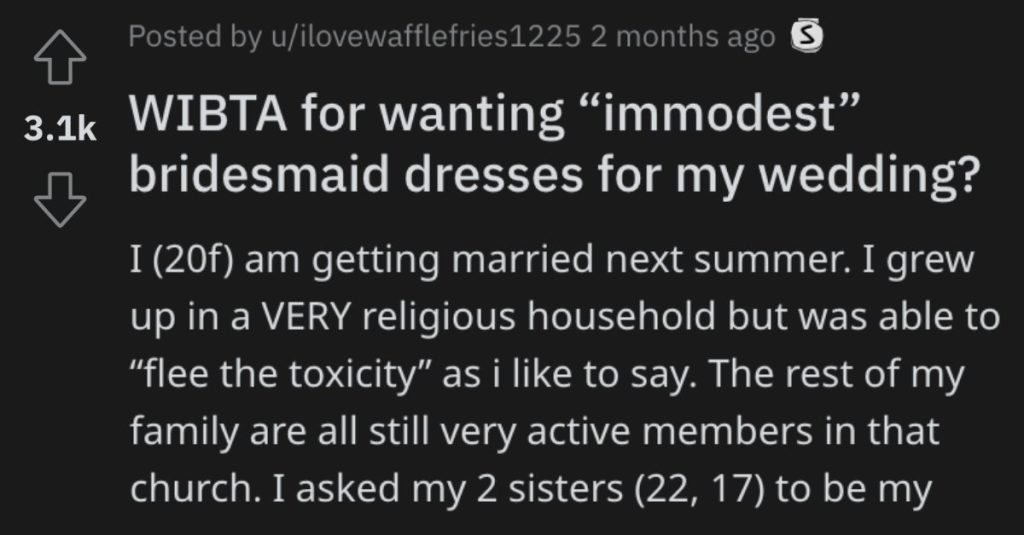 Is She Wrong for Wanting “Immodest” Dresses for Her Bridesmaids? People Responded.

When do bridesmaids’ dresses go too far?

And this “Am I the A**hole?” story from Reddit may finally get to the bottom of that burning question…

WIBTA for wanting “immodest” bridesmaid dresses for my wedding?

“I (20f) am getting married next summer. I grew up in a VERY religious household but was able to “flee the toxicity” as i like to say. The rest of my family are all still very active members in that church. I asked my 2 sisters (22, 17) to be my bridesmaids.

Within said religion, once you reach a certain age you’re eligible to make extra promises and one of those promises is that you’ll remain chaste (no premarital s**, wear modest clothing, etc). You’re then given “the magical underwear” to wear at all times. They essentially resemble knee-length shorts and a cap-sleeve t-shirt, but an “underwear” type material. My older sister has been wearing these for about 3 years now.

Earlier today, we went shopping for bridesmaid dresses. The vision i have for my wedding is simple, but particular. I would prefer my BM’s wear the same dress (Spaghetti straps, knee-length, flowy, semi exposed back and chest).

My mom and older sister, during the entirety of this appointment, sat there and told me that I needed to be accommodating towards her religious needs with finding a dress for her that completely covers her underwear. Normally, i wouldn’t have a problem with this, but this is for my wedding! I’ll wear what she wants for hers, so i don’t get why it’s such a big deal for mine.

I don’t know if maybe it’s because I’m looking at it all with “s**t-colored glasses” but I don’t think it’s the same thing. They’re just underwear to me, and people have to wear underwear to accommodate different clothing all the time so why is this any different?

Anyways, part of me wants to just rescind my invitation for her to be in the bridal party since it’s already caused so much drama, but i know that it will only cause more if i do. I’d be risking my younger sister pulling out as a BM and i would be risking losing the financial help my parents have offered (that I am INCREDIBLY grateful for!).

I don’t want her to be uncomfortable but i also want my wedding to look and be a certain way. So, am I the a**hole for not choosing a dress that accommodates her?”

This reader said that it sounds like this woman is too young to get married. 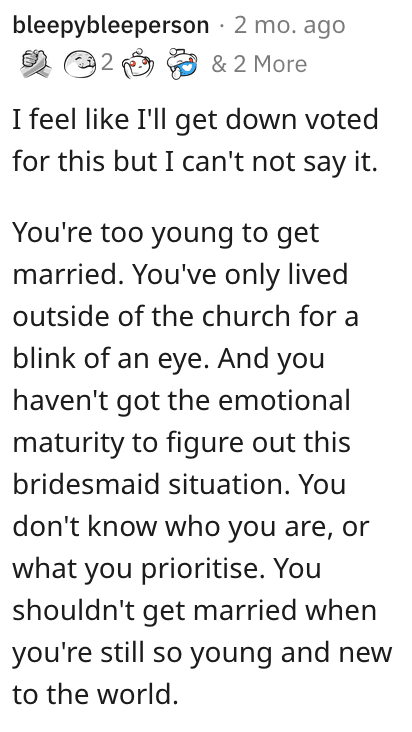 And this Reddit user said she’s an a**hole for what she doing to her maid of honor. 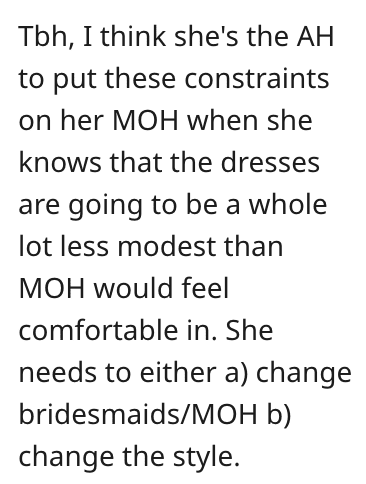 Another reader also said she’s an a**hole and you can’t make people where something they’re uncomfortable with. 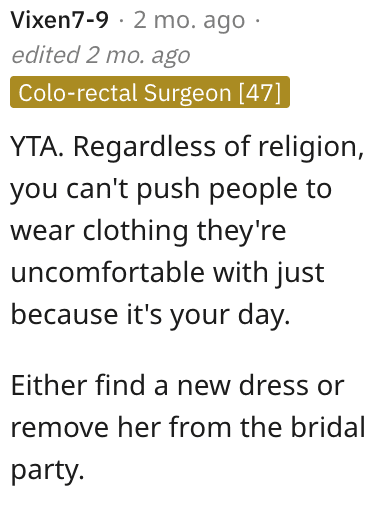