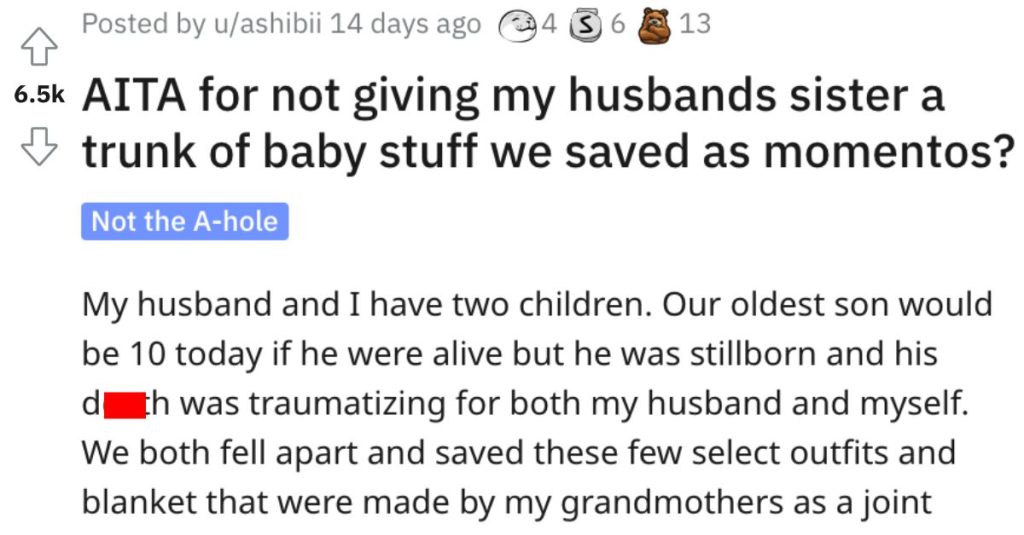 Is This Couple Wrong for Not Giving a Family Member a Trunk of Saved Baby Mementos? People Responded.

Well, this is kind of a weird one…

And you’ll see exactly what I’m talking about when you dig into this story from Reddit’s “Am I The A**hole?” page.

Go ahead and get started now!

AITA for not giving my husbands sister a trunk of baby stuff we saved as momentos?

“My husband and I have two children. Our oldest son would be 10 today if he were alive but he was stillborn and his d**th was traumatizing for both my husband and myself.

We both fell apart and saved these few select outfits and blanket that were made by my grandmothers as a joint baby shower gift (they also donated a personalized trunk for us). When we had our younger son 2 years ago we used the clothes in the trunk for him but also made sure we maintained them as we wanted to keep them for a keepsake. All the other stuff we donated or gave away.

My husbands younger sister and her husband found out they were having a baby late last year. Their daughter was born a couple of weeks ago. Things with them are complicated and they’re struggling. They got a lot of donated stuff but they specifically wanted the stuff in our trunk, the blanket and one particular outfit she always admired especially.

My husband asked me how I felt and I admitted I couldn’t imagine parting with them. He nodded but didn’t say a lot. He told her we didn’t want to give those up but we would of course be getting them stuff when the baby shower came around. She was upset and said it wasn’t as meaningful. She asked several more times.

Then after she had her daughter she asked me specifically to give them to her. She used the whole “mom to mom” thing to try and convince me. I told her I just couldn’t imagine parting with them. She was mad. I don’t mean sort of mad either. I mean like furious mad.

She said we were selfish and we should be ashamed of ourselves for not wanting to share sentimental items, even just one.

Hmmmmm. Now check out what Reddit users had to say about this.

This person said that the sister-in-law seems “unwell”. 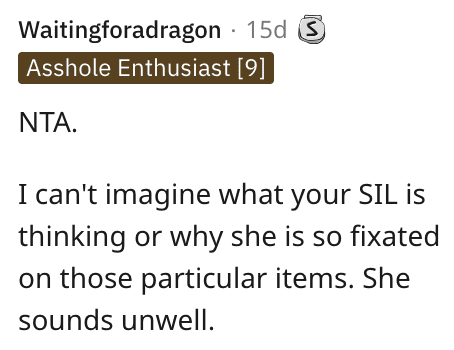 Another reader said that this story is just bizarre and shows a lot of entitlement. 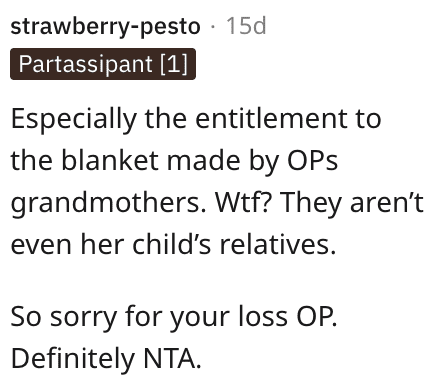 This individual said that the writer might want to hide the trunk because they wouldn’t be surprised if the sister-in-law tried to steal the trunk at some point. 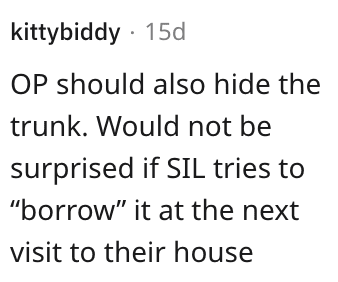 And finally, another Reddit user said that this could be an attention-gaining exercise.

I guess you never know… 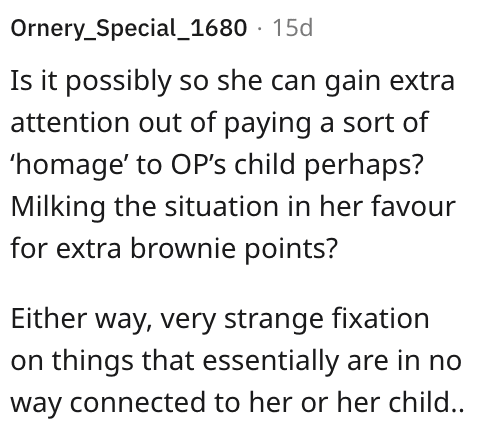 What do you think about how this story played out?