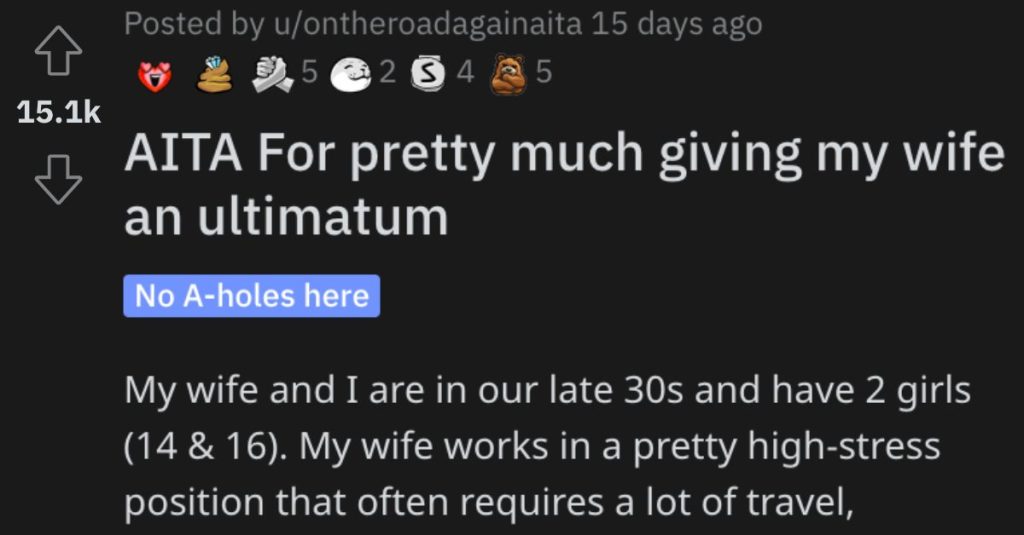 Is This Guy Wrong for Giving His Wife an Ultimatum? Here’s What People Said.

Giving OR receiving an ultimatum is never any fun.

But, when it happens, you know there are some serious problems that have been building up for some time…

And here’s a story from a husband who wants to know if he was wrong to give his workaholic work an ultimatum.

AITA For pretty much giving my wife an ultimatum?

My wife works in a pretty high-stress position that often requires a lot of travel, sometimes up to 2 full weeks a month. But the job is in her desired field and she’s worked hard to get to where she is, and it pays well which is a plus. I work a lower stress job with more flexible hours, but it doesn’t pay as well.

Because of my wife’s job, I have been the parent that attends to most of our kids’ needs. I take them to their activities, I attend all the games and recitals, I take them shopping, taught our oldest how to drive, etc.

A few weeks ago my wife got a job offer from a client of hers that she’s worked with for years. It would be a more stable position that would pretty much eliminate her travel, and would also come with a nice bump in pay. The only problem is that the job is literally across the country. Like 2,000 miles away.

When she told me about it she was beyond excited because this job would finally give her a chance to be at home with our girls again. She was talking about it like it was already decided that she would take the job and we would move. I tried to share in her initial excitement, but all I could think of was leaving behind the life that the girls and I had built here.

My wife sensed that I wasn’t as enthusiastic about the job as she was and asked me what was up. I told her that the girls are at an age now where uprooting their lives and leaving all their friends behind would be a pretty drastic change and we needed to get their input before making any decisions. She agreed and we spoke with them.

My wife got upset and tried to convince them how much better it would be for her to have a job that actually allowed her to be present in their lives again. But my oldest pretty much told her that she was being selfish for asking them to uproot their lives just so that she could feel better about herself.

My wife broke down in tears after the talk and confessed to me that she thought this new job would be an easy decision for us and I should help her convince our daughters that it was the right choice. I told her that I wasn’t going to do that.

I told her we should wait until the girls are done with high school before moving across country like that. She said this kind of job opportunity doesn’t come around that often and if she doesn’t take it then she doesn’t know if she’ll ever get a chance like this again.

She said she felt like I was forcing her to choose between her family and her career and I told her that’s pretty much exactly the decision she needs to make. She asked what would happen if she took the job and I told her I would probably stay here with our girls.

She called me an a**hole and now isn’t talking to me?”

Now let’s see what Reddit users had to say about this story.

This person said that the guy might want to consider moving for his wife’s job. 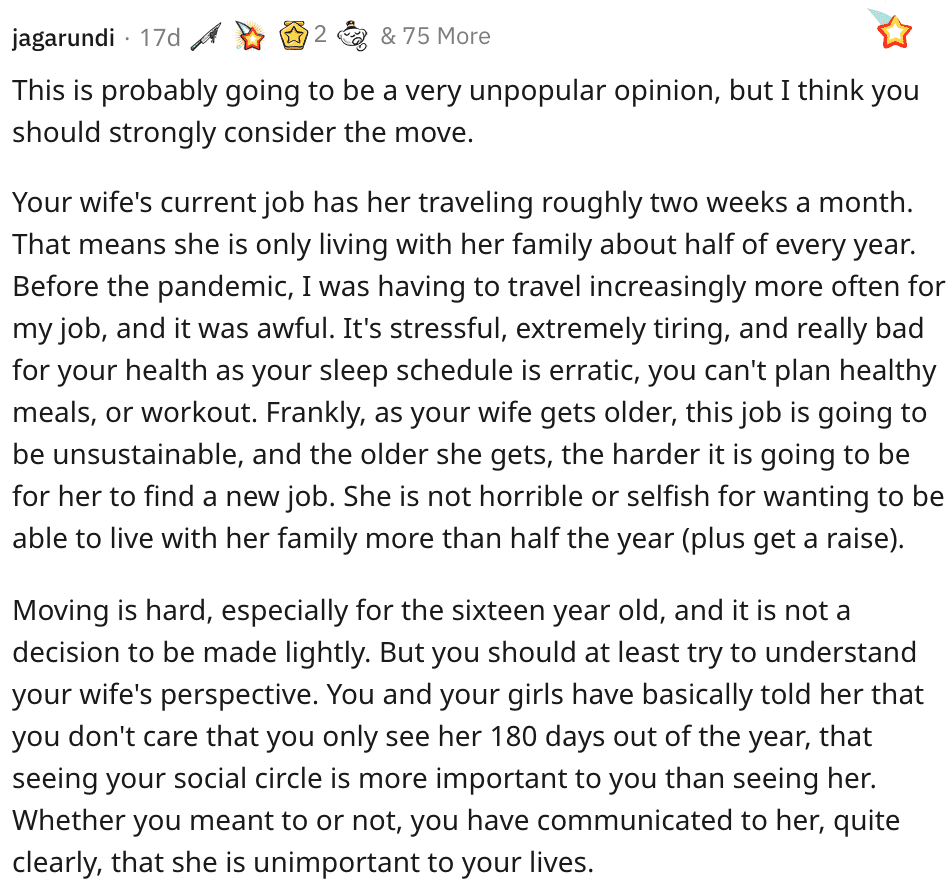 Another reader agreed and said this would probably lessen the stress on his wife. 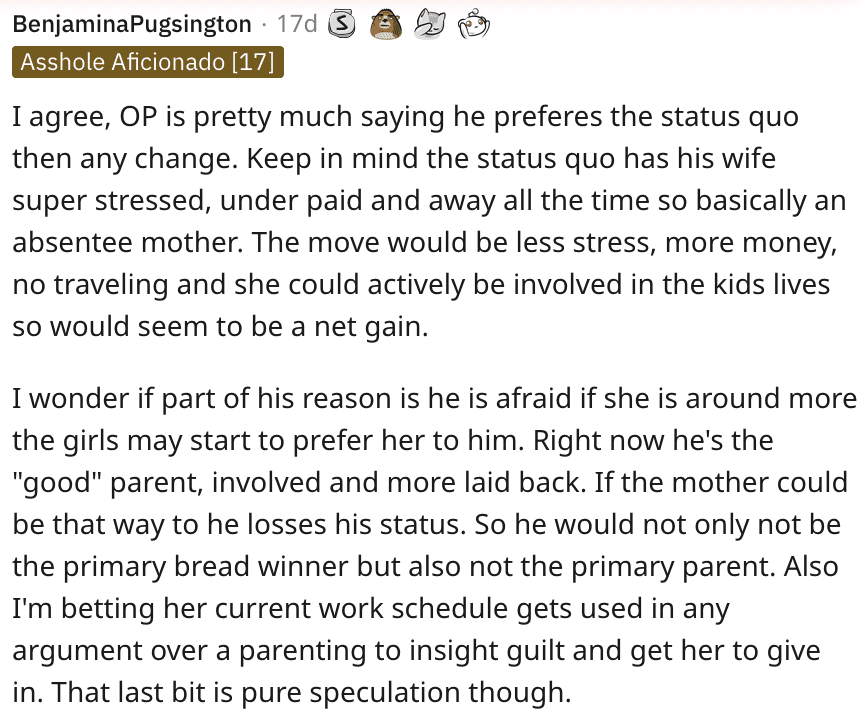 This individual took a different angle and said that both of these parents need to prioritize their children. 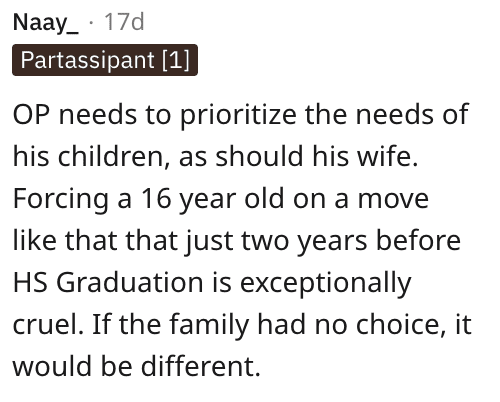 And finally, this Reddit user said that the mother shouldn’t make the whole family move because of her guilt. 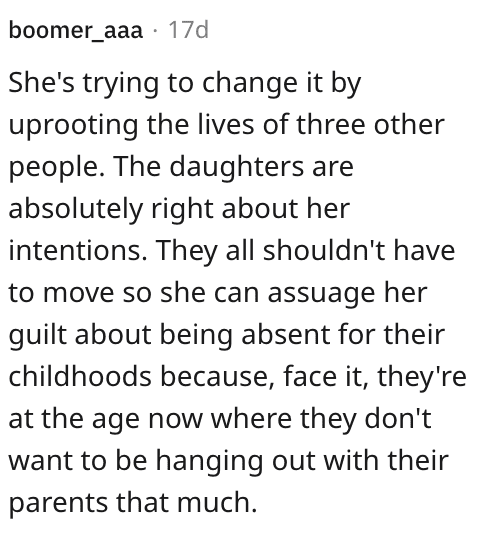