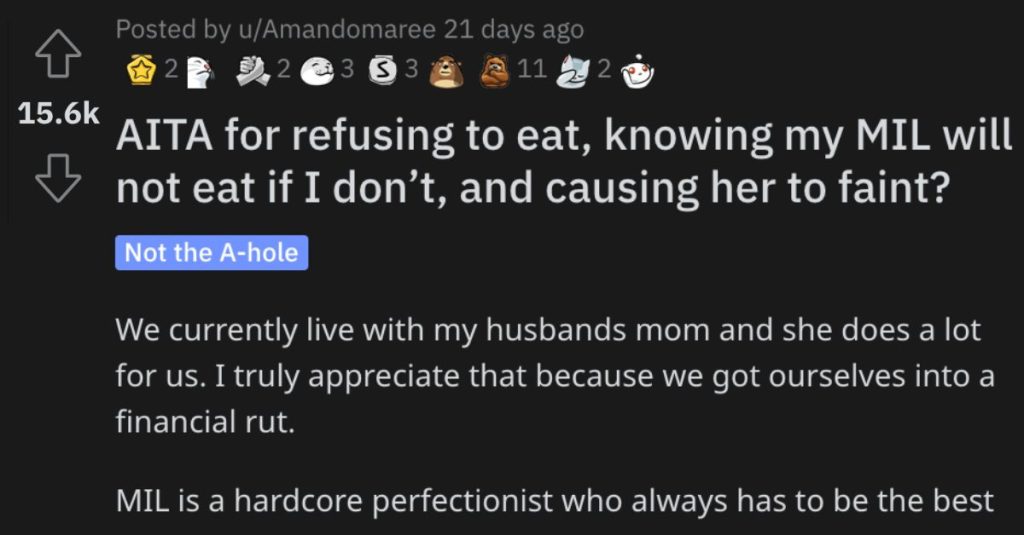 Is This Person a Jerk for Causing Her Mother-in-Law to Faint? People Responded.

This is kind of a weird story…I’m gonna say that right off the bat.

But what do you expect from Reddit’s “Am I the A**hole?” page?

It’s what people do over there!

So check out this woman’s story and stick around to see how Reddit users reacted.

AITA for refusing to eat, knowing my MIL will not eat if I don’t, and causing her to faint?

“We currently live with my husbands mom and she does a lot for us. I truly appreciate that because we got ourselves into a financial rut.

MIL is a hardcore perfectionist who always has to be the best at everything to the point it is completely toxic. She was taught growing up to never eat if someone else isn’t, and as a teen that spiraled into never be the only woman eating. It was ingrained in her by her very overweight mother to never let anyone think she was a “pig” not surprisingly mil and her sister both have serious issues with food.

This is insane obviously but she is also an ER doctor who doesn’t work normal hours, so this makes it even worse. We are someplace that is probably in the third or fourth wave so she has been working crazy hours.

The other day she took us after work to do some errands. We don’t have a car at the moment, but she said it was fine because she needed groceries. The grocery store sold food you could eat there and she asked if we wanted any. I had just eaten so I said no but she should eat since she just got off work. She insisted she wasn’t hungry and was just thinking about us.

By the end of the shopping she seemed to be shaking and asked again if we wanted anything. My husband said he’d eat something just because he felt bad for her. I wasn’t hungry and said no. She ended up leaving without eating. Then we went home and she fainted. I don’t know if it was just not from eating. She has been working like 20 hour shifts pretty routinely

Now her boyfriend is pi**ed at me and says I should have eaten something so she would. I said she is a grown woman and I don’t feel responsible but he said I know who she is, called me an ungrateful b**ch, and said it’s my fault she fainted.”

Let’s see what Reddit users had to say about this.

One reader said that this woman is not to blame for what happened here. 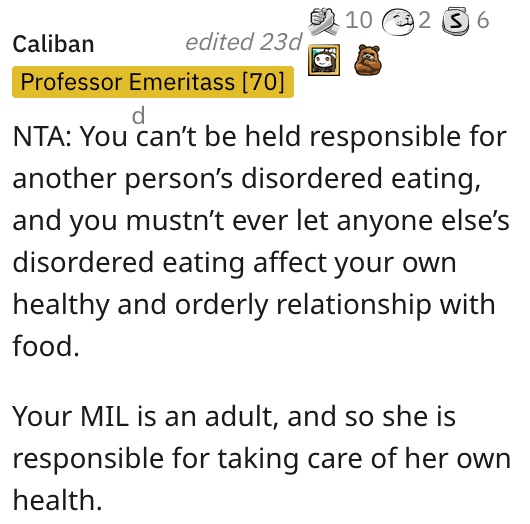 Another Reddit user said that the MIL should know what’s going to happen if she doesn’t eat.

Another individual took a different stance and thinks that the MIL is doing a lot to help out her son and her DIL. 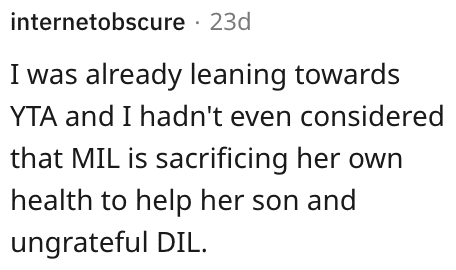 And lastly, this reader argued that the MIL’s eating disorder has likely been made worse by the current living situation. 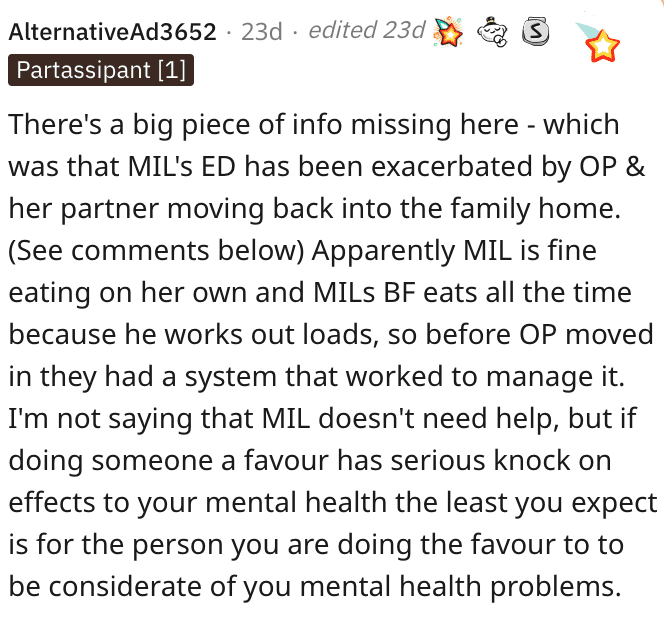