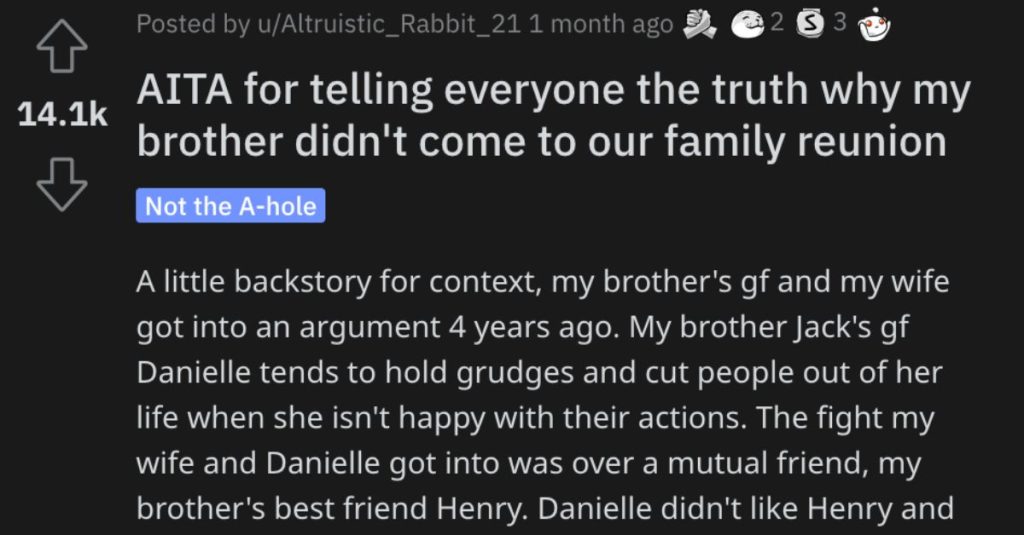 Is This Person Wrong for Saying Why Their Brother Didn’t Come to the Family Reunion? People Responded.

Family reunions seem to really bring out the good, the bad, and the ugly in everyone, don’t you think?

And here’s a story from Reddit’s “Am I the A**hole?” page from a person who wants to know if they’re wrong for telling the truth about why their brother didn’t show up to their family reunion.

AITA for telling everyone the truth why my brother didn’t come to our family reunion?

“A little backstory for context, my brother’s gf and my wife got into an argument 4 years ago.

My brother Jack’s gf Danielle tends to hold grudges and cut people out of her life when she isn’t happy with their actions. The fight my wife and Danielle got into was over a mutual friend, my brother’s best friend Henry. Danielle didn’t like Henry and told my brother it was either her or Henry, my brother broke up with her but eventually cut ties with his best friend and got back together with Danielle.

Danielle told my wife to stop inviting Henry to cookouts, parties, and events. My wife said no, Henry is a family friend and is more than welcome to come to anything we host.

Danielle said she needed to rethink their friendship feeling my wife didn’t side with her, my wife basically told her to grow up and f*** off. My wife and Danielle haven’t seen or spoken to each other since the argument. My wife did apologize numerous times saying she was out of line, Danielle won’t accept her apology and by doing so had my brother pick a side.

It has been a real nightmare where my brother has tried numerous times to reconcile, tried to meet his niece who is 2 and come to gatherings. Danielle gives him an ultimatum every time so he chooses to stay away to avoid conflict with his gf.

For the past 4 years every time we’ve had a family get together we’ve made excuses for Danielle and Jack saying they are busy or had prior obligations. My parents said Danielle’s biggest concern is family members will think of her differently if they find out she’s the one preventing my brother from attending family gatherings. She tends to put on act for family that’s she’s sweet and innocent, behind the curtains she controls my brother and has a very bad temper.

We had a family reunion over the weekend and once again everyone asked where Danielle and Jack were. I finally told everyone the truth that Danielle was still upset with my wife and she’s refusing to make amends and my brother isn’t allowed to go anywhere without her.

My parents said they have tried to talk to my brother alone but Danielle won’t let that happen. They asked how he liked being an uncle, I told them the truth that he’s never met his niece. He’s made a couple of attempts but Danielle wouldn’t let him so he hasn’t been able to.

The look on their faces was shock, mortified, and confused. Some asked for me to go into detail so I did, and others kind of just smiled and walked away.

Now my parents are saying I’m an a**hole because family is going to look at Danielle differently and I’ve made it awkward for any other family gatherings in the future for my brother and Danielle.”

This reader said this person is NTA and that his parents should be doing more to help his brother. 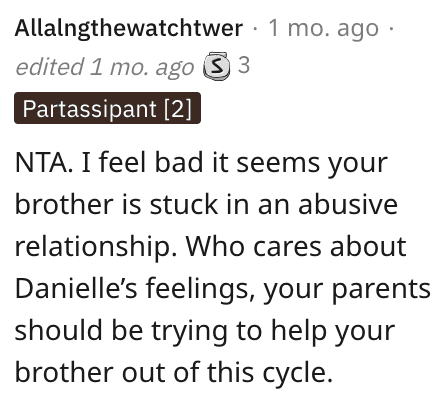 And another Reddit user said this person’s brother needs to kick this woman to the curb. 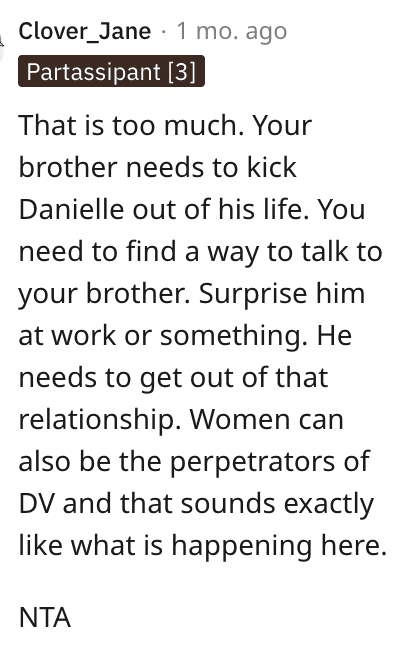 And this individual had a hot take about what’s going on here. 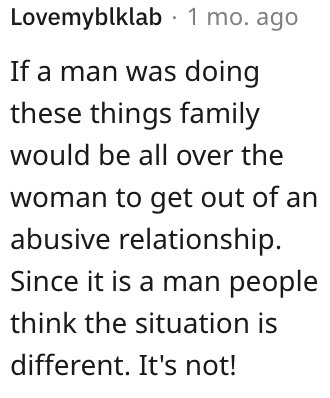