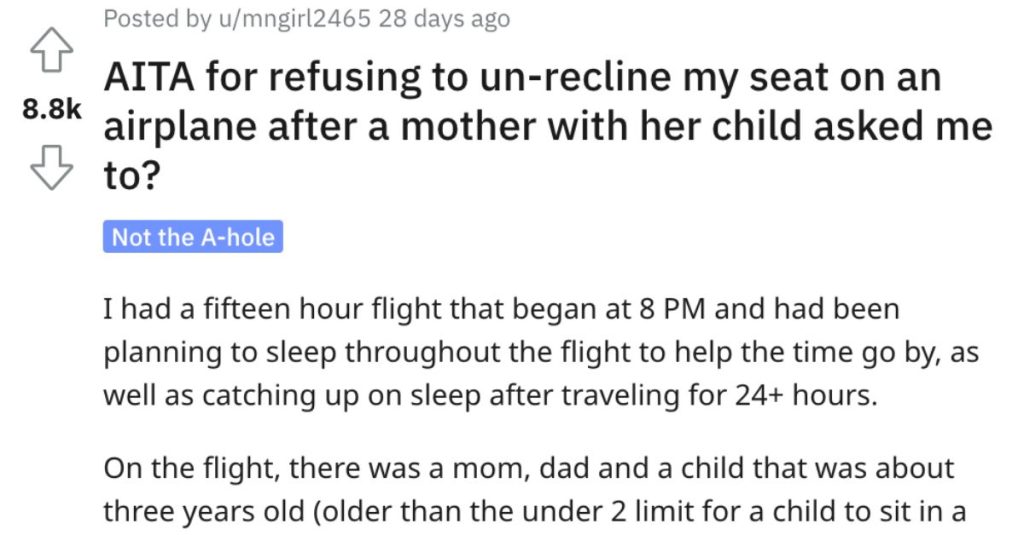 Is This Woman a Jerk for Refusing to Un-Recline Her Seat on a Plane? People Responded.

Don’t even get me started on people who don’t control their kids on airplanes.

It drives me absolutely insane!

So you better believe I’m rooting for this woman who had to deal with an unruly child and an annoying parent on a flight.

But get all the details for yourself so you can make up your own mind, okay?

Go ahead and dig in!

AITA for refusing to un-recline my seat on an airplane after a mother with her child asked me to?

“I had a fifteen hour flight that began at 8 PM and had been planning to sleep throughout the flight to help the time go by, as well as catching up on sleep after traveling for 24+ hours.

On the flight, there was a mom, dad and a child that was about three years old (older than the under 2 limit for a child to sit in a parents lap for free, for sure). Throughout the first two hours, the child kicked my husbands and my seat, stood up on their parents lap to grab my hair and pull on my shirt and shoving the papers in the back of the seat in between our seats, poking us with the papers.

Occasionally, I got a break from the child kicking me when she switched to her fathers lap, though at that time she began kicking my husbands seat. We remained quiet as we know it probably is difficult traveling with children.

Finally, when the child was sleeping, about four hours into the flight , I decided I, too, could rest. I reclined my chair, about three quarters of the way, not fully, but enough to be comfortable for my sleep.

But, since the child was larger than the normal under two years old for lap-sitting, it wasn’t as comfortable for the mother. Immediately, she tapped my shoulder asking me to move my chair up so she could be comfortable. And I’m sure having a child in your lap is not as pleasant, especially when they’re larger and on a long flight.

I, however, remained in the reclining position, as I felt that I had put up with her child making me uncomfortable for hours and preventing me from sleeping when I was in need of it.

However, in doing so, I made the mother more crammed in her seat, as she needed space for the both of them. AITA for refusing to move up my seat?”

One reader said she’s NTA and that a lot of parents out there are totally entitled.

Another Reddit user also said she’s NTA and that this sounds terrible for all parties involved.

This individual said she was more than patient and that these parents just aren’t doing a good job here. 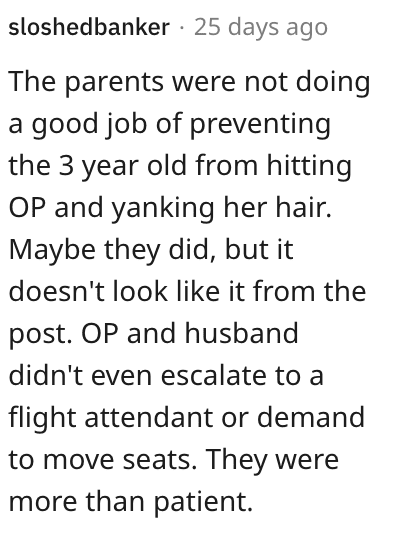