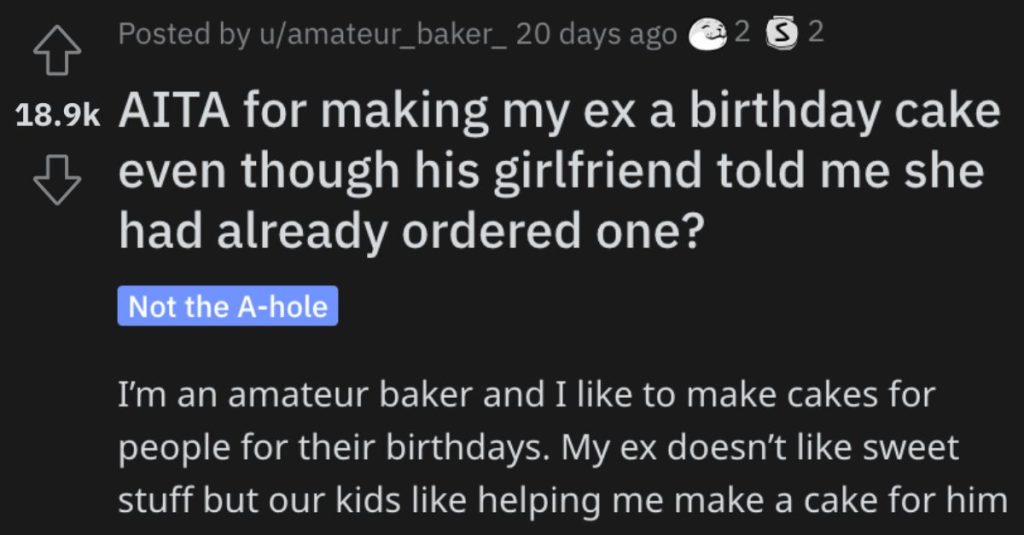 Is This Woman Wrong for Baking a Birthday Cake for Her Ex? Here’s What People Said.

And it makes me wonder, just how close are you really supposed to be to an ex?

Hmmm…let’s see what happened in this story from Reddit’s “Am I the A**hole?” page and please let us know what you think in the comments.

AITA for making my ex a birthday cake even though his girlfriend told me she had already ordered one?

“I’m an amateur baker and I like to make cakes for people for their birthdays. My ex doesn’t like sweet stuff but our kids like helping me make a cake for him so I normally make one for him anyway for their sakes.

This year his girlfriend planned a party for him and she told me she had already ordered him a cake so I didn’t need to make one. I told her that was fine but my daughter kept asking me when we would make her dad’s cake and was upset when I said we wouldn’t because she assumed I didn’t like my ex and that’s why I wouldn’t make him one.

Since the cake has always been more for the kids than for my ex, I decided to just make him a small one since it’s not like he eats cake anyway and I don’t want my kids to think I dislike their dad. I told his girlfriend beforehand that I was going to make a small cake and she told me not to and that I couldn’t bring it to the party.

I told her I had to bring it to the party as that’s when the kids would give him his gifts. I offered to come early and give it to him before the other guests arrived and then they could put it away and nobody else would know about my cake but she didn’t agree with me and repeatedly told me not to bring it.

I did take it with me in the end and now she keeps complaining to mutual friends that I did it on purpose to ruin the party and calling me weird for making him a cake after I was told not to.

This person said ex’s new girlfriend’s behavior is full of red flags and that this woman is NTA. 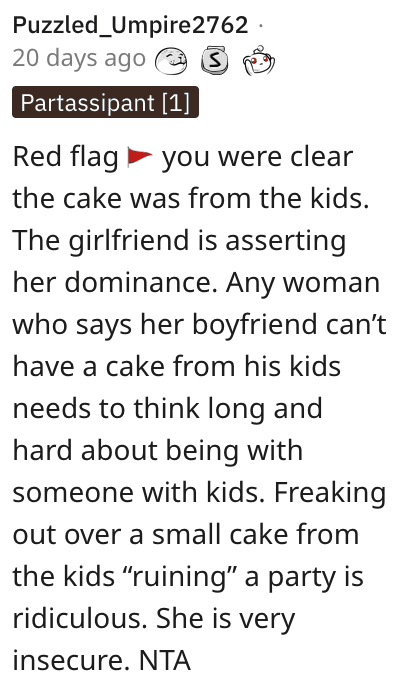 Another reader made a good point about this situation… 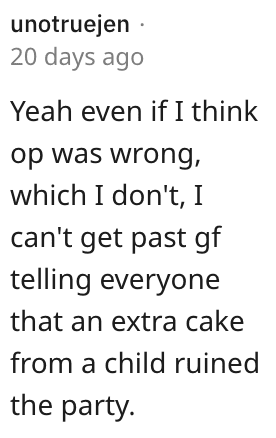 And this individual said it sounds like the new GF is pretty insecure about this whole thing.