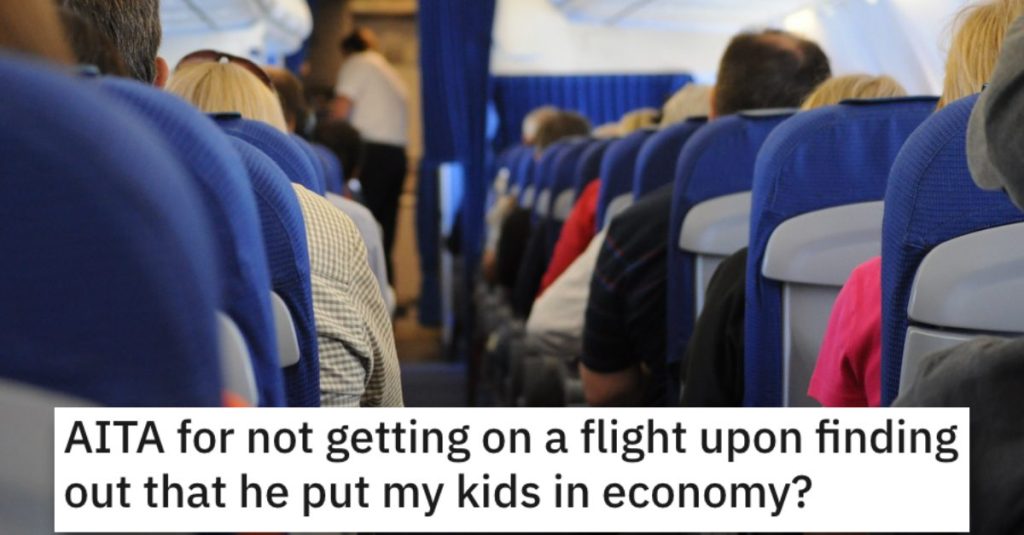 Is This Woman Wrong for Not Getting on a Flight Because Her Fiance Put Her Kids in Economy Class? People Responded.

How dare you book my children in economy class?!?!

I can’t say that I’ve ever heard anyone actually say that before, but you just never know what you’re gonna get on Reddit’s “Am I the A**hole?” page.

Take a look at her story and let us know what you think in the comments.

AITA for not getting on a flight upon finding out that he put my kids in economy?

I quit my job to start focusing on getting my degree. He’s become the “breadwinner” if you will although I still contribute with my savings! I also do 80% of child-care and chores.

Long story short, He wanted me and my kids to attend thanksgiving with his family who are located across country and we were supposed to go yesterday (ahead of time to get a rental place). He booked our tickets and everything but later, before the flight I found out that he, his kids and myself were put in 1st class whilst my 2 kids (14) & (10) were put in economy.

I was stunned, he acted like it was a no big deal and told us it’s just few hours and the kids could “just hang in there for a little while”. I asked how he could think this was acceptable and he got mad and said he’s the one paying for tickets then we go by his rules. I immediately turned around and took the kids and made my way out of the airport.

He started following us screaming at me to go back but I refused and told him that I no longer felt like spending thanksgiving with his folks after this. My youngest cried because she never flew without me.

He went with his kids. My and the kids are home. He has not stop calling trying to berate me and even had his mom text that I needed to get over myself and stop teaching my kids to be spoiled and entitled.

She said that the fact that I was “willing” to miss thanksgiving with the family over something so trivial shows my real character and perseonality and mindset or “lack thereof”. I have not replied but I feel horrible.

AITA, should I have just let it slide and just went?

In case I wasn’t clear, ME AND THE KIDS LEFT OUR FAMILY/HOMETOWN SO WE COULD GO CELEBRATE WITH HIS FAMILY IN HIS HOMETOWN.

My kids weren’t too excited leaving their grandparents for a week or so.”

This reader said she’s NTA and that this incident is a bad sign for the future. 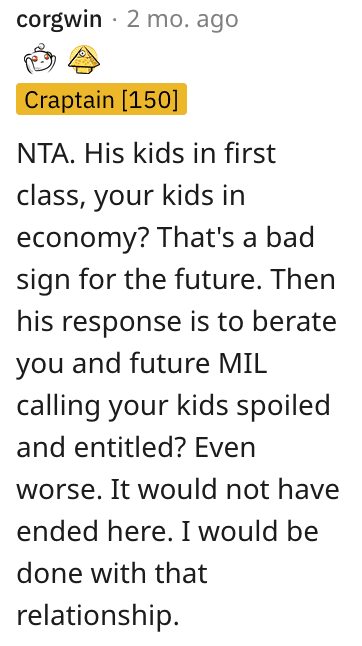 And another individual said she did the right thing and that her kids come first.

And one Reddit user said he knew this was wrong and he did it anyway.