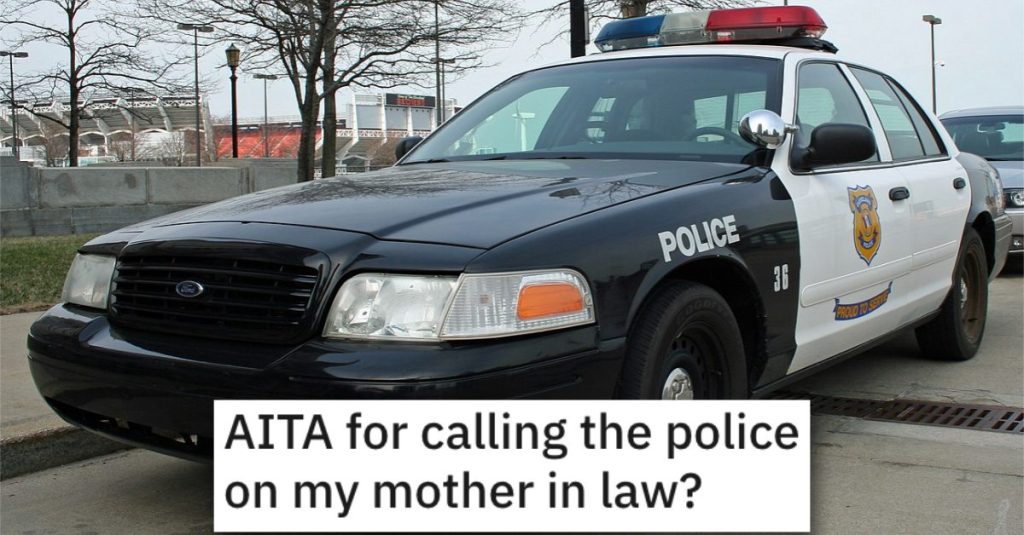 She Called the Police on Her Mother-In-Law. Did She Go Too Far?

Just like the one you’re about to read from a woman who called the cops on her mother-in-law.

Check out what she had to say below and let us know if you think she acted like an a**hole.

AITA for calling the police on my mother-in-law?

We got engaged about a year ago and when I got engaged my mother gave me a pair of earrings which she said every woman for generations in our family has worn to their weddings. They are 4.00ct dangling earrings and they are worth a lot. I felt very honoured to be given them and it made me feel closer to my grandmother who had d**d 2 months prior.

About 3 months after that I went wedding dress shopping with my mother my sister and my fiancés mother. I brought all the jewellery that I would be wearing to my wedding to see how they match the dresses.

When I put the jewellery on my mother in law kept going on about how gorgeous the earrings were. My mother explained the story and how they were a family heirloom passed down generations. I found the dress of my dreams and bought it.

On the day of my wedding i had everything ready in my room. My wedding dress, my flowers, my shoes, my makeup and my jewellery. I was in there with my soon to be mother in law. I then needed to go to the toilet and when I came back my mother in law was gone.

I wasn’t sure what had happened but i just thought she maybe got called away to do something. I then noticed my earrings were gone. I knew straight away that she had taken them.

The police arrived and searched her and the earrings were found in her bag. They were returned to me and they asked if I wanted to press charges. I wanted to talk to my fiancé first and he said he would support me if I wanted to. I didn’t want to decide in that moment so I just ignored it and had a great night.

That was a week ago and ever since then i’ve been getting loads of threatening messages and calls from my husbands side for the family. My mother in law has been sending me extremely h**eful texts and I think I want to press charges but I’m still not sure if it’s a good idea.”

Now let’s see how Reddit users reacted to this.

This person said she’s NTA and that her MIL is a thief. 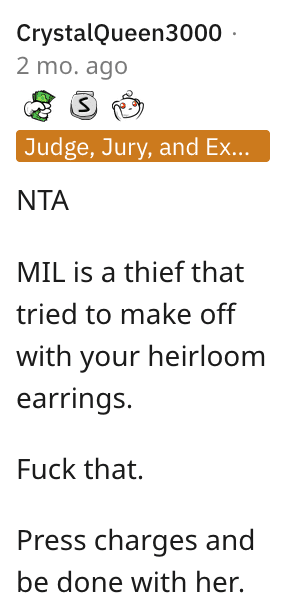 Another person said she needs to press charges against her MIL for theft and harassment. 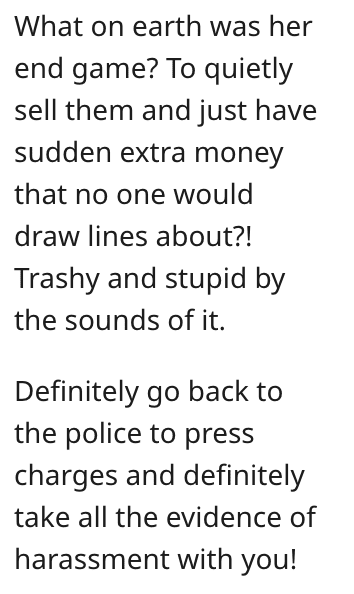