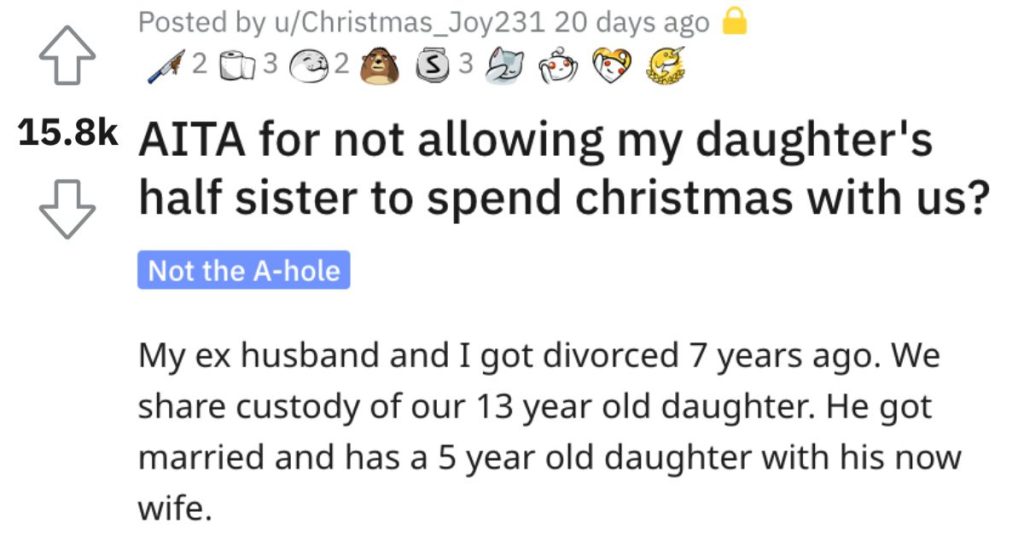 Is This Woman Wrong for Not Letting Her Daughter’s Half-Sister Spend Christmas With Them? People Responded.

Christmas is supposed to be the season of hope, love, and giving, right?

Well, maybe not all the time…

Check out this story from Reddit’s “Am I the A**hole?” page and see if you think this woman is out of line for not letting a certain someone spend Christmas with her family.

AITA for not allowing my daughter’s half sister to spend Christmas with us?

His daughter would spend time with my daughter regularly. They adore each other but she doesn’t come to my house and they rarely meet up there.

His wife has been diagnosed with cancer and has started treatment recently. The other day he came to drop our daughter off and asked to speak to me. He talked about his wife’s circumstances then how his family won’t be able to have a christmas celebration this year.

He said it wasn’t fair for his daughter and asked if I could “include” her in my family’s celebration. He pointed out how the girls will have a great time together bonding and making memories, but I said I was sorry but my family’s traditional celebration is a sacred thing and I do not feel comfortable including anyone else.

Plus it’d be awkward having her in my home. He said that his daughter may not be family to me but she sure is to her half sister. He asked me to stop and “think” about what’s best for the kids here.

I suggested he take his daughter to spend christmas with her grandparents (he said his parents and him are NC) and tried to cut the conversation short but he stopped me and started going on about how cruel it was for me to decline to include his daughter who’s already having a hard time adjusting.

I saw that he was beginning to cry so I stepped back and said I was no longer feeling comfortable having this conversation. I asked him to leave and he did but still texted me asking me to agree to let his daughter come spend christmas even offered that he stays away if that’ll make me less uncomfortable, I said no and now he’s calling me selfish and unfeeling.”

One reader said she’s NTA but that her ex-husband sure is. 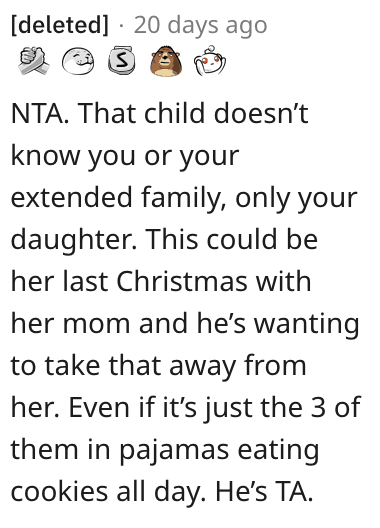 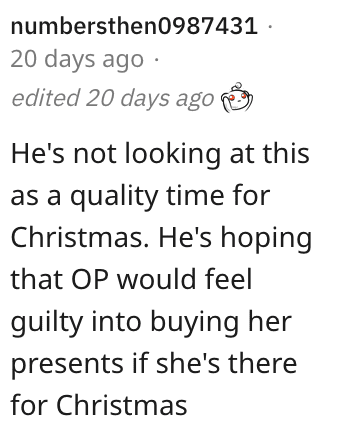 And this individual said that perhaps her ex was just trying to get his daughter away from what’s going on in her own home.