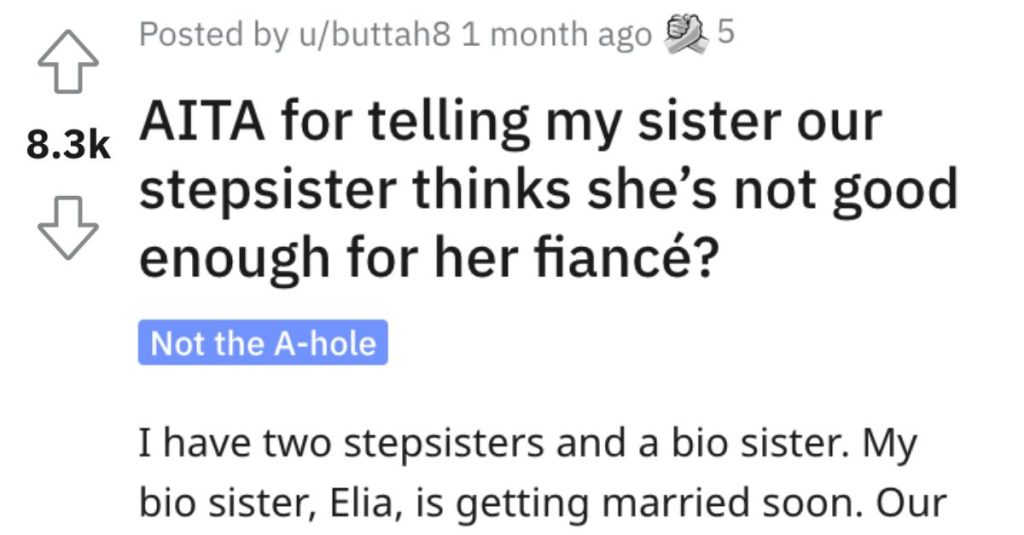 She Spilled a Secret About Her Stepsister and Her Fiancée. Did She Go Too Far?

We’d all like to think that when we tell someone a secret, they’re not gonna spill the beans…but you know how people are!

They can’t seem to keep their mouths shut!

And this woman wants to know if she’s an a**hole for spilling the beans about her stepsister.

Let’s take a look at what happened here.

AITA for telling my sister our stepsister thinks she’s not good enough for her fiancée?

“I have two stepsisters and a bio sister. My bio sister, Elia, is getting married soon. Our oldest stepsister, Hannah, hadn’t met Elia’s fiancé until this recent incident as she lives in Dubai and we live in London.

Elia’s future in-laws hosted an engagement party for them which Hannah came here for. Elia introduced her fiancé to Hannah but then had to leave as her fiancé wanted to introduce her to the other guests. After she left, Hannah kept asking us if that was really Elia’s fiancé.

My other stepsister kept saying “I know”. Hannah kept cracking jokes about how Elia managed to trick him into dating her and how they didn’t match as a couple. At one point she said she would’ve thought he would want somebody more at his and his family’s level.

At first, I wasn’t going to say anything to Elia since I know it would just upset her and Hannah claimed to be joking but we’re all going to be bridesmaids and I know it’s going to come with some nice gifts and at least one free trip which I don’t think Hannah deserves after what she said.

I told Elia and she was really upset that she started crying. Her fiancé saw and now he doesn’t want either of my stepsisters at the wedding and has uninvited them from all pre-wedding activities.

This has caused a lot of drama in my family and my stepsisters and stepdad are really angry at me. My mum told me that sometimes it’s best not to say anything, especially since I’ve made Elia feel so insecure that she’s trying to convince her fiancé that they should just have a small courthouse wedding.

Let’s see what folks said about this on AskReddit.

One reader said she’s NTA on any level.

And this Reddit user had something to say about her mom…

And another individual said that staying silent in situations like this is being complicit.