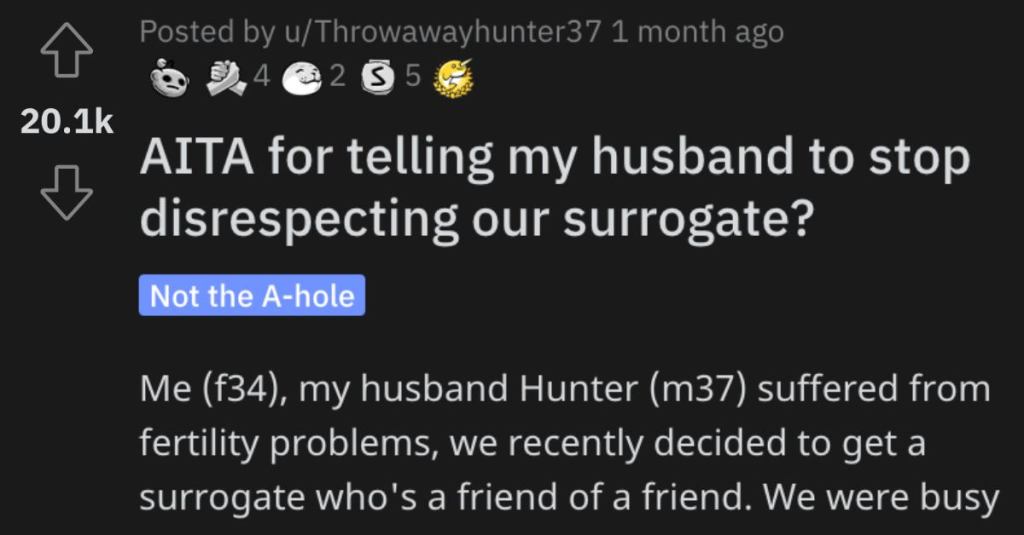 Is This Woman Wrong for Telling Her Husband to Stop Disrespecting Their Surrogate? People Responded.

That’s gotta be a tricky situation when couples deal with a surrogate.

A lot of raw emotions and feelings going on at all times…which is understandable.

And a woman took to the “Am I the A**hole?” page on Reddit to ask if she’s wrong for calling out their husband about his behavior toward their surrogate.

AITA for telling my husband to stop disrespecting our surrogate?

“Me (f34), my husband Hunter (m37) suffered from fertility problems, we recently decided to get a surrogate who’s a friend of a friend.

We were busy getting everything done legally, we already had a contract in place. My egg was used so no worries in this regard, plus our surrogate is a respectful, kind woman who’s been keeping her part of the contract in tact, but it’s Hunter who’s starting to act strange.

I’ve noticed that he’s been focusing his all attention on our surrogate like skipping work to visit her or get her things she didn’t ask for, chat with her all the time on social media and also constantly offering to do things for her like …. drive her places and sometimes even invite her out or offer to repair stuff for her.

She complained to me about this and even told me about things he’s been doing that I didn’t even know about, like bringing her gifts. I tried speaking to him about what this looks like but he said that he’s doing what he’s doing for his son and not her, still I asked that he tone it down and respect the woman’s space.

He got mad at me and accused me of being jealous of the woman who’s carrying my own child and said that this makes me look bad. I said our surrogate was the one who complained about his behavior and he said that this wasn’t true. Apparently this made him somewhat angry so I gave him time to cool down a bit.

Yesterday, our surrogate called me saying that Hunter came over and told her guests to leave, I asked why and she said that he wanted to show her the 9k car he bought for her. I was shocked, she said she declined the car and asked him to leave but he started arguing with her about using public transportation and risking our baby’s wellbeing.

I was fuming I called him demanding he get home and he did eventually. Once he got back I picked up a fight with him and yelled at him saying that he’s been nothing but overstepping, disrespectful, and inappropriate towards our surrogate, again he explained the car wasn’t for her but to ensure that the baby is safe.

I told him to stop disrespecting the woman and stop using the baby as an excuse to stomp all over her boundaries. He ranted about how he was just trying to make this work and that I should do the same if not more, he even accused me of not loving our son as much he does but this isn’t the way and putting 9k for car without telling me? He left the house for a while then came back and refused to speak to me.

I might’ve been hard on him, he might’ve just been oblivious so I’m less sure seeing his reaction now.”

This person said the husband’s behavior is upsetting and it could be due to a couple of different things. 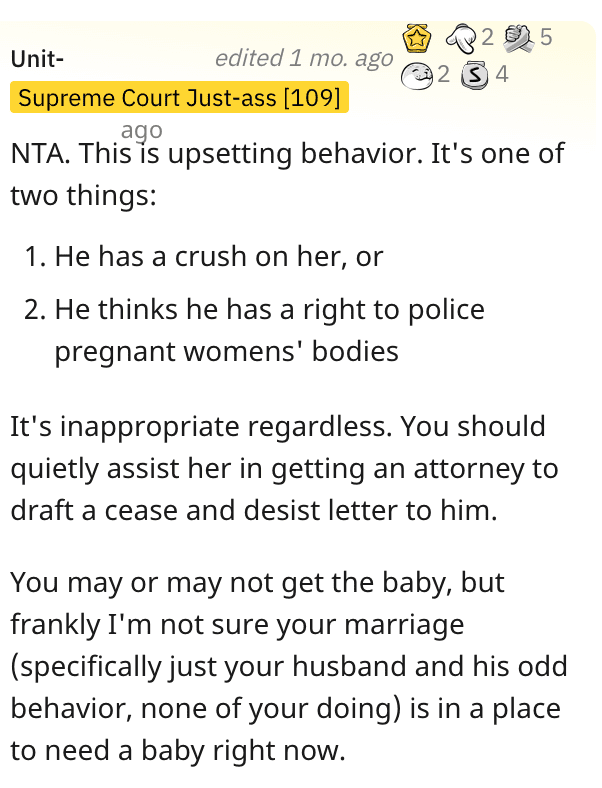 And this person said that they feel sorry for people who get stuck in these kinds of situations. 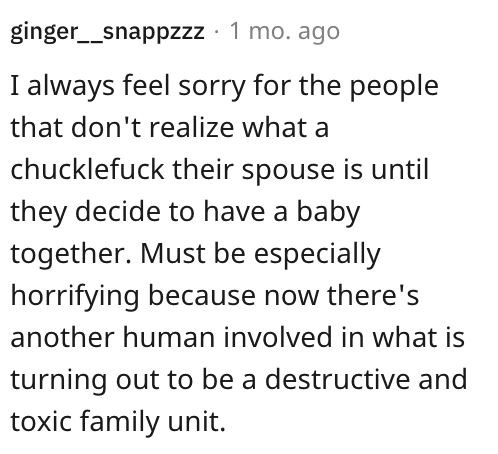 Another Reddit user said she might want to consider getting a restraining order against him for her and for the baby. 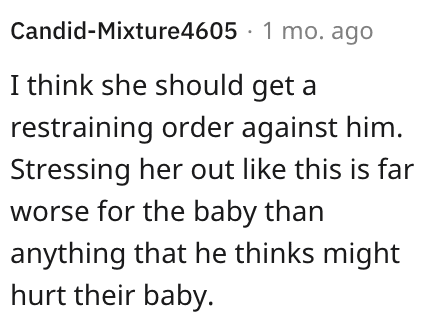