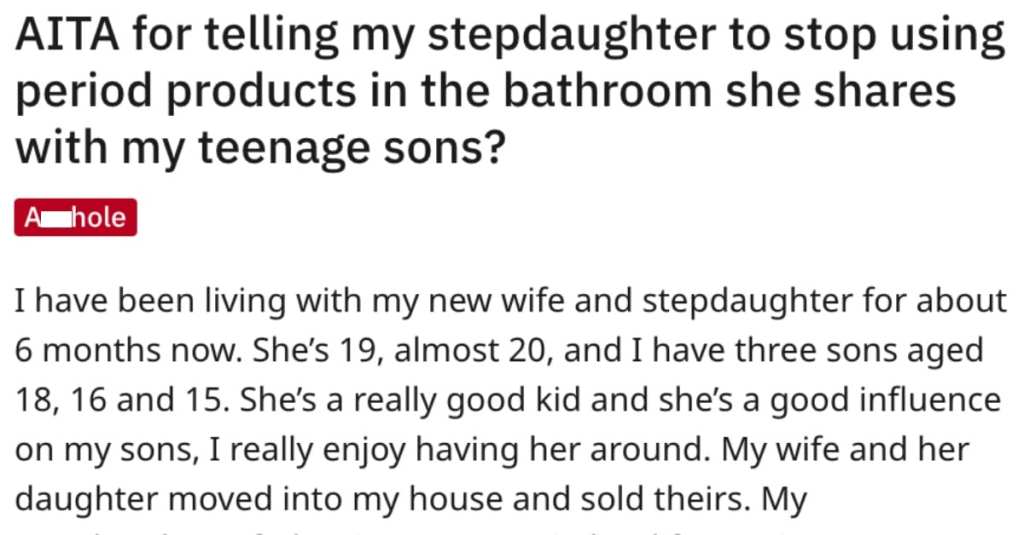 Man Ask if He Was Wrong for Telling Stepdaughter to Stop Using Period Products Because of Teenage Sons? Here’s What People Said.

This sounds like it could have been an episode of The Brady Bunch…but maybe a little bit later, like in the 1990s.

Combining families always leads to some tricky situations and here’s another example.

A man asked people on Reddit’s “Am I the *sshole?” page if he was wrong for having a conversation with his stepdaughter about a touchy subject.

AITA for telling my stepdaughter to stop using period products in the bathroom she shares with my teenage sons?

“I have been living with my new wife and stepdaughter for about 6 months now. She’s 19, almost 20, and I have three sons aged 18, 16 and 15. She’s a really good kid and she’s a good influence on my sons, I really enjoy having her around.

My wife and her daughter moved into my house and sold theirs. My stepdaughters father isn’t present in her life, nor is my sons’ mother. All four children share a bathroom.

My sons have never lived for a long period of time with a woman, nor have any of them had long term girlfriends. They had short visitation periods when they were younger but never longer than an hour, so living with two women has been unusual for them.

My eldest son, 18, came to me last week and told me that his stepsister disposes of her used sanitary products in the trash can they share, but doesn’t use toilet roll or sandwich bags to disguise what they are, and it makes him uncomfortable which I think is reasonable. My sons are teenage boys and don’t want to see their stepsisters period products on full display.

A few nights ago I went into the kitchen to grab a snack and she was there doing some work for university. My wife had mentioned that she knew she was on her period so I took it as an opportunity to have a word with her. I told her my sons were uncomfortable and asked her if she’d mind putting her used products in diaper bags or flushing them down the toilet.

She laughed and told me it was rich coming from a man who “sheds like a gorilla” and has produced “three skid marking sons” which I thought was just an unnecessary attack. I’ve been nothing but nice to the girl and it’s hardly a comparison. My sons shouldn’t be subjected to her unhygienic products if it makes them uncomfortable.

She went on to lecture me about how tampons can’t be flushed and that it’s bad for the environment if she uses diaper bags for every one which I think is just an excuse. I called her a scruff and told her that this was my house and that what I say goes.

I later asked my wife if she could have a word with her and she told me I was being ridiculous and that her daughter has had her period for ten years and knows what she’s doing. When I told her it was making my sons uncomfortable she said my sons needed to get a grip and turned over and went to sleep.

This is a genuine issue to me and she didn’t care enough to have a discussion about it. I asked my stepdaughter again in the morning and she did the same as her mother, completely dismissed it. Both of them have told me to stop being so silly but I don’t see how I’m being unreasonable when it makes my sons uncomfortable.

You know that the good folks of Reddit were going to have something to say about this!

This person said that the stepfather was an *sshole, no doubt about it. 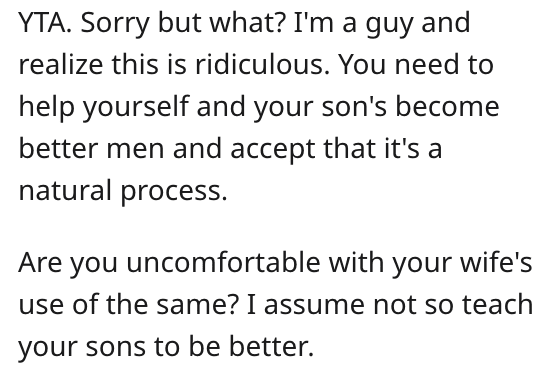 Another reader said that it’s up to the man to have a talk with his sons about menstruation. Plain and simple.

This individual said that this guy needs to get over it and do the right thing. Don’t be a jerk about it! 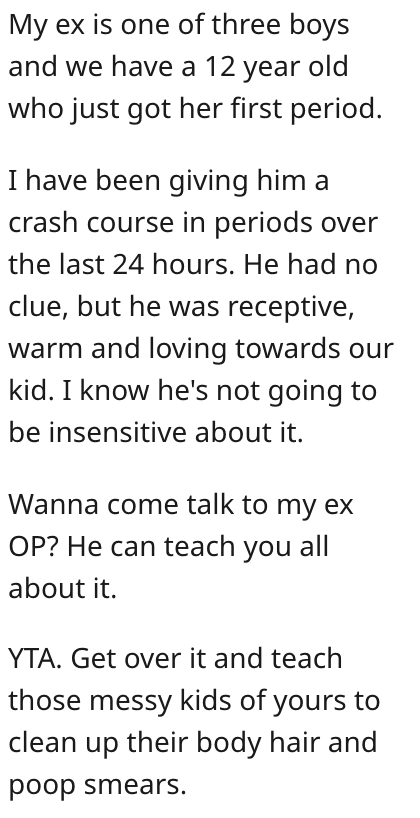 Another Reddit user remarked that the man’s behavior is definitely s*xist and that he should really be ashamed of himself. 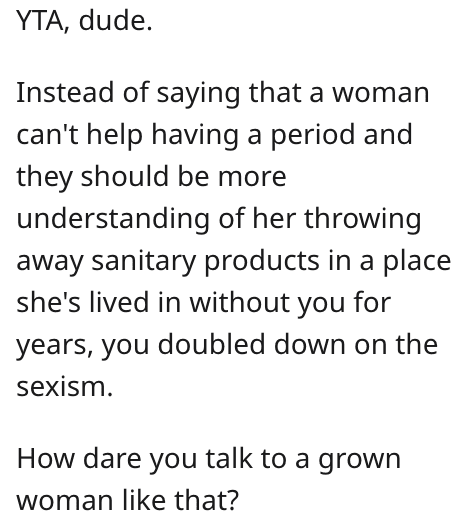 And finally, this reader said that this guy is definitely an *sshole and that it’s just a part of life. Get with the times, man! 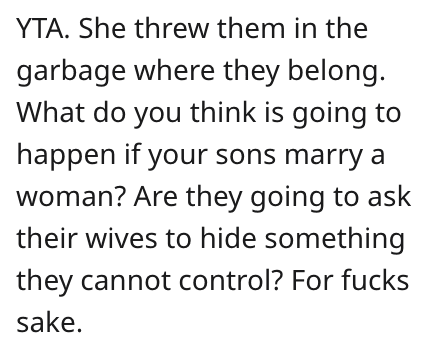 In the comments, tell us what you think about this father’s actions.

We can’t wait to get your take on the situation. Thanks a lot!