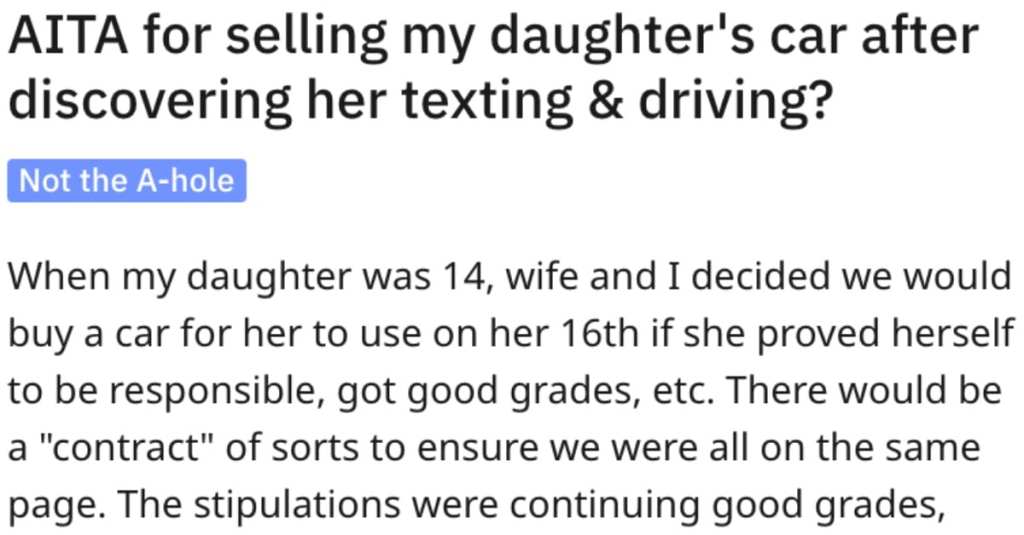 It really is frightening to read and hear about so many stories of horrible accidents that are caused by people texting and driving.

And I gotta say, if I had kids, I think I’d have a zero-tolerance policy when it came to my kids doing that. Young folks are not the greatest drivers in the world anyway and when you add texting into the mix…I think we can all agree that’s not a good thing.

So this father asked people on the “Am I the *sshole?” page on Reddit if they were wrong for punishing their daughter.

AITA for selling my daughter’s car after discovering her texting & driving?

“When my daughter was 14, wife and I decided we would buy a car for her to use on her 16th if she proved herself to be responsible, got good grades, etc.

There would be a “contract” of sorts to ensure we were all on the same page. The stipulations were continuing good grades, good attitude, she could only bring one friend with her somewhere (to begin with), we had to know where she was, and the obvious two: don’t drink & drive, and don’t text and drive.

We made it clear that we were buying the car, but it was for her to use. We got the car, a 2012 Honda Civic. She has a summer job right now, it’s summer break so she’s out doing stuff with her friends, etc. In a few months she will be off to college. Everything was going swimmingly.

Until someone on that NextDoor app started posting pictures and videos of bad drivers in the area. And lo and behold, my daughter was posted with her face down as she texted and rolled through a stop sign. Once with her face down in her phone at a stoplight. I was livid.

My wife was the one who showed it to me. We found out there were more instances (from her Instagram Stories) and we decided… no.

Wife and I up and sold the car. We didn’t lose very much in the process, except of course our daughter completely came unraveled. It’s so unfair, I didn’t hurt anyone, everyone’s doing it, how am I supposed to get to work, what about when I go to college?

Well, we said no, it’s not unfair, you hurt us by being a sh*tty, irresponsible driver, no, not everyone’s doing it, you can walk, ride your bike, or take the bus, and as for college, you don’t need the car to get to and from classes, and again, ride your bike or walk.

She tried to play the “how can you send your daughter to college without her safety in mind?” card and I said “Well, well, well, now you’re concerned about safety?” and she just up and screamed.

This has everyone in our life up in arms and divided. Her grandparents think we’re being over the top and awful, that grounding her would have sufficed. They’ve threatened that THEY will buy her a car again if we try to send her to college without one.

The car is already sold, so there’s no going back. I think what we did was absolutely correct, that actions have consequences and we would be in the wrong to pull back from that. In terms of her going to college?

Well, she made that choice. She had a car, it came with certain stipulations, she disobeyed us, and now she pays the price.

So what did the people on Reddit have to say about this…?

This individual said that this was an example of old-school discipline…and that’s a good thing. 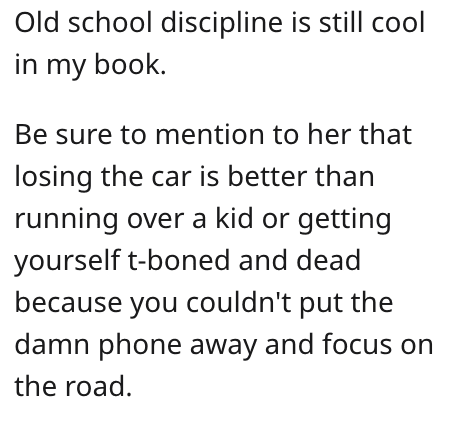 Another reader said that the punishment fits the crime and the father did exactly the right thing.

This reader said that the daughter’s sense of entitlement shows that she needed to be taught a serious lesson and that they did the right thing. 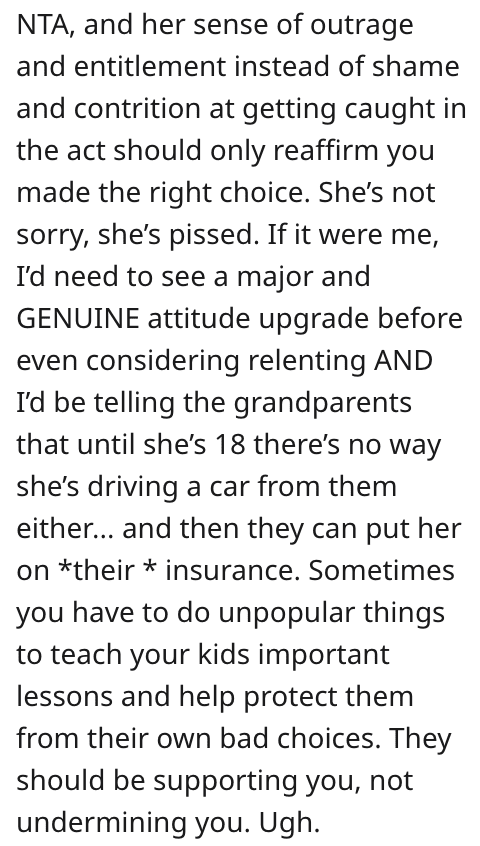 But, on the other hand, this Reddit user said that everyone in this situation is at fault and that the parents haven’t done anything to make their daughter a better driver. 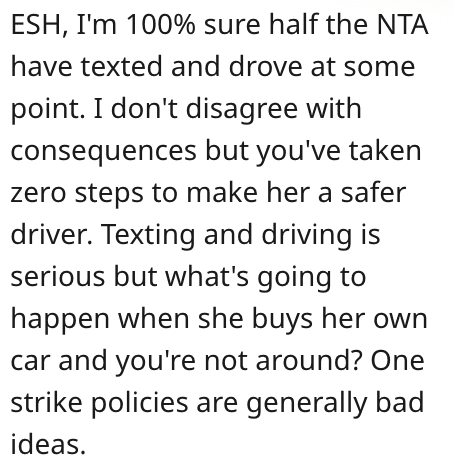 This person agreed that everyone is wrong here and that the parents missed a big opportunity to teach her a lesson. 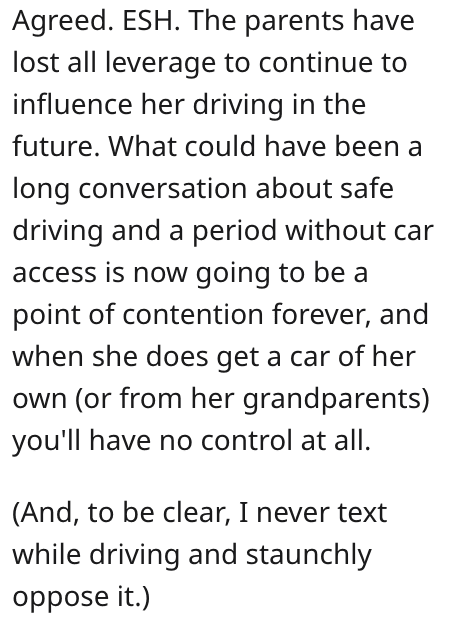 But this reader said that the father acted correctly and that the daughter will have to prove herself in order to get another car at some point. 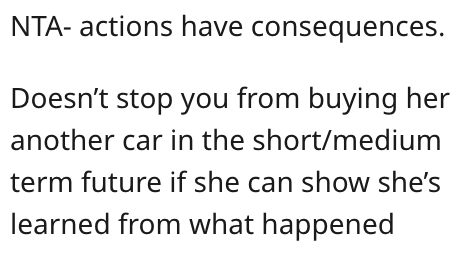 I know where I stand on this one…

But we want to hear what you have to say!

Talk to us in the comments and weigh in on this situation.