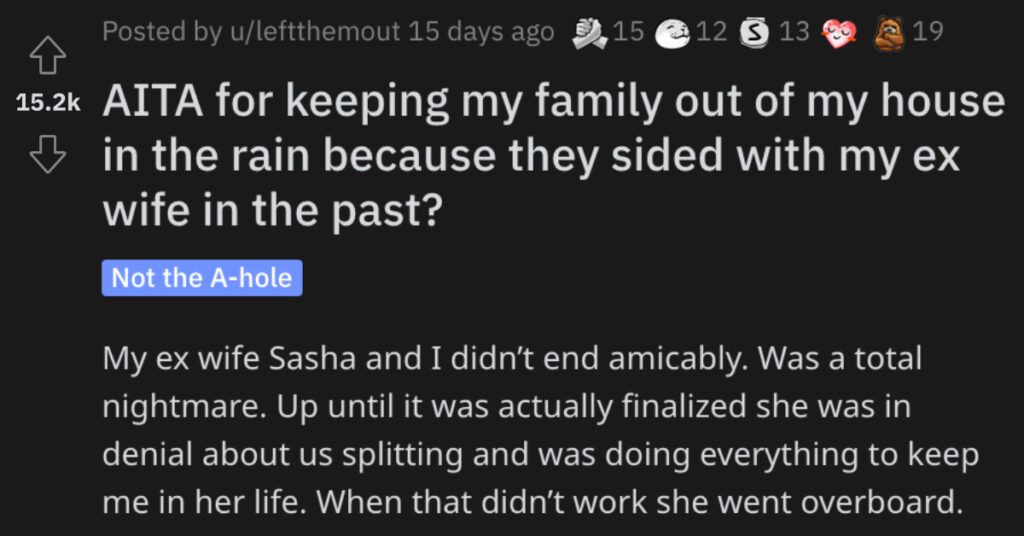 You’ll stay out in the rain and you’ll like it!

Well, that’s how some people probably react after they do something like this, but this man is having some second thoughts and wants to know if he acted like a jerk when he kept his family out of his house.

AITA for keeping my family out of my house in the rain because they sided with my ex wife in the past?

“My ex wife Sasha and I didn’t end amicably. Was a total nightmare.

Up until it was actually finalized she was in denial about us splitting and was doing everything to keep me in her life. When that didn’t work she went overboard. We were separated for 7 months before I filed for divorce. Only a few people knew about our status but she kept telling everyone we were still together and just trying to work it out (we weren’t but that was her lying).

The divorce dragged on for a while. Around this time I became friends with my current wife. Was almost like love at first site. We really hit it off and within 3 months after meeting we started casually dating. Sasha found out and spread the lie that I had been having an affair with my wife and that’s why I left her.

Then made up another lie that she was pregnant and I just left her and our unborn child for the other woman. This was totally bulls**t but my family ate it all up. They never even gave me the chance to say my side. Coincidentally she “miscarried” from the stress of the divorce and I was in even bigger monster to them.

Then they went for my wife too with calling her a homewrecker and many other horrible names. My wife was amazingly supportive through this and I tried to keep her out of it as much as I could. But in the end I cut my family out. For maybe about 3 years we haven’t spoken, my wife and I just had a boy 7 months ago. Don’t know how they did but apparently my brother managed to catch my ex in her lies. The truth has been trickling out and now they want contact.

Except I don’t want contact after how they acted and especially not the way they treated my wife. Without ever once believing me or giving me the chance to say my side. My mom, my sister and my dad came to our place and begged to talk. I refused to open the door so they were left outside. Coincidentally it started to drizzle a little over here but still I didn’t let them inside.

My brother believes I’m being an a**hole leaving them outside the way I did when their goal was to apologize. And I guess my mom said she felt humiliated and crushed. I told him that’s fine, I’m glad they finally saw the truth. In a way I saw their truth in how ugly they can be and even if they are remorseful now, my life has been happy and full without them.

Now it’s resorted into anger from him and my dad, thinking I’m being an immature a**hole for not even giving them the chance to come into my home. It seems wild to me that they’d go to making me out to be the bad guy, I don’t really know.

One reader said that the family obviously only got in touch with him to see his child. 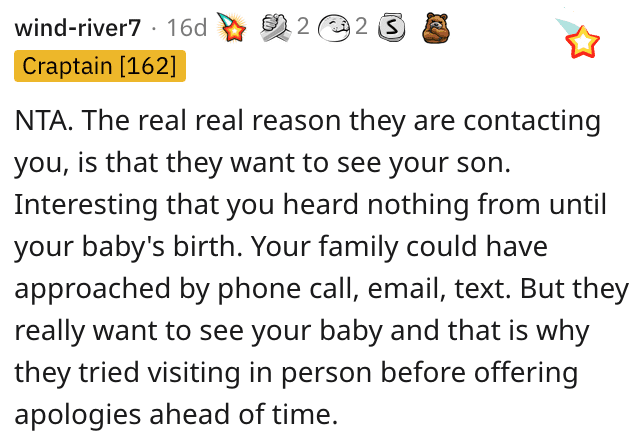 Another reader said that even though they’ve apologized, it doesn’t excuse what they did in the past. 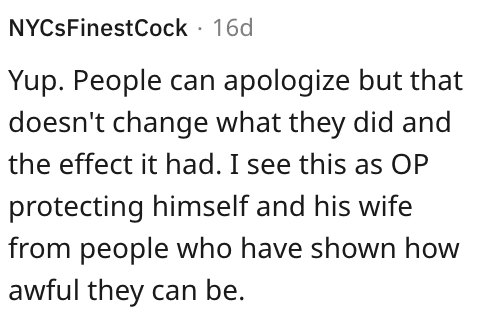 Another Reddit user this situation is totally and completely on the family. 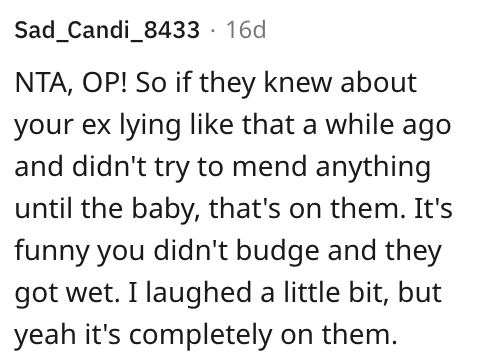 Finally, another reader said that even if they family members felt bad, they went about this whole thing the wrong way. 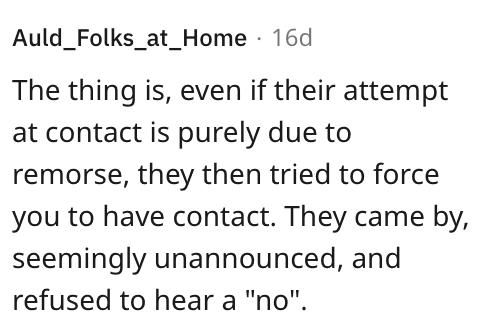 Or was he justified in what he did?