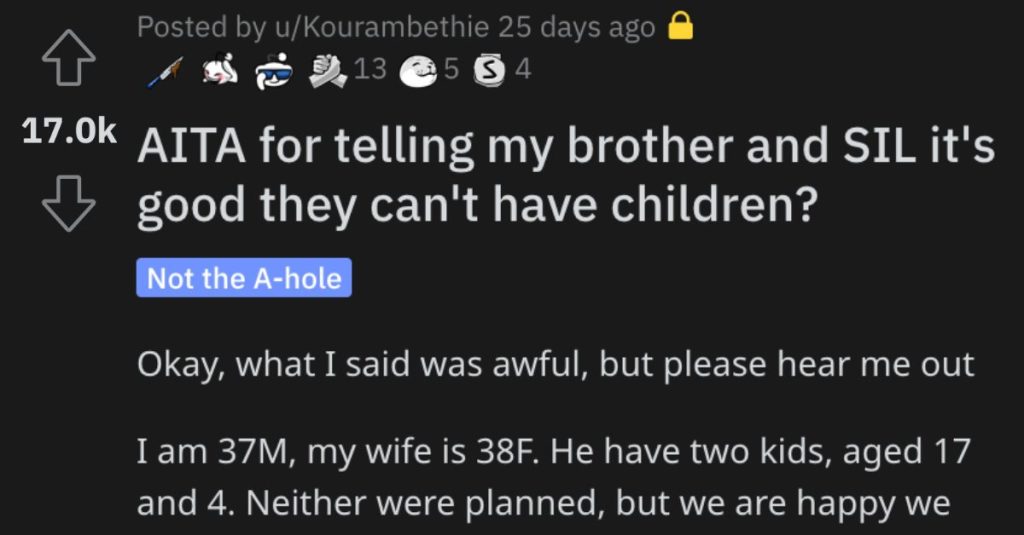 I know people say things they don’t mean in the heat of the moment sometimes, but certain things probably shouldn’t ever be spoken.

Read on to see what happened and if you think this guy acted like an a**hole.

AITA for telling my brother and SIL it’s good they can’t have children?

“Okay, what I said was awful, but please hear me out.

I am 37M, my wife is 38F. He have two kids, aged 17 and 4. Neither were planned, but we are happy we have them both. Our 17yro has cerebral palsy and is in a wheelchair. He can dress himself, he talks (a bit hard to understand at first, but you can understand him fine if you put a little effort into it), he does great in school and is a great great kid.

My brother and his wife can’t have kids. They have been through a lot of IVF and other treatments, but it hasn’t been successful. I know they are both devastated about it, especially my SIL.

We were all at my mother’s house for dinner the other night and brother and SIL were telling us about their last unsuccessful round of IVF and said that this might be it and they probably won’t try again. We all said we are sorry about that and that it must be awful.

Later that evening my mom was asking my 17yro about his plans for the future etc, how is school going, does he have a GF, does he like any girls etc (typical grandma stuff lol). My SIL then said “can he even date?” to me (my son didn’t hear it) and I looked at her and just said “what?”.

She then said “well he’ll be in your care forever, do you really want him to bring a woman into that”. I asked her to stop, but my brother said she’s just asking a question. At that point everyone heard us talking.

SIL then said to me and my wife “I didn’t mean to offend you, it’s just that a slow child might be too much work on their own, without dating at stuff”. I loudly replied “our son is not slow and you are WAY out of line here”.

She then said to me “relax, please, jeez I thought you had more patience, since you are raising a retarded child”.

I lost it and said “you know what, it’s a good thing you can’t have children because you would have been a terrible mother”.

She broke down crying, brother called me an AH.”

One reader said he’s definitely NTA for what he said. 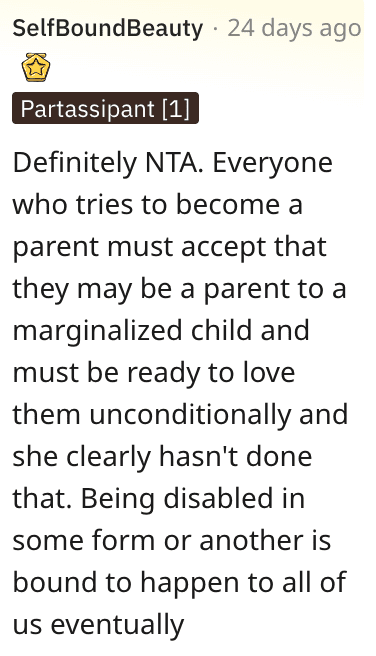 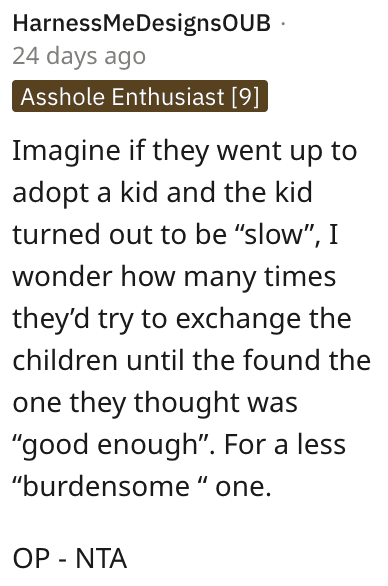 And another individual shared their own thoughts about why they DO NOT want to have children.