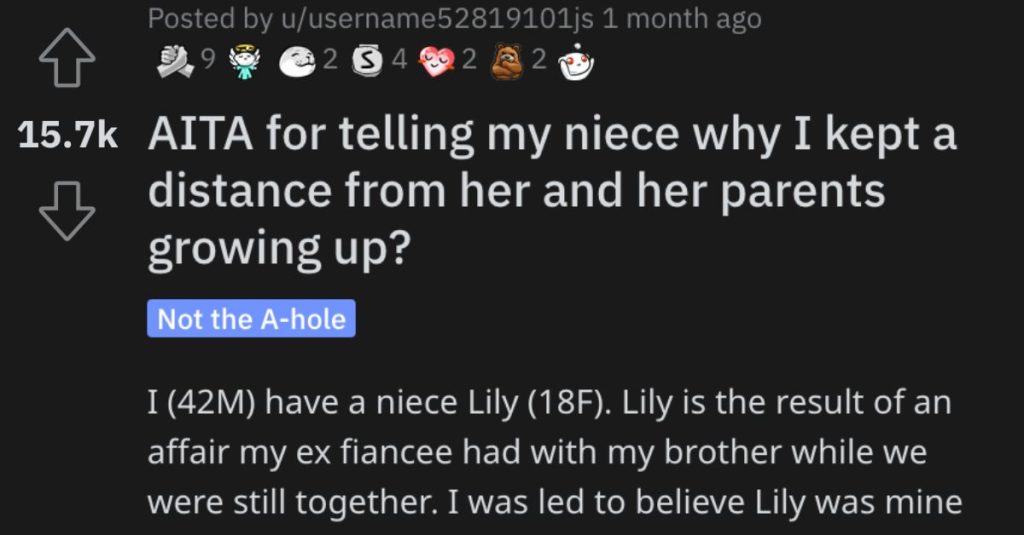 The truth can hurt…and it can really hurt when it comes to family issues that have been below the surface for a long time.

Take a look at this story and see if you think this man was wrong for laying some truth on his niece about her family.

AITA for telling my niece why I kept a distance from her and her parents growing up?

Lily is the result of an affair my ex fiancee had with my brother while we were still together. I was led to believe Lily was mine throughout the entire pregnancy and almost signed her birth certificate before my ex confessed out of guilt that Lily was probably my brothers. We did a DNA test and Lily wasn’t mine.

During my teens I got into an accident which left me infertile, the doctors said my chances of fathering a child were slim to nonexistent so you can imagine how crushed I felt when I discovered that not only I’m not going to be a father but I was also betrayed by 2 people I loved.

Its been years since and I did well for myself. I’m the first in my family to attend University and I landed a high paying job right after graduation, I own my own business, invest in property and since I’m both single and childless I can spend my income however I please.

My ex ended up marrying my brother, I’m somewhat cordial towards them but I can’t bring myself to fully forgive them for what they did. And although I know Lily is blameless whenever I see her I’m constantly reminded of how I was once overjoyed with holding her in the hospital thinking she was mine, so I can’t bare to look at her for too long.

I didn’t visit her growing up, didn’t take her on fun trips or give her lavish gifts like I did for the rest of my nieces and nephews. I wasn’t mean or h**eful to her but I will admit I kept my distance.

When my oldest nephew turned 18 I decided that I will pay for his college education since I could efford it while his parents couldn’t. I even rented him one of my apartments for cheap so he wouldn’t have to worry about money and could focus on getting his education. Since then I did the same thing for 2 of my other nieces.

Last week Lily approached me during a family event and inquired if I could pay for her education, I told her no. She then called me a jerk and asked why I was so distant towards her and her parents to the point where I couldn’t even do her the same favor I did for the rest of her cousins.

I told that her parents have enough money to afford her education and asked her how she could possibly expect me to be ok with watching my ex and brother who had an affair behind my back play happy family in front of me. After that Lily got quiet for the rest of the event and left early.

I later got a call from my ex yelling at me for ruining her family, apparently she and my brother didn’t bother telling Lily about what they did to me all those years ago and now she is knows she is so angry at them that she decided to go live with her bfs family.

I’m starting to feel guilty that I told her the truth since it affected her more than I thought it would, but at the same time she is grown enough to know the truth and I don’t think I could’ve lied to her face even if I wanted to.

This reader said he’s NTA but his family sure sounds like it. 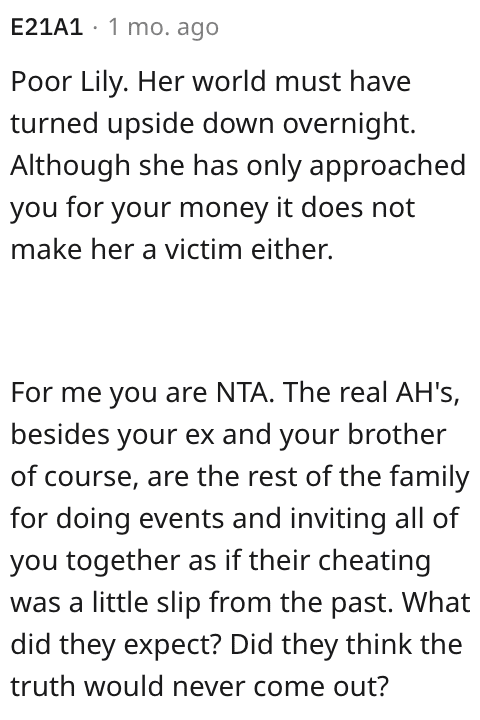 And this individual agreed he’s NTA but said that he should try to help out his niece if he can. 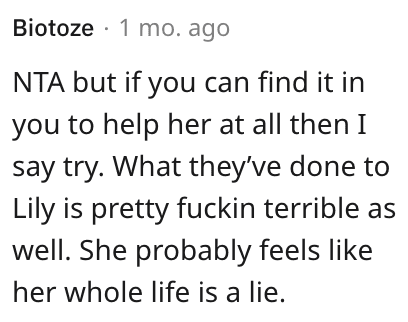 Another Reddit user said this family committed a double betrayal on him and his niece and that he’s NTA. 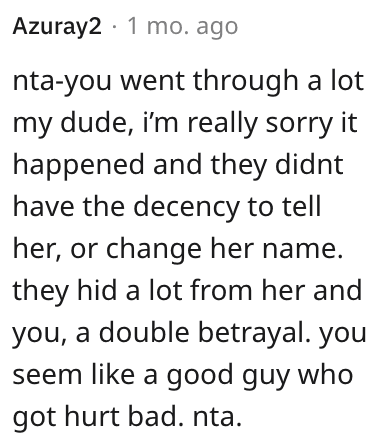