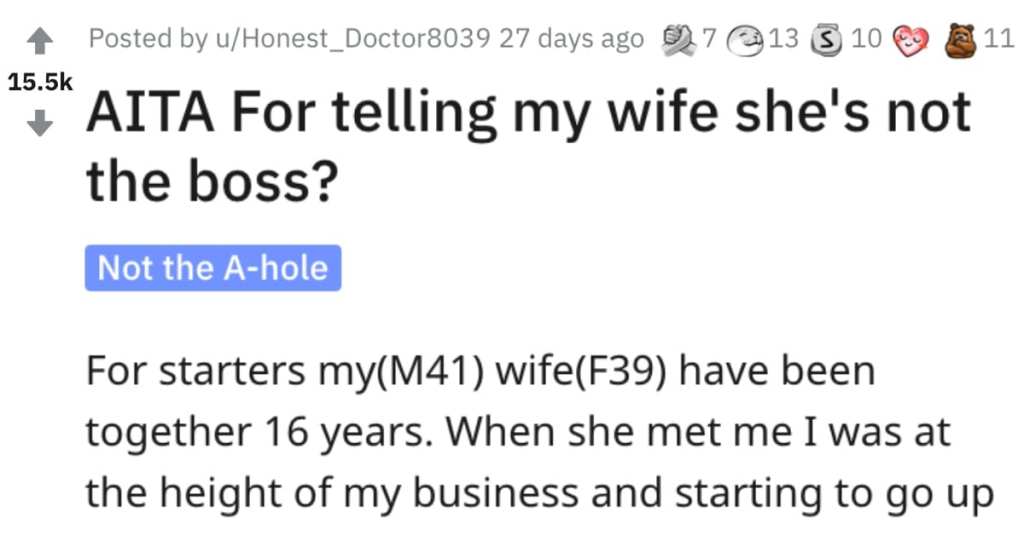 You’re not the boss of me!

You know whenever you hear that, things are gonna get ugly…

And that’s what happened when a guy took to Reddit’s “Am I the A**hole?” page to ask readers about an argument he got into with his wife.

AITA for telling my wife she’s not the boss?

“For starters my(M41) wife(F39) have been together 16 years. When she met me I was at the height of my business and starting to go up from there, even during the pandemic my business is still booming.

I had my own house(that I lived in by myself), a couple cars and a cottage although that is unrelated. I own my own factory refurbishing various re-engineered equipment, mostly HVAC stuff. About 3 years after we got married she decided she had enough of working odd jobs and making not-so-great money at it so she expressed she wanted to be a SAHW.

I had no problem with this, we don’t have kids and don’t plan on having any so I saw this as a win-win as she got to stay home, and I came home to a nice house. After 3 years of this she was tired of being a SAHW and wanted to re-join the workforce. Since she could really only find odd jobs I suggested she work at my shop.

I pretty much created a job for her doing small admin stuff, nothing crazy as I used to do all this myself plus work on the floor but this took a load off my shoulders; obviously she got paid a healthy wage for her work and I hired a cleaner to come in once a week to help us clean and maintain the house.

On to the problem: one of my workers accidentally order 20 of one part instead of 2. This was a bit of a big deal as now instead of being out a few hundred dollars I’m now out thousands. While I wasn’t royally pi**ed off this did put a large dent in my overhead so I had to offload these parts. Barely made my money back but that’s beside the point.

My wife however found out and absolutely BERATED this poor guy. I’ve had this guy work for me for over 10 years and his work is solid; he’s a hard working man, 2 kids, another on the way and he’s become my go-to guy for almost anything.

I didn’t hear any of the situation until I heard screaming from my wife that she was going to fire him and he cost her hours of re-work and budgeting etc…(this is simply not true as 2 phone calls and some editing on our books and everything would be right as rain, tops a 1 hour affair).

She and he finally filled me in and I told her to leave the room so I could talk to him. She refused; I asked again and once again she refused. I asked one more time and my worker was on the verge of tears and I yelled at her and told her “You’re not the boss, I am. I make these decisions, now LEAVE”.

I talked it over with him, we made amends as it was an honest mistake and he hasn’t had a screw-up like this since he started so I’m not concerned about it happening again.

My wife was livid and after yelling about his screw-up has refused to talk to me. I’m clearly in the dog-house here but I refuse to think I did anything wrong as she was, in my opinion, being needlessly unreasonable and on a power trip.

And here’s what folks on Reddit had to say about this story.

This reader said that the guy is not a jerk here and that his wife would be fired from any other job for pulling a stunt like this. 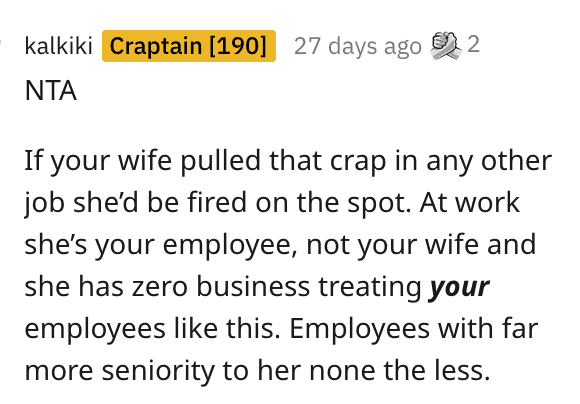 Another person argued that married bosses shouldn’t be bringing their problems and their drama into the workplace. Because you know what that leads to… 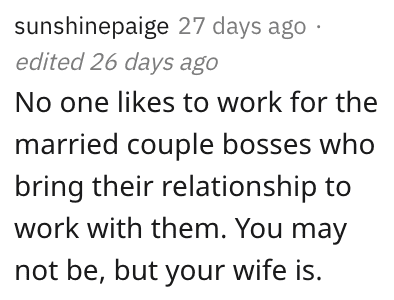 This person said that the man is in charge of this company and it’s up to him to lay down the lay. It’s NOT up to his wife. 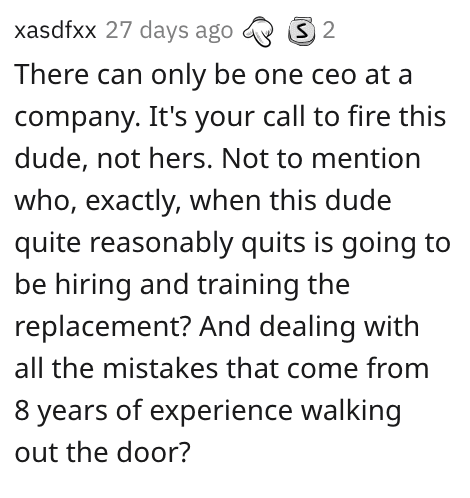 Finally, this person said that the man needs to do some more investigation because it’s likely that his wife has been bullying employees. 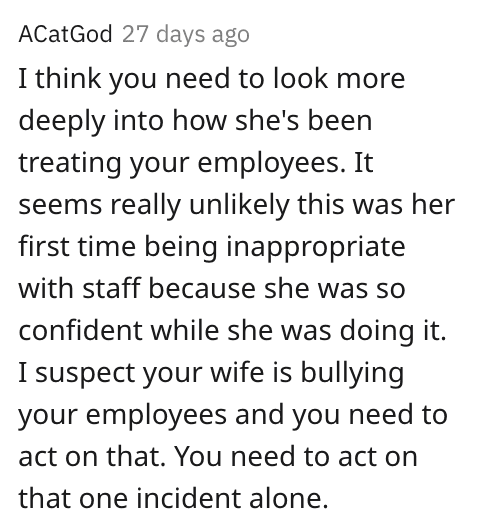 Was this guy a jerk or were his actions justified?