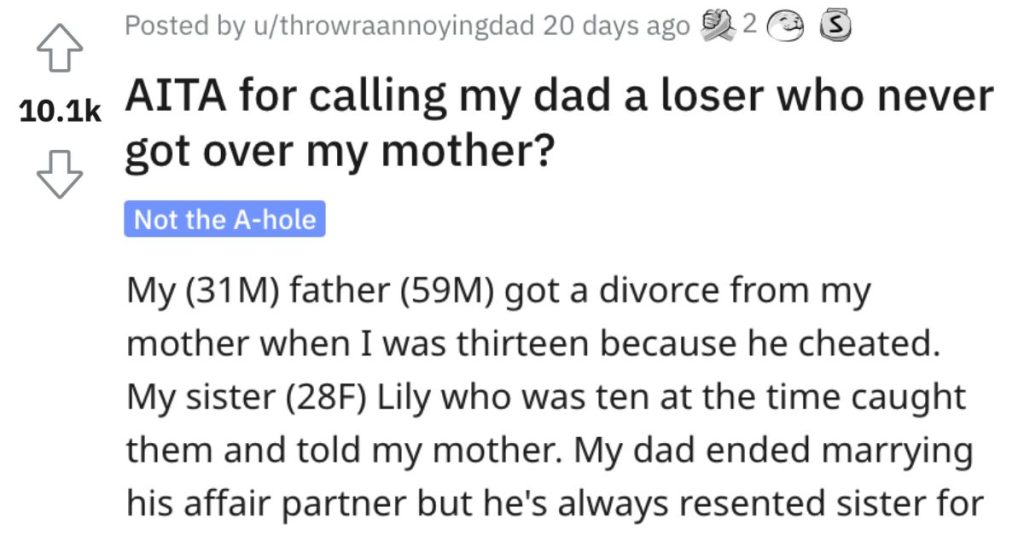 I know we all blow up at our family members once in a while, but to call your own dad a loser?

But did this guy go too far?

Check out what he had to say and let us know if you think he acted like an a**hole.

AITA for calling my dad a loser who never got over my mother?

“My (31M) father (59M) got a divorce from my mother when I was thirteen because he cheated.

My sister (28F) Lily who was ten at the time caught them and told my mother. My dad ended marrying his affair partner but he’s always resented sister for this. My mother never forgave him and she never spoke to him again outside of co-parenting.

My dad felt as though he owned my mother and he caused a lot of problems when she remarried and was able to have a child with my stepfather when she suffered many miscarriages with my dad. He gets visibly very moody when I talk about my stepfather, half sister from my mother or my step siblings.

Lily is also divorced from her ex-husband Daniel (32M) but they’re still close friends. They share some cats and constantly hang out together and Daniel still comes to our family events sometimes because Lily feels safer with him around. They’re both autistic so I think they don’t want to bother finding someone else to be close to. They don’t live together anymore but spends most of their free time together.

My dad constantly mocks Lily for hanging out with her ex. He alternates between saying Daniel is a loser and not good enough for her, calling her a loser for ‘not getting over him’ or trying to convince her to date one of his friend’s sons. Lily gets very overwhelmed but she likes to handle things on her own so she tells him to leave her alone.

However, at a recent family function, my dad decided to taunt her in front of everyone. He was speaking our native language so Daniel didn’t understand, but he was mocking her for ‘being a desperate loser who still wasn’t over’ Daniel.

It was pretty vile and Lily became visibly upset. I had enough, so I said, in English, that he was a pathetic loser who never got over my mother and was taking his frustrations out on Lily for something she did as a child. I then said that he was jealous that Lily was able to have a good relationship with her ex-spouse because he wasn’t.

He was infuriated and we got into a massive argument. Daniel, Lily and I ended up leaving and a few cousins did too.

The whole family is split, most of the older generation are saying that I’m a disrespectful a**hole and I should’ve defended Lily without insulting my father. Our cousins say that I was right and he deserved every word I said. Lily is upset about the argument because it triggered her, but she says that what I said and did was right. Daniel has the same opinion as Lily.

One individual said this guy is NTA but that his dad sure sounds like one. 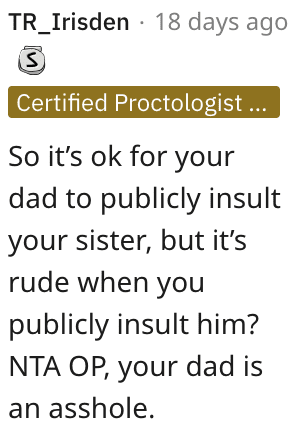 And this Reddit user also said he’s NTA and this whole “respect your elders” thing is BS. 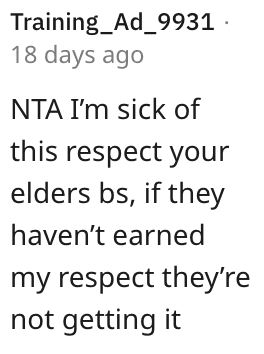 Another reader agreed and said this guy is definitely NTA. 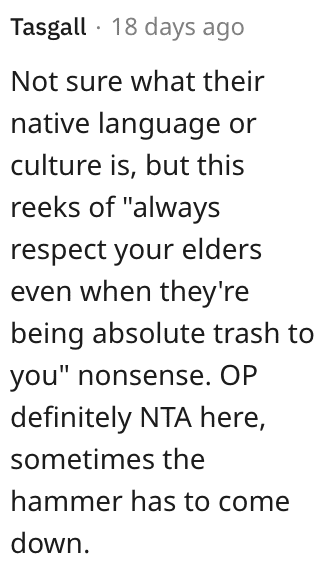