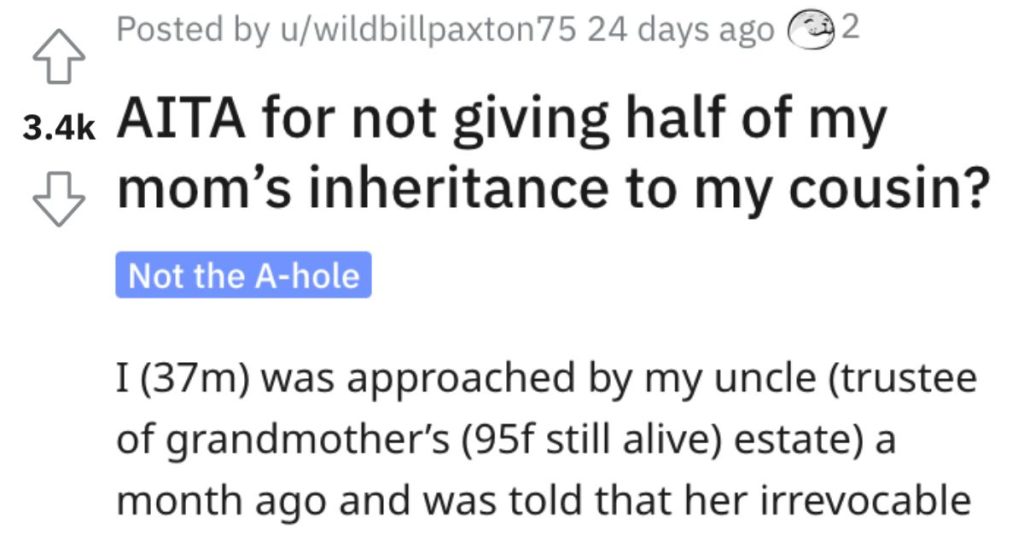 You know that anytime someone comes into some money, other folks are gonna come out of the woodwork and try to get a piece of the action.

But what are people supposed to do in those situations?

Check out this story and see if you think this guy handled this the right way.

AITA for not giving half of my mom’s inheritance to my cousin?

My grandmother pays the premium each year out of her estate. Now, sadly my mother d**d of cancer two years ago and per the rules of the ILIT, I have become the sole beneficiary of my mom’s portion $400,000.

When asked what money he will be giving to his son, my cousin, out of his portion of the $400,000, he said nothing, he will keep the full $400,000, because he is “the son of my grandmother.” If I were to agree, he would have me sign a contract saying I will give up $200,000. As legally, he cannot change the rules of the trust or me as a beneficiary.

My grandmother seems to have no knowledge of the trust being the source of the money, making it clear that my uncle has been coaching her and hiding the details of how the trust money is to be dispersed. To make matters personally worse, my grandmother recently asked if I wanted to be written out of the family because I’m being “greedy.”

I have also received a text from my aunt (uncle’s wife) saying that I’m a bad grandson and have no relationship with my grandmother, etc. All untrue. I love my grandmother dearly and want this to stop.

Now, another issue is that my uncle is saying that there will be no money in her estate (Will) at the time of her d**th due to her high cost of living and thus no money for me or my cousin will be available from her estate. This is why he wants my mom’s and my inheritance to be split up for his son, who he says will get nothing from my grandmother.

One person said he’s NTA and that he needs to get a lawyer. 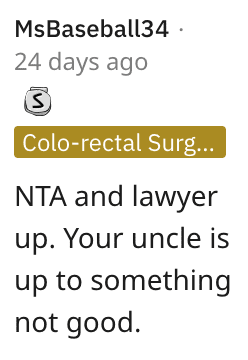 Another Reddit user said his uncle is manipulating his grandmother.

And this reader said that he needs to report what his uncle is doing ASAP. 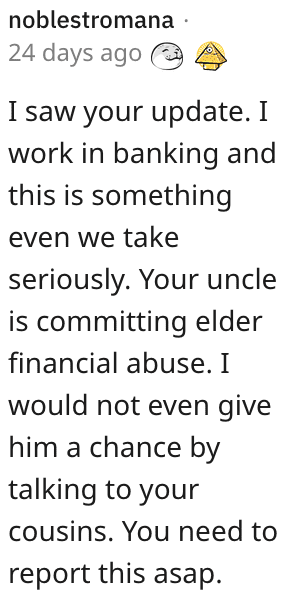