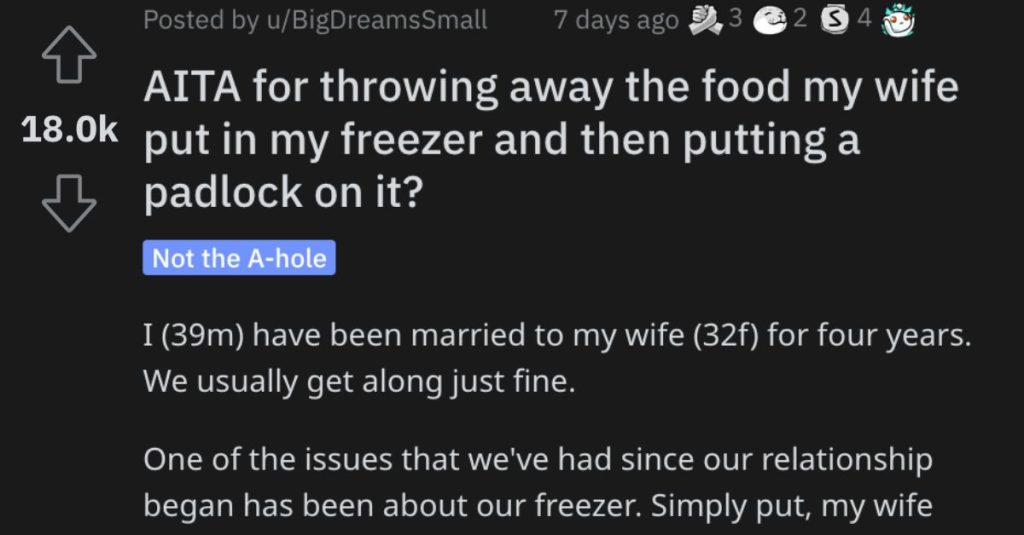 But let’s see what happened before we jump to any conclusions, okay?

AITA for throwing away the food my wife put in my freezer and then putting a padlock on it?

One of the issues that we’ve had since our relationship began has been about our freezer. Simply put, my wife stuffs the freezer full of food constantly. There is absolutely zero space for me to put anything in there.

At first, I tried to solve this by buying the fridge with the biggest freezer we could find. I dropped nearly $4 grand on it. She interpreted this as an invitation to buy more frozen food so she could play microwave dinner Tetris with the freezer. Every single nook and cranny is stuffed full. She still buys frozen foods and somehow finds a way to fit them in.

The worst part is when I buy a frozen food or freeze something for meal prep, she asks me at least three to four times a day when I’m going to take it out of the freezer. She essentially nags me until I remove the food from the freezer so she can put something she won’t be touching for six months in in its place.

Last weekend I finally snapped and bought an inexpensive single door deep freezer. I put it in the basement near the washer/dryer and put a couple of my own things in there–mostly some frozen veggies and a few burritos. I didn’t really mention it to my wife because she wasn’t home when I brought it in.

When my wife got home later in the day, she went downstairs to do laundry and discovered my freezer. She excitedly ran upstairs to tell me that the upstairs one is full and she can actually fit more food in there now. I responded that under no circumstances is she to touch the freezer because it’s mine.

Not a single ice cube should be put in there. Then I told her to not even ask (because I knew she’d mention 3-4 times a day that she needs more freezer room). She sulked and tried to debate the issue, but I was able to placate her.

A couple of days later I went down to the basement to get something from my freezer, and there I found it about 70% full of microwave dinners. Upon checking the freezer in the kitchen, I found that it too was still completely fully. I calmly went downstairs with a large garbage bag, threw everything into it, and then tossed it into our trash bin. Then I found a padlock I had lying around and locked it with a chain.

Later that day my wife brought more frozen food to put into the new freezer, but when she got downstairs she noticed the lock and flipped her lid. She told me I was being controlling. When I told her that there’s no way she will ever use that freezer again, she threw something like a tantrum and left for her mom’s house. She came back later that day and told me that I had 24 hours to unlock the freezer.

Nothing really happened after those 24 hours, but now she’s completely ignoring everything I say. I think my actions were justifiable, but was I wrong here?”

This person said this guy is NTA and his wife sounds like she has some serious problems she needs to work on. 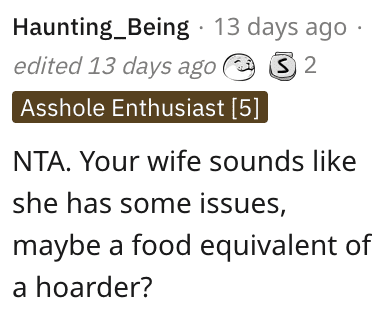 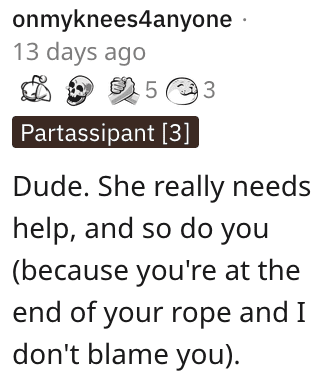 And this individual suggested couples’ counseling might be in order. 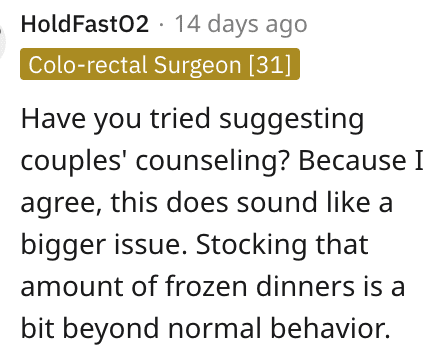