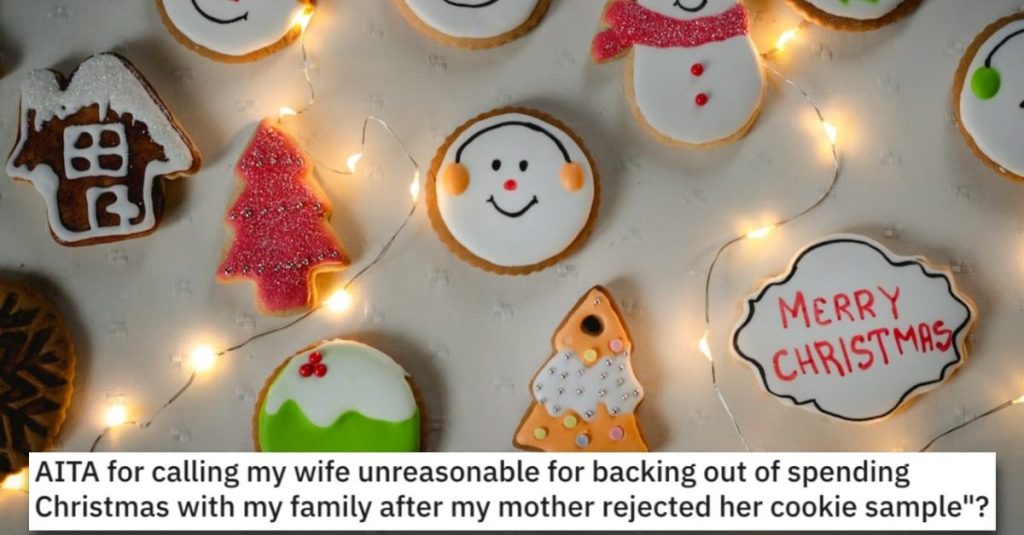 If you back out of any plans, you’re bound to get some blowback.

And if you back out of Christmas plans? Expect it to be much worse!

So is this guy a jerk for telling his wife she’s being unreasonable about backing out of Christmas plans?

Check out his story and tell us what you think in the comments.

AITA for calling my wife unreasonable for backing out of spending Christmas with my family after my mother rejected her cookie sample”?

“Context: For every holiday, My mother would ask the women in the family (my sisters, sister in-law, my wife, my female cousins) to send “samples” of the desserts they plan to bring to the celebration for testing and to see if these desserts could make it to the “food menu”.

My wife has been complaining about my mother deliberately rejecting every dessert sample she sent. So many times my mother has told her that she’s being honest and keeping the guests best interest at heart. Yet my wife still thought that my mother is deliberately excluding her since 2 of her dessert samples were rejected before.

For this year’s Christmas my mother is doing the same thing but this time, she told every woman who are participating to make a “cookie sample” and send it to her for testing. My wife took it as a challenge and to be honest she worked really hard to make a good sample and sent it to my mother days ago and the results just came in yesterday.

I came home from work and found my wife upset. I asked what’s wrong and she told me that my mother rejected the sample she sent and decided to exclude her baking from the food list/menu for christmas this year. I didn’t know what to say but she then told me she was backing out of the invitation to attend christmas with my family.

I was stunned when I heard her make this statement. I tried to talk to her but she said “it was done” I called her unreasonable to decide to bail on the whole family over some cookie sample…that’s just freaking crazy and quite unreasonable.

We had a full on argument about it and she stated that my mother caused this but I told her that my mother is pretty serious and careful about the food she offers to the guests since we are going to have relatives coming from all sides of country. She told me to stop mentioing it.

Later I heard her cry despite telling her that her baking is amazing and people have preferences that’s all.

AITA for insisting that her decision was unreasonable?”

Take a look at how folks reacted on Reddit. 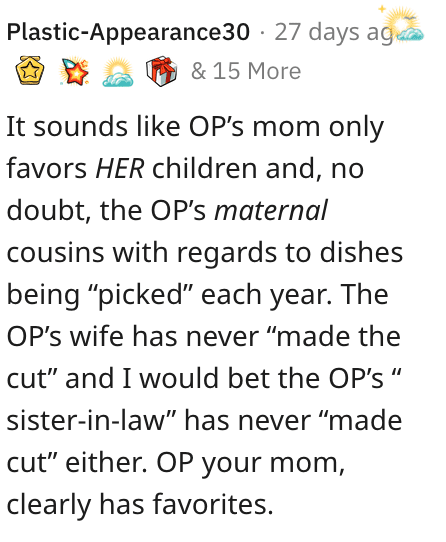 And another Reddit user said his wife is entitled to have a nice Christmas where she can enjoy herself. 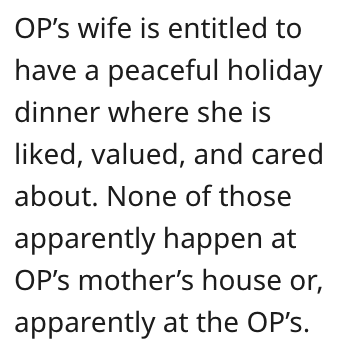 Another individual said this guy and his mother are the a**holes in this story.