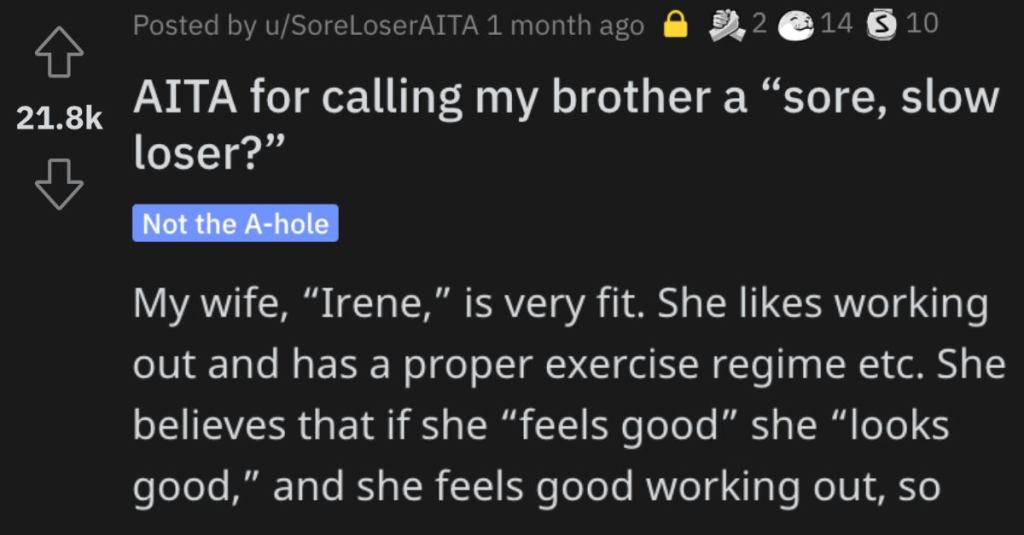 Getting called a sore loser never feels good…but I think we can all agree that it’s sometimes warranted.

And every situation is different, ya know?

Take a look at this story from the “Am I the A**hole?” page on Reddit and see if you think this guy took things too far with his brother.

AITA for calling my brother a “sore, slow loser?”

“My wife, “Irene,” is very fit. She likes working out and has a proper exercise regime etc. She believes that if she “feels good” she “looks good,” and she feels good working out, so who am I to stop her?

My brother, “Will,” spent the latter half of last year going through a messy divorce and now needs a place to stay. Though my brother and I aren’t very close, I figured he would only stay with us for a couple weeks until he got back on his feet.

Will is a typical “gym rat.” He’s always on a very strict diet, always working out and bragging about his “gains.” I’ve worked out with him a few times and he’s a little obnoxious. He’s always mad at you if you don’t work at his pace and is always trying to correct your form. He’s a pretty fit and muscular guy, but I don’t like to exercise with him.

Will has been pushing Irene to workout with him because, according to him, “she won’t be able to keep up with him.” Irene mostly just shrugs him off with a laugh and tells him she would love to workout with him. Irene works out in the mornings (3 times a week) and then does a run in the evening, but she’s been busy this past week and hasn’t been able to stick to her usual schedule. Will thinks that she’s making excuses because she doesn’t want to be “embarrassed” by him. Again, Irene just laughs him off.

About two days ago, Irene and Will went on an early morning run. I didn’t go with them, but the first thing I heard when Will entered the house was, “The only reason I couldn’t keep up with you (Irene) is because you were sweating too much.” I found this extremely comical, and kinda just laughed him off. Irene rolled her eyes and went to take a shower, so I thought that the conversation would die.

However, Will just kept bringing up my wife’s sweat.

My wife went to work and he told her, “to make sure she doesn’t sweat through her clothes,” or when she called me in the middle of day, he yelled, “tell the sweaty b**ch I said hi.” Of course, the b**ch comment aggravated me and I told him to knock it off and stop acting like a child.

I thought that was the end of it, but he just kept going. By the end of the day, I was tired of his comments, but Irene seemed rather unphased by them. When she served him food, he made a comment about her “sweating into the food.” At this point, I was at my wits end and I told him to stop acting like a “sore, slow (referring to his running pace) loser and eat his food.”

Will, of course got angry, and said the only reason he was going slower than usual was because he was “distracted by my wife’s unhygienic sweat.” Irene looked a bit offended by this, and I told Will that I would kick him out if he made another comment like that.

He’s been super pi**ed ever since. I jokingly told this story to a mutual friend and they agreed with Will. Maybe I shouldn’t be so harsh.

And now let’s see what Reddit users said about this.

This reader said that this guy is NTA but it sounds like his brother and his friend sure are. 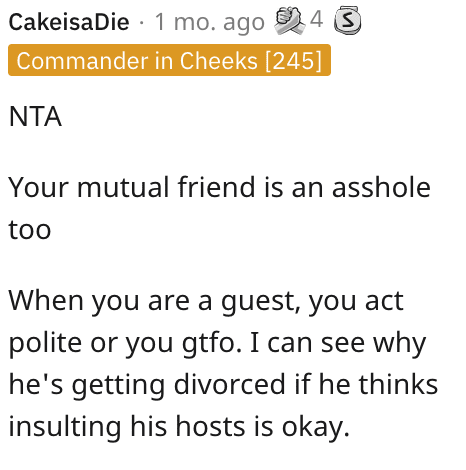 Another Reddit user brought up a very good point… 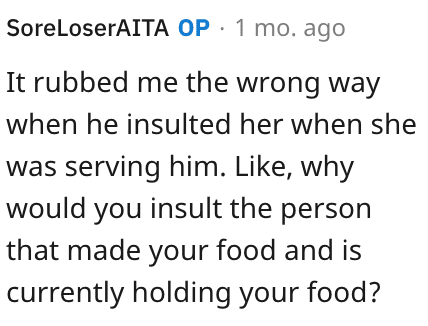 And this individual said maybe the brother and the mutual friend need to live together.