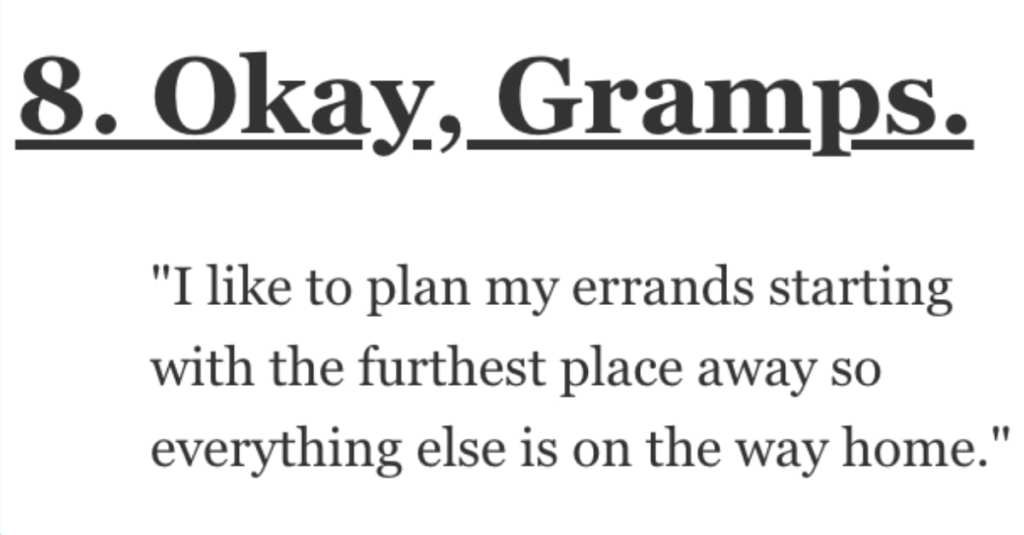 I got news for all you young whippersnappers out there…

You’re not gonna be young forever! And yes, a majority of you ARE going to turn into your parents, at least on some level.

“I have more than one measuring tape.

One for upstairs and one for downstairs and I complain when my family doesn’t put them back where they belong.”

“My housemate: you want a drink?

My housemate: You stopped drinking?

Me: I’m not SOBER or anything, it’s just that alcohol makes me sleepy.”

“Had a riveting conversation with some friends about the best office chairs for lumbar support.”

“My knees hurt, my elbow hurts, I get up at 4 am to go to a job that doesn’t pay me enough, I got bills that cost too high, I got a mortgage to pay off.

But on pretzel day?

“You want to go out for dinner?

Oh no, I can’t; I have chicken in the fridge that I have to cook before it goes bad.”

“Scrolling through my Spotify and constantly asking, who the hell are these people?”

“”Oh no thank, you. I can’t have caffeine this late in the day or I’ll never get to sleep tonight.”

My spouse was offering me the last soda from the fridge. It was 1 pm.”

“I like to plan my errands starting with the furthest place away so everything else is on the way home.”

To make it worse, it was a Saturday night.”

“After recently installing a replacement security camera, I saw in the saved footage some kids repeatedly riding their bikes and/or playing in my driveway, occasionally hitting the shrubs that line the driveway and scattering gravel/compost around.

Then I froze, and realized… I’d become that guy. That old guy.

It has sparked an existential crisis.”

“I was venting to a coworker about these noisy bastards living next to me.

I actually said the words, “god**mn teenagers and their Bluetooth machines”.

I stand by my admonition but man it was my greatest age leap forward since I embraced the sensible Toyota.”

“I slapped a crate I had strapped onto the back of my car and said “This isn’t going anywhere”.”

“Not something I said but I just stood out on my porch this morning drinking my coffee and someone drove by pretty fast and I thought “that’s way too fast”.”

“When my wife asked if there was anything she need to pick up at the store, and I responded: “I think we’re out of asparagus.”

Not sure what foul demon possessed me to to say those words.”

What’s the most middle-aged thing you’ve caught yourself saying recently?