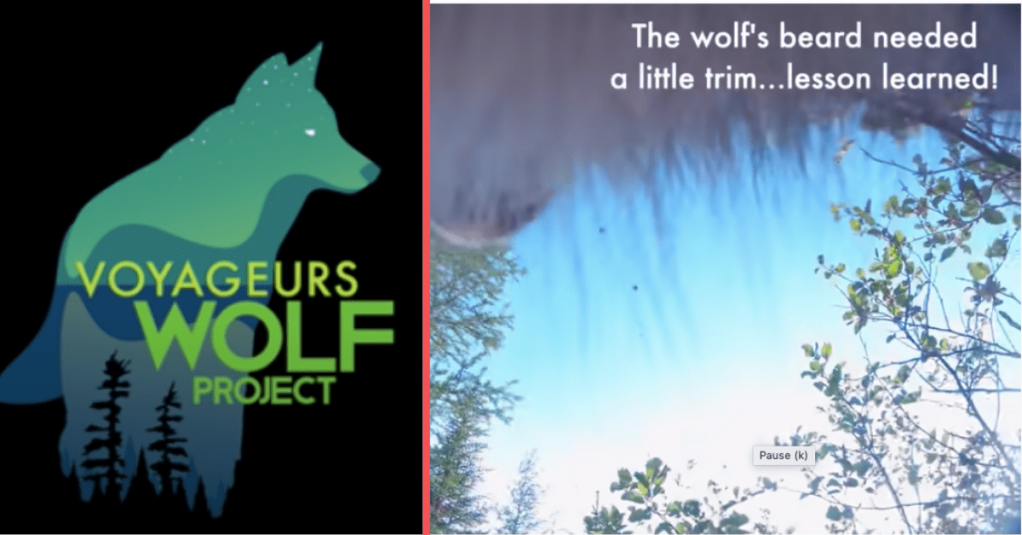 Animals are my favorite, the wilder the better.

I love that they manage to live these secret lives that we still barely understand.

It makes things all the more interesting when intrepid researchers are able to uncover new insights into animal behavior.

And it’s always fun to learn what kinds of studies are happening at different institutions around the country.

For example, did you know that the University of Minnesota leads a lupine research program called Voyageurs Wolf Project?

In addition to having a very cool logo, the Voyageurs Wolf Project monitors and tags different wolf packs in North America.

According to their website, the project was originally organized to:

Provide a comprehensive understanding of the summer ecology of wolves in the Greater Voyageurs Ecosystem in northern Minnesota.

Specifically, we want to understand the predation behavior and reproductive ecology (e.g., number of pups born, where wolves have dens, etc) of wolves during the summer.

To that end, the researchers tag pups, monitor their dens, and then collar older wolves for tracking purposes.

We collared our 1st wolf of the season yesterday and what a cool way to start! The wolf (Wolf O0̸C) was a yearling who we tagged as a pup last year at the Fawn Crick Pack den. Wolf O0̸C was a chunky pup as you can see in the photo below! What a difference a year makes! (1/7) pic.twitter.com/jnmPhtxjSJ

They have caught fascinating video of wolves and other wildlife through the many cameras that they have set up in the area, such as this one, of wolves chowing down on blueberries:

I knew my dog liked frozen blueberries, but who knew it was a staple of the wolf diet? (Scientists did.)

They have also provided a very helpful night-vision video highlighting the differences between similar species that prowl after dark:

Telling carnivores apart in the Northwoods can be tricky at times. Many folks send us pics asking “Is this a coyote or wolf?” or “Is this a bobcat or lynx?”. Hopefully this little video from a trail camera we had out this winter helps a bit with identifying these animals (1/2) pic.twitter.com/N91jnThAog

But the video that recently went viral, complete with audio, shows almost three minutes of footage from the wolf’s perspective.

The first of it’s kind!

The camera was attached to the collar under the wolf’s chin, and was designed to eventually fall off so the researchers could recover it later.

BIG news coming Wednesday morning! You won’t want to miss it! Here is a hint… pic.twitter.com/xxRhTH1F6p

And who knew that you could learn so much from quick bursts of video from the perspective of a wild animal?

The Minnesota researchers were particularly interested in the Lone Wolf’s ability to fish.

What is particularly fascinating is that this wolf (V089, a lone wolf) knew how to hunt and catch fish. He can be seen eating 3 different fish, which were all killed and consumed at the same spot along the Ash River. (2/6)

As IFL Science points out:

It’s known that wolves in Alaska and parts of Canada hunt fish during salmon spawning season, but this footage strongly suggests wolves are enjoying a spot of fishing all over the place, not just in salmon-spawning areas where the fish practically throw themselves on to the dinner plate. V089 even seems to have set up its fishing spot by a beaver dam, waiting to snag the fish that can’t get through, which is rather crafty.

Based on the amount of time this wolf spent in this spot (>1 week!), it is clear this wolf killed more than 3 fish. However, the collar only took videos for 30 seconds at the beginning of every hour of daylight meaning we only got 7 minutes of video footage each day. (3/6)

Only 7 minutes of footage a day for 6 weeks, but still so much to learn, and the research team made the most of it.

This revelation—in addition to some other info we learned in 2020 (i.e., we had another wolf from the Paradise Pack that went fishing…more about this soon!)—provides insight into the genesis and persistence of unique predation behaviors in wolf populations! (5/6)

Who knew that we could advance science by watching a wolf eat dinner?

But the team aren’t stopping there. These fancy collars are here to stay.

We used a Vectronic-Aerospace camera collar for this footage. The collar worked great and we are excited to deploy more of these camera collars in the future! (6/6)

Next time, though, they plan to give the wolves a little grooming first, so that their beards won’t block the cameras.

With a total of nearly 5 hours of footage, I sure hope they release more videos soon!

For more fun videos, as well as adorable pictures of countless fuzzy wolf pups, check out their Instagram account @voyageurswolfproject.

This video of a territorial border between two rival packs is particularly fascinating.


Isn’t their work amazing? What other animals would you like to spy on and spend a “day in the life” of in the wild? Let us know in the comments.