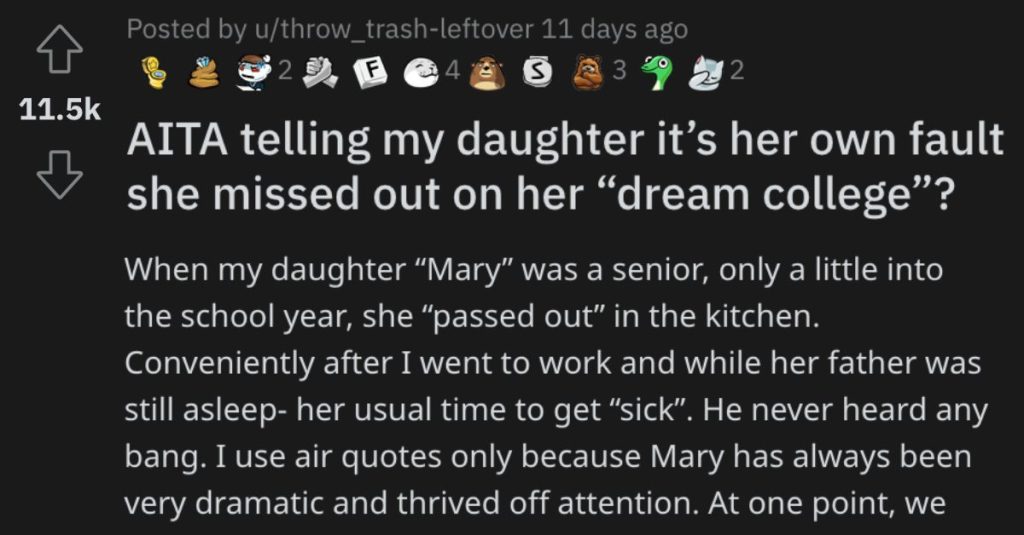 It’s all your fault!

Well, that’s never a good thing to hear, now is it?

But this mother wants to know if she was wrong for laying it on thick with her daughter…take a look at what happened.

AITA telling my daughter it’s her own fault she missed out on her “dream college”?

“When my daughter “Mary” was a senior, only a little into the school year, she “passed out” in the kitchen.

Conveniently after I went to work and while her father was still asleep- her usual time to get “sick”. He never heard any bang. I use air quotes only because Mary has always been very dramatic and thrived off attention.

At one point, we debated getting her checked for some sort of disorder, but ultimately decided not to because she was skilled at manipulating doctors to believe her lies even as a child.

Example: at six, Mary had this whole imaginary friend that, when her father and I confronted her, she admitted was made up. We pulled her from therapy then.

During all her school years, she was a terror. We were constantly embarrassed in the guidance counselor’s office, pleading our case as parents doing our best. She didn’t turn in her homework, she had behavioral problems, she was “sick” more than anyone I’ve ever known to be.

But back to the concussion. Immediately after the incident Mary planted herself facedown on the couch and texted me (apparently screens didn’t bother her too much then) that she hit her head. I kept asking what happened and she said she didn’t know, I called her and she kept saying the same thing, that her head hurt.

She stayed on the couch until the bus came and went. When her father got up and saw her there, he ended up taking her to the doctor at their first available appointment where she was diagnosed with a concussion. It lasted past Christmas.

She was cleared to go back in November but only for half days, but we both worked until 4pm or later. While I tried to get her to try going back for full days, she gave up and claimed it hurt too much, so we let her stay home to heal.

Well as you can imagine, with less than half the time of the other kids, Mary’s academic success was bottom of the barrel. Plus she had to drop out of her AP courses, being too far behind.

Add in the fact she slacked and slept entire days away while “sick” constantly and her college pickings were slim. We doubted she would get many acceptances honestly, but she did manage a scholarship to her ‘dream college’ that halved the costs. (She’d never mentioned it before)

We got as far as orientation before we realized even with the scholarship, and financial aid, we couldn’t do the cost. I did my best and brought her to the bank for a loan, but she couldn’t get what she needed.

She has never forgiven us, constantly claiming that we should have saved more, rather than she should have applied herself, or managed her time better to get a job. I told her that she brought this on herself, that we warned her this would happen, and that she could have put in more effort. I said “every assignment you never turned in is a dollar you pi**ed away”.

She hasn’t spoken to us since, and she’s ignored every time I or her father tries to reach out.”

This reader said that this woman is the a**hole and that they find this situation to be “mind-boggling.” 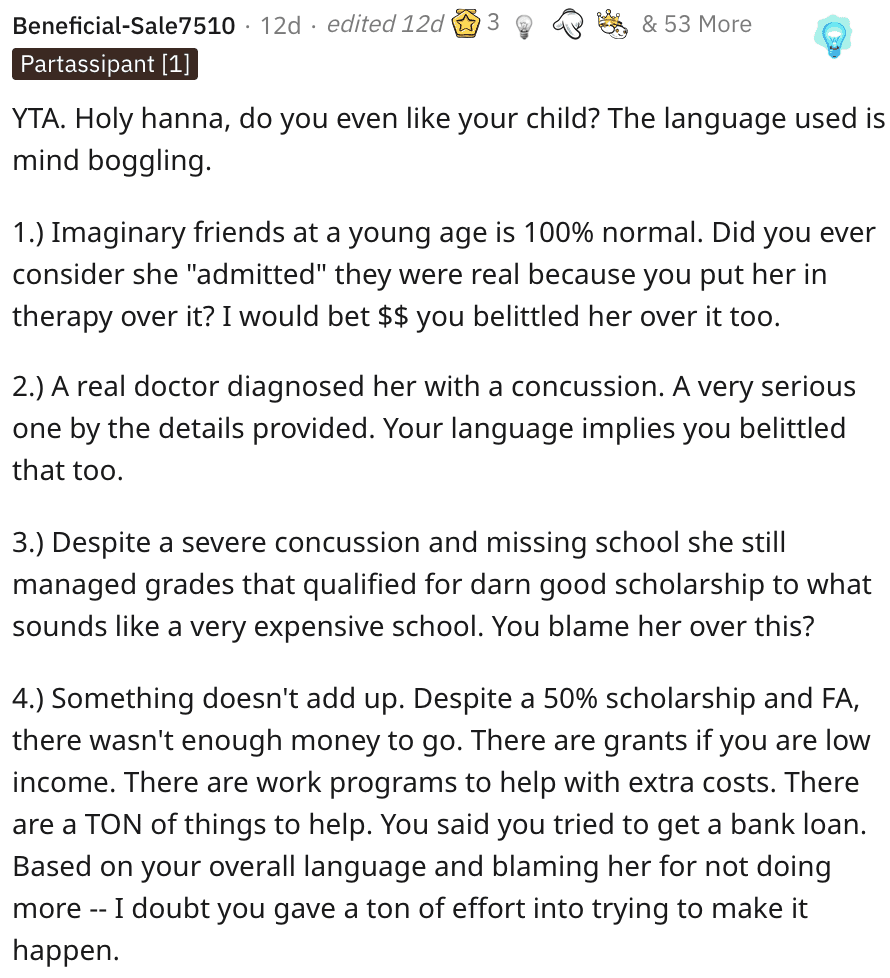 Another reader said that these parents are flat-out crazy. 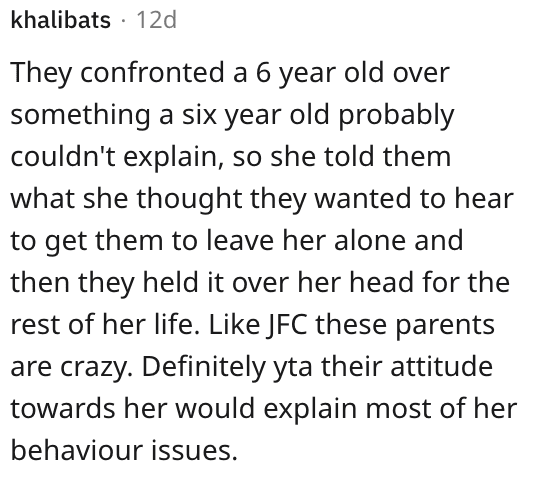 And this individual was speechless over how this child was treated. 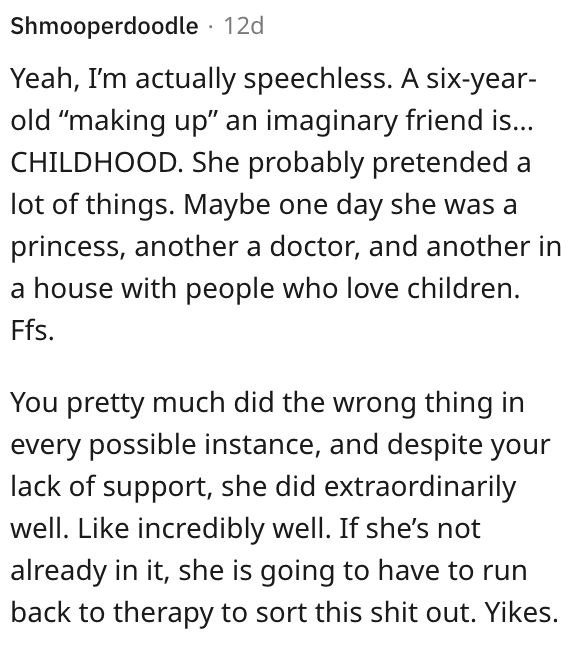 Lastly, this reader said that this woman is not only an a**hole, but she thinks she’s REALLY smart. 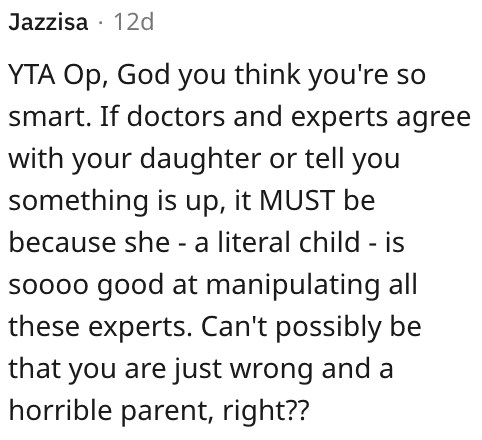