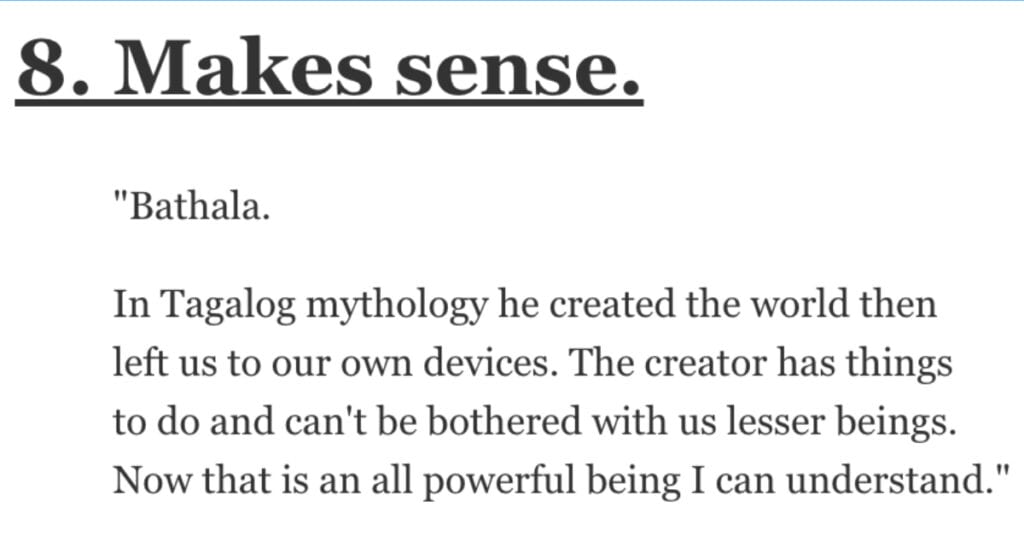 Non-Religious People, What Is Your Favorite God and Why? Let’s Take a Look at the Answers.

I’m not a religious person. At all.

I was raised Catholic but for some reason, it just went in one ear and out the other for me. And, on top of that, I don’t know ANYTHING about other gods out there.

So that’s why I’m excited to hear responses!

What is your favorite god and why?

Folks on AskReddit shared their opinions on this matter.

The goddess of volcanos and things stuck in drawers.”

Dionysus was not just a party guy that you’d expect at Eurovision. He could give life, make milk come up from the earth, make the trees leak honey. But he could be equally destructive and ruthless when he wasn’t obeyed, when his power was in doubt.

Indeed, Pentheus experienced this to the fullest extence. He is much more complex with his theme of birth, d**th and rebirth than people make him out to be and I feel like it kinda does the old stories a disservice.”

He sacrificed an eye, and hung on a tree to gain knowledge. He has pet ravens that bring him news, a spear that never misses, and an 8-legged horse.

Honorable mention: Tyr- sacrificed his hand to bind Fenrir, is Thor’s contemporary/equal/brother (potentially, depends on the source, he could also be the son of the jötunn [giant] Hymir.).”

She’s the Greek goddess of chaos and discord. When Zeus threw a raging party but didn’t invite Eris, she showed up anyway.

She threw a solid gold apple, with the words “to the prettiest” inscribed on it, into the room, and three Greek goddess started cat fighting over it.”

“Prometheus was a good dude.

He was a true bro, only one who cared about us little people.”

“Hestia, being goddess of the hearth seems like she would give the best hugs after a hard day.

Warm and comforting, like a blanket and hot chocolate in front of a warm fire on a snowy winter evening.”

She was in charge of love, fertility, battle, and d**th.

She could be bada** and feminine all at the same time.

Also, she had a chariot pulled by cats.”

In Tagalog mythology he created the world then left us to our own devices. The creator has things to do and can’t be bothered with us lesser beings.

Now that is an all powerful being I can understand.”

“I love Egyptian mythology and cats so Bastet is an obvious choice!

I also really like how according to their mythology, the goddess Isis invented mummification in order to reunite her brothers/husbands body, Osiris.”

So I accidentally found myself “worshipping” Hermes because it became a habit.

I’d see a pile of stones on a trail and add one to it. IIRC the name Hermes actually comes from Herms, the pile of stones marking trails and borders which is why Hermes is the god of trails, borders, commerce and travelers.

So I started adding a stone to them and I’d say “keep me safe Hermes” as passing comment and after months of doing it, a ritual.

It’s been going so long now that I have a small statue of him with train tickets from the subways I’ve been to and I call my car my “caduceus”.”

Back when I was Catholic I was confirmed using Saint Brigid’s name. The goddess was actually Christianized from the old religion.

“Tezcatlipoca, AKA the smoking mirror.

The Aztec god of night and sorcery, as well as the patron deity of Aztec kings and young warriors.”

Universe had to come from somewhere.

Giant spider weaving it into existence makes more sense than a lot of the other origin stories.”

“Fortuna the Roman goddess of luck.

I read a book about ancient Rome and supposedly you were supposed to choose a personal god to guide you through life.

There was one emperor that chose Fortuna and he was one of the only ones to make it to old age and lived a relatively unscandalous life compared to the rest.”

‘Fess up in the comments!